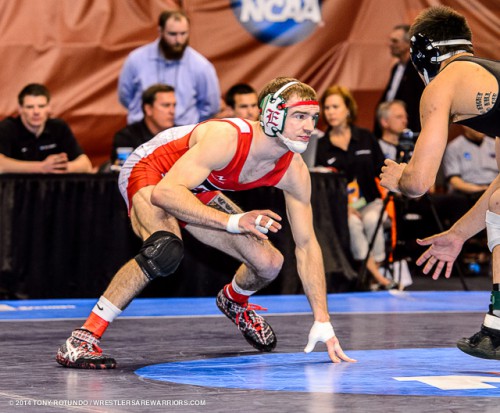 Finally some wrestling news! If you are like me you are super excited that the NWCA has announced it’s first matchup for the All-Star dual, which takes place at the University of Penn in Novemeber. Why is this news so exciting you might ask? Because it means the season is just around the corner.

We have finally received some confirmation from the NWCA that one of the matchups will feature the two top returning All-Americans at 133 – AJ Schopp of Edinboro and Mason Beckman of Lehigh. This will be the second straight year that the duo will face off at this event, with last year Beckman getting the better of Schopp 5-1. Beckman/Schopp would have faced Iowan Tony Ramos, but he elected to go to 141 where he faced (and then defeated) Devin Carter. This is also Schopp’s third All-Star appearance, as he defeated Minnesota’s Chris Dardanes two years ago at the event.

Last year Iowa faced both Edinboro and Lehigh in dual competition, but this year Iowa would only face off with Edinboro opponents at the Midland tournament at the end of December. Given that Schopp was one of two wrestlers to hand Tony Ramos a loss last season, Hawkeye fans should be interested to see how Cory Clark, who is moving into this weight class after making the All-American stand at 125, matches up with the presumably favorite to win this weight class in March.

ISU’s Earl Hall may get a crack at Beckman as both teams will be attending the Southern Scuffle to kick off the 2015 portion of the season.