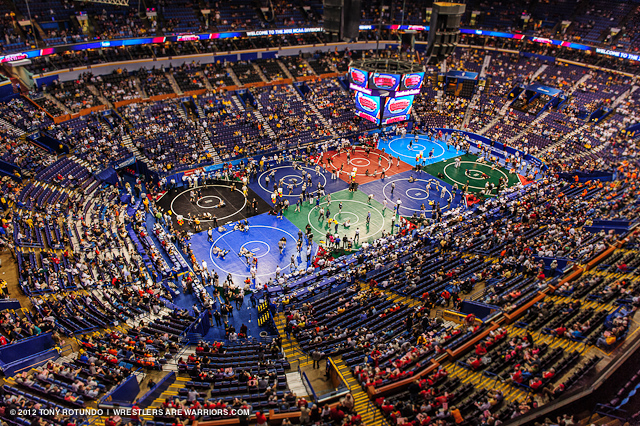 It should be noted that up until last weekend this list was completely up to date, but with the quite a few recruits committing this weekend (or Tuesday in ISU’s case), someone may have been missed in the shuffle. This will eventually be corrected as the season progresses for now, these rankings should reflect the current standings as of 9/17/14.

First thing to note about these rankings is that I have used a combination of Earl’s D1 College Wrestling and Associated Wrestling Press’s rankings. Why these two? Because they both offer rankings that are free to the public to use. That being said, AWP is pretty new to the ranking game, so I decided to go ahead and give his ranking slightly more weight (in essence it’s not a true average, but a weighted average) This isn’t a knock on AWP, we have just seen a longer track record of Earl’s rankings, and we know he is one of the best evaluators out there. A final note, if AWP didn’t have a wrestler ranked, I just used Earl’s ranking (again, he’s proven to be pretty good at this), also AWP includes Honorable mention wrestlers which are classified as 101-150, so those names will be included as well. On to the teams.

Zeke Jones is off to a tremendous start in Tempe as of the top 10 wrestlers to have verbaled, he has three of those. When you factor in that the two Valencia brothers are top four, it’s going to be even harder to top. Then you add in Shields and Maruca, you have to wonder if Zeke is going to share any recruits with the rest of Division I wrestling.

Minnesota has a great class adding two more top 25 recruits to Stevenson. When you start with a top 10, you are usually going to have a solid class even with a few minor additions. J-Rob adding two top tier middleweights only strengthened their right to be right behind Arizona State.

Virginia got their first three ranked wrestlers early in the recruiting season which set them up to have some fast momentum they then added in another top 150 in Corbin Allen. I am not sure how much more Virginia will be able to add, but they have a pretty good chance at staying in the top ten depending how much the talent spreads out.

Currently giving the nod to Oklahoma State here as they have addressed three needs in the class so far. With “only” three top 50 recruits their spot is by no means safe to stay in the top five, as quite a few teams could gain momentum with it being so early.

This class was still in the top ten, but was right at #7 until top 30 recruit Lujan committed. As if a class headlined by in state studs Thomsen and Steiert, Schwab added an even more impactful recruit this month. Lujan, who is also the classes best addition, is projected at 174. It appears that this class really strengthened the middle of the future Panther lineup.

Michigan is a team that is right on the heels of the Northern Iowa trio. Usually there are tiers of talent, with the top ten guys usually performing up their higher standard, and the top five guys performing to an ever higher standard (i.e. living up to the ranking). With #2 Logan Massa on board, the Wolverines only need a top 50-70 wrestler to make a case to over take the #5 team spot.

With the addition of Dylan Wisman, Missouri jumps from the low teens, right to #7. Wisman is one of the top 184 recruits, and Clayton is a top 141 recruit. I would say Missouri isn’t quite done with their class as Ke-Shawn Hayes (the #7 overall recruit) remains uncommitted and sits right in their backyard.

Another team that has seen it’s fortune skyrocket this past month. Duggan announced a few weeks ago, and Moore on just a day later that they would be a part of Sammie Henson’s first recruiting class. There is no one else with two top 30 recruits so they are the easy choice here.

With one top 20 recruit, and then the addition of Carver James (AWP has him #99) Illinois sits inside the top ten, but shouldn’t get too comfortable without another addition. There is still quite a bit of talent available, and Illinois is always a rich state (talent-wise) to draw from so they should have little issue finding guys to add.

At this stage it matters how highly you rate having one top-tier recruit as opposed to having two mid-to-backend 100 guys. I would say having a top 12 guy out ranks the last school to have two ranked verbal commitments. This means that while ISU and NDSU have two top 100 guys, having a guy like Kelly – who is closer to a sure thing since he is ranked higher – get’s the edge for the #10 spot. Although an addition by any school listed below threatens to take their spot in the top ten.

You can also watch me discuss the rankings on last night’s Cross Face Episode: