Albia Wrestling is Back in Business 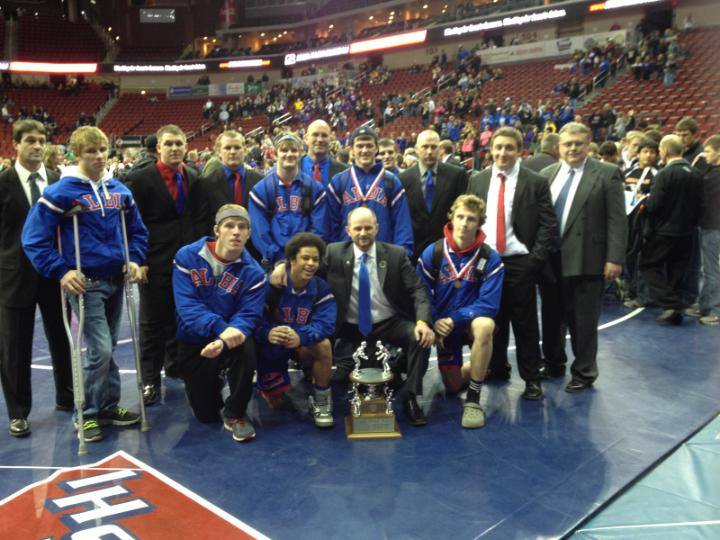 It was once written that it’s not the destination, but it’s the journey.  Nothing could be more true for the Albia wrestling program over the course of the last several years.  The 2013-14 season, which happened to be the 50th in the program’s history, was a season that won’t be forgotten any time soon.  The Blue Demons won 33 duals, finished 5th in the state duals, and followed that up with a 3rd place finish in the traditional tournament, which were all-time bests.  However, the journey to prominence proved to be a rather long and winding road.

The story behind them getting to this point is the real story. Following the 2008-09 wrestling season, decisions were made administratively to turn Albia’s existing wrestling room into a weight room, which was in dire need of an upgrade.  The administration also felt the need to make weight lifting a part of the curriculum. As it ended up, the only viable space was the one that the wrestlers had occupied for their practices, which happened to be connected to the varsity gymnasium.

It made a lot of sense, but when various plans were in place to relocate the wrestling team it didn’t materialize as expected, the administration and wrestling staff were left scrambling to find a different practice facility. “We looked at several different scenarios. On paper, they all looked to be viable options,” said Head Wrestling Coach Dave Wenger.  “However, when we went ahead with the plans, circumstances beyond our control prevented us from making things happen the way we had hoped they would.”   With wrestling season right around the corner, the decision was made to hold the practices in the Lincoln Center gym, which also served as the cafeteria for grades three through six.  “It was really the only option that we had at that point and time,” said Wenger

As it turned out, the Lincoln Center was certainly functional for Albia’s wrestlers and coaching staff, however it left a lot to be desired.  Mats needed to be rolled out before practice each day and rolled back up at the conclusion of practice which cut into a lot of instructional time.  It became very difficult to maintain the temperature in the gym on cold winter days and the space needed to be thoroughly cleaned each night to accommodate breakfast and lunch for students the next day.  There were also some safety concerns wrestling in the middle of a gym floor that had large sliding glass windows down one side.  All-in-all, a different option needed to be considered.

At the conclusion of the 2009 season, Wenger, who is also a 1985 graduate of Albia High School, set out on a quest to find a solution to their problems.  After talking to several community members and wrestling supporters, it was agreed upon that if they put their heads together, they could come up with a plan to build a new facility to accommodate the wrestling team.  After several brainstorming sessions, the group felt comfortable enough to take a proposal to the Albia School Board.  “We had a number of issues that needed to be addressed above and beyond simply funding the building of the facility,” said Coach Wenger.  “We had to choose the correct location.  Would it be added to the existing high school building or would we build a free standing, self-contained building?  We got to the point where we wanted to maximize the space allotted to us in the most efficient manner possible.  There were way more things to take into consideration that we would had ever imagined.”

After sitting through nearly a dozen School Board meetings over the course of time, the general consensus by the Board, Administration, and wrestling supporters alike was to utilize a space near Albia’s newly constructed track complex to build the project.  The decision was made to construct a 60’ X 110’ free standing steel framed building that would provide a nearly perfect floor plan to accommodate not only the high school and junior high wrestling teams, but also a few other activities that require a soft surface to practice on.

After Board approval, the work began immediately in September of 2010.  After the footings were dug, the floor was poured and the steel structure was erected, it was then that the wrestling supporters from Albia banded together to complete the inside.  Headed by Albia’s Building and Grounds Director Sam Kirby, an influx of volunteers came to the forefront to help complete the project.  Framers, sheetrockers, painters, and other general laborers came in to complete the remainder of the wrestling room.  “Many people in our community came in on their own time to help us out with the project,” stated Coach Wenger.  “Volunteers came in after they got off work on weekdays and they spent their entire weekends at the room working.  Once people started seeing progress, we couldn’t keep them away.  Many community members have their fingerprints on our wrestling room. It was a pretty cool thing to be a part of.”

On August 18, 2011, the Mordan Activities Center was formally dedicated and put into use.  It was named after Albia’s first wrestling coach, Charles Mordan and his wife Margaret.  Coach Mordan established Albia’s wrestling program in 1964 and also served as the coach to current head coach Dave Wenger.  In all, the Mordan’s served the Albia Community Schools for an incredible 91 combined years.  “Coach Mordan molded a lot of boys into men,” said Coach Wenger.  “The naming of the building is certainly justified.”

As the building became functional, there was still one thing missing.  Former Albia wrestler Joe Anderson came to Coach Wenger for a special suggestion.  Upon learning that he had cancer, Anderson had insisted that trophy cases be built for the wrestling room.  “I didn’t think much of it,” said Coach Wenger.  “Joe was a friend and teammate of mine and I just sort of put his idea aside for the time being.  Things just got busy and it simply didn’t get done the way it should have.”  On April 24, 2013, Anderson lost his battle with cancer, dying at the age of 46.  His wish of new trophy cases for the wrestling room had not been granted.

Again, volunteers from the community came to the rescue.  Led by the Joe’s family, trophy cases were built in honor of him.  The cases are displayed at the main entrance of the wrestling room for all to see.  Although Joe didn’t live to see the completed project, the cases were dedicated in his honor and now house the 2014 state tournament trophies from both the state dual tournament and the individual tournament.  “I’m not happy that we didn’t get them done before we lost Joe,” added Coach Wenger, “It happened the way it did for a reason.  We definitely felt Joe’s presence during the state tournament last year and we knew that we had to pull through to get some hardware put in those trophy cases.”  Without question, it was a fitting exclamation point to put on the entire project.

The Mordan Activity Center is now a fully functional, self-contained wrestling facility.  It has two full sized 40’ X 40’ mats with elliptical equipment as well as a treadmill.  There is an ample amount of storage space for equipment and it has a utility room complete with a new washer and dryer that was donated by Albia Motor Company, a local auto dealership.  “Dirty laundry doesn’t leave our facility.  It is all taken care of in-house,” added Wenger.  There are 40 full sized lockers lining the walls of the locker room with seven individual shower stalls included. Office space for the coaching staff surrounds the back side of the wrestling room, complete with everything that the staff needs to deal with their day-to-day business.  Signs surround the room recognizing Albia’s 37 state medalists.  A separate section of the wall is sectioned off for the state championship bracket and medal earned by Nick Pickerell in 2005, the only state champion in school history.  “We like to have that championship bracket up on the wall for the guys to look at on a daily basis,” said Coach Wenger.  “Hopefully it gives them motivation to get their name up on that side of the room.”

In the three short years that the Mordan Activity Center has been into use, Albia has cranked out 16 state qualifiers with 9 of them being state medalists.  Pickerell, who is now on the Blue Demon staff as an assistant coach stated, “There is something special building in that room and really it all started with the room itself.”

It might not be a case of “If you build it they will come,” but it certainly hasn’t hurt.

Take a tour with us through the Albia wrestling facilities.