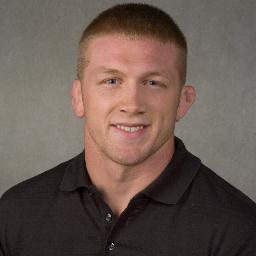 When people heard that Ryan Morningstar was coming back to Fargo as part of Team Iowa, there were a lot of wrestlers who were running for the exits and shaking in their singlets. They had seen him destroy his competition in high school, and heard legend of how he could most likely beat everyone in his bracket on only one good leg.

But in reality Ryan was just there to just coach Team Iowa, which is probably why it was so windy that week, as wrestlers in Fargo let out a giant sigh of relief (okay, now I am done with the jokes). Ryan gave an interview while at Fargo (and it was with Shane Sparks!) and I thought there were some very good takeaways:

Sparks : “You guys are losing a couple hammers in Ramos, St. John, and Lofthouse. Those guys were All-Americans, you guys don’t rebuild, you kind of reload. What are your thoughts here in late July?”
Morningstar : “Well were excited about the guys that will be stepping into the lineup. You know Sam Brooks he was behind Lofthouse, he’s a guy who can step in and do damage right away. Thomas Gilman will more than likely be at 125, and Cory Clark going to 133. So those are some of the guys who can do some damage, along with Brandon Sorensen, he will be a freshman this year and he was 3rd at the Midlands last year. We’re excited about the guys that have a possibility to be in the lineup.”

I think you could leave the interview right there and fans can have their main takeaway. For those wondering who is going to be at 125? Will it be Clark again or will it be Gilman? You kind of just got your answer. I know last week Gilman didn’t try to tip his hand too much while getting ready for Junior World’s, but this coming from Morningstar is pretty telling that the plan appears to be what many have expected all along. Gilman joining the lineup at 125, with Clark bumping.

Sparks : What will you miss most from Ramos, St. John, and Lofthouse from a leadership standpoint?
Morningstar : They are hard to replace. You got a guy like Tony Ramos who does everything right, St. John who is a silent leader and is tough as nails, and Lofthouse who has won a lot of matches in a Hawkeye singlet..we’re going to miss those guys, but now other guys will have their chance.

Sparks : What will you miss most about the staredown, Tony Ramos?
Morningstar : It brought another factor to the crowd, something for them to look forward to and now the younger guys are having their chance in the limelight will have to please the crowd in some way like Ramos did.

Sparks : What are the biggest questions marks, or what are you most excited to see played out this season?
Morningstar : “We have questions at 141, 149, and 157 and we are looking forward to see how that plays out. We’re looking for guys to step in and do some damage. It’s always exciting getting new blood in there to build your program.”

Sparks : “Iowa has had a great summer with guys like Gilman, Ramos, Metcalf, McDonough. Some good things going on in that room. I know Ramos recently said in an interview ‘If your a lightweight and don’t go to Iowa something is wrong’. Obviously results speak for themselves, but the Hawkeye Wrestling Club has had a great year.”
Morningstar : “Yeah, we’ve had a great year and we want to keep building off that. We have some good lower weight guys, Metcalf a middle weight, but we want to keep building. Ramos said it’s a good place for a lightweight guy to be, but it’s a good place for any guy to be and that’s the truth.”

While the last crop of seniors will be missed it looks like the coaching staff is pretty pumped up about getting their new guys into this lineup. This will be the first year that the core of those two #1 overall recruiting classes will be taking the mat (those guys being the seniors Evans, Telford, Moore and the sophomores Gilman, Clark, and Brooks). My hats off to Sparks for asking Morningstar some great questions, and another hat tip to Morningstar for giving some good responses.

That was only about half of the interview, so I encourage you to go to Badger State Wrestling and listen to the entire thing. Some comments about Terry, Tom, and Ryan talking about competing in the room back when he was in college. Go listen to it if you have ten minutes to spare.