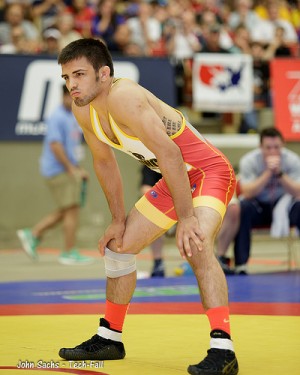 The end of 2013 was kind of tough to watch for Iowa fans, as they saw their star wrestler take a couple lumps with many questioning his chances at ever getting that NCAA title. Since the calendar flipped over to 2014, everything has been coming up Tony. In the spring we watched him win his first conference and national title as a collegian. In the summer we saw him tear through Madison and claim the 57 KG spot, and later we saw him win his first Senior level international event in Canada. Tony even found time to get married this summer! Yes it has been quite the year for the former Hawkeye and last on his checklist is winning a World Title in Uzbekistan to put the ultimate cherry on top.

Ramos recently set up a Go Fund Me page so he can help offset the costs of his family traveling with him to the World Tournament this September. It should come as no surprise that Tony would like to have his family with him supporting him. Who can forget this moment, after just claiming his NCAA title, Ramos ran into the stands to embrace with his family as he finally reached the dream he had been chasing for all of those years.

Gable once said that his loss in college made him a better wrestler and coach than if he would have never lost. Do you think your two losses this past season ended up having a positive effect on you in the long run?

The two losses last season showed me where I was vulnerable in positions which helped me decrease my weaknesses.

You are pretty lucky being able to work out with the 3rd best 57 kg wrestler on a pretty regular basis. Does it get pretty intense when you scrap with McDonough?

McDonough and I do not workout very much. When we do it’s good to get that top level competition in practice so you are very prepared come go time.

Would McDonough be going with you to World’s, or who will you be bringing along as a training partner?

He will not be going with I will be taking Daniel Dennis.

Your win over Escobedo really got people’s attention. Do you think getting a win over such a good opponent early on in the Trials helped propel you through the finals?

To me I knew I could and can beat anyone who steps across the line from me so it didn’t do much for me. But for the fans, it showed them that I am a contender and much better than they assumed.

I know during the NCAA finals you said you were wrestling tight, what have you done to open back up and get back to your more aggressive style?

That went away on its own. I wasn’t on a clock running out of time to achieve a lifelong dream. In the Olympics and Worlds you can wrestle as long as your body holds up or you want to. It’s not four tries and you’re done forever.

During the Best of three finals you gave Haze the stare down, and he kind of just smirked. Did that fire you up?

No. I stayed focused and knew something like that would happen. He is a coach at the college level and wanted to try and make a point that it is not all it’s hyped up to be.

I noticed Haze made a point to stand behind you before the second match. Do you think he was avoiding the stare?

I think he realized that it’s not some front that I put up and that it’s real and he felt what all my other opponents do. He had to look his fear in the face and didn’t want to.

Have you learned how to say “fear the stare” in Uzbekistan?

You brought home Gold in your first senior level international tournament, how do you think the Canada Cup made you better? Was there anything in particular at that tournament that you realized you needed to work on for World’s?

I learned how foreigners wrestle and try and sneak wins last minute. It showed me where to get better.

I wrote in a post last month that your freestyle defense to this point has been really good and that you didn’t really need to have great defense in college because you were the one that was always on the attack. Have you always been this good at defending your opponents’ shots, or was this something you knew you needed to work on in order to be the best in the World?

My defense had already been great. That’s what made me so confident in my offense is that I knew no one can score on me. You may get there but you won’t finish.

Are you interested in getting into coaching down the road?

Yes. I want to coach at Iowa.

On to the real important things, you just got married, how has that been so far?

It’s been awesome. Honeymoon was great and our house is starting to come together little by little making it our home.

What does your wife think about having her husband on a World Team and the success you have had to this point?

She doesn’t treat me any different. To her I am just a normal everyday person and I love that. She keeps me in line and gives me great reminders.

Talk about why you started the Go Fund Me page, and how your family is important to you. How has their presence had an impact on your wrestling?

I started the page so that my family can make it down to see me win a World Gold medal. They have been there from the beginning and have always supported me. This is the biggest challenge and competition I have ever been in and it would be devastating if they could not see it first-hand. The trip is very expensive and anything that helps relieve the cost is greatly appreciated.

Over the last four or five years Ramos has certainly given Hawkeye fans someone they could count on. When Iowa was at Carver, you knew Tony was going to win. When Iowa looked to end the year without a NCAA champion, Tony came through. I think for once it would be nice for fans to return the favor. Let’s give our support to Tony!

(EDIT) Also, I forgot to mention that if you would like to purchase some Tony Ramos gear, or want to follow along with what Tony is up to, check out his website TeamRamos.co!

3 thoughts on “Talking with Tony Ramos”