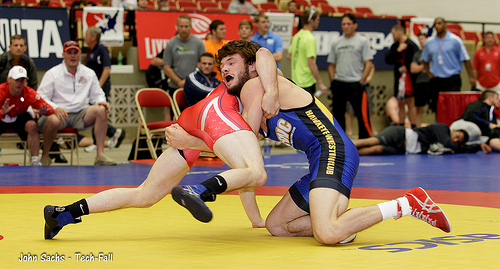 The first video comes from former Iowa State assistant coach (now at Northern Colorado) Troy Nickerson talking about the strength of the Junior World Team. Nickerson believes that because almost everyone on this USA team has some experience on the international level – be it a past Junior World Team, or competing at the Cadet World level – it has a really good chance to walk away with a lot of hardware. Being a lightweight guy himself, he was asked to dig into those guys, and Nickerson feels that with Gilman should have a good chance in wrestling in the gold medal match next weekend in Croatia.

The next interview was with Thomas Gilman himself, who is rocking a pretty “gnarly” beard, or as he describes it his savage/barbarian look. Gilman talks a little bit about his match against Nathan Tomasello, whom he had to beat to claim the spot on the Junior Team back in May. Since the camp is out at Ohio State, Gilman has had a chance to work with his “rival”. I say “rival” because while they are Big Ten foes, Tomasello is also preparing Gilman to make sure he is ready for the World level.

When asked what he needs to do to win a World Title Gilman responds with, “Just got to move my feet, move my hands, and keep attacking.” He goes on to talk about last years World’s where he lost a match he felt that he had won in the quarterfinals, and he doesn’t want to leave the match in the refs hands. He also keeps the plan for who is going to 125 and who is going to 133 for Iowa, a secret by saying (and I’m paraphrasing), “We’ll see, I am shrunk down right now, but I might grow, we’ll see.” He also shows a lot of respect for Clark when discussing how the starting spot was given (or however you want to phrase it) to Clark at the end of the season.

Pretty much a classy interview by Gilman, and Iowa fans should be happy that they have him as a Hawkeye. I would suggest you watch it in it’s entirety as there are a couple other little nuggets in the interview, and it’s less than 6 minutes in length.

Junior World’s will take place in Zagreb, Croatia, starting on Tuesday August 5th, going through Sunday the 10th. Men’s freestyle doesn’t start until the weekend, so the schedule looks like:

The final note also comes out of Ohio as Alex Marinelli (St. Paris Graham, OH) announced that he will be attending the University of Ohio State (Intermat). Marinelli was said to be between the Hawkeyes and the Buckeyes for his college commitment, but chose to stay closer to home. Marinelli is only a junior, so he would have been in the 2016 recruiting class.