Watch your future Hawkeys at Fargo 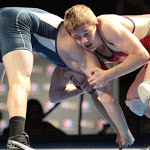 If you don’t frequent Team USA Wrestling’s YouTube channel you have been missing out. Last week, some of the country’s finest wrestlers all traveled to Fargo, North Dakota to take part in the High School National tournament, and USA Wrestling got the matches posted to watch (for free). The Iowa Hawkeyes had recruits competing in both Greco-Roman and freestyle and came out of the tournament with quite a few All-American honors. I thought maybe this would be a good time to check out the future of Iowa Hawkeye wrestling, before they take the mat in the Black and Gold.

How about we start out with one of Iowa’s champions (in Greco-Roman) Burke Paddock. Paddock was able to take home dual All-American honors, by placing third – in freestyle – in this match against South Dakota’s Brett Bye (insert clever joke about wrestler’s name). Bye is nationally ranked so Paddocks tech fall for third was pretty impressive take a look below. I realize the video is 30 minutes long, but fast forward to the last two minutes to see the match.

Paddock also pinned Bye in Greco. It’s plain to see that Paddock could be a really good wrestler. With a Greco background, he won’t be afraid to go upper body against his college opponents. I look forward to seeing what Paddock can do when he gets to Iowa. Hear some of his thoughts below, he talks about Iowa starting in the one minute mark.

Looks like we could have a suitor for Nick Moore after he graduates, as Paddock states, he is shooting for 165.

Next up is a video of heavyweight recruit Sam Stoll, who in the Greco-Roman final he faced off against UNI recruit Adarios Jones. Stoll didn’t compete in freestyle, but given his Greco success you may be able to draw a conclusion to another heavyweight young Greco star who is having Division I success right now (or at least hope something similar happens) Adam Coon. Stoll is a great recruit get, and I can’t wait for him to roll around with Telford and coach Berhow.

This matchup features two Hawkeyes who squared off at 138, Seth Gross and Logan Ryan. Both of these two wrestlers will be challengers for the future of 141 and watching this match was a good taste of what the future has in store for us. Something I took away was that Ryan is relentless. He really relies on wearing out his opponent and is going to keep on attacking. Not to say Gross isn’t similar, but the main takeaway I saw in this match was Gross having really good defense.

Another all Iowa recruit matchup has heading to Iowa Mitch Bowman against recent commit Cash Wilcke at 182.

It’s easy to say this every year, but this really does look like a great recruiting class for 2014. Most of these recruits will have a great opportunity to be four year starters in an Iowa lineup, which is not an easy task to accomplish. While Fargo success doesn’t guarantee college success, it usually is a good indicator. If nothing else you should watch these matches and see that these wrestlers are what Iowa fans are hungry for. Hard nosed, relentlessly attacking, scoring machines. You can see it in the way Ryan is constantly on the attack, you can hear it in the words Paddock speaks moments after winning a Greco title, and you can even read Gross making those comments in an article we did earlier this summer. This has the making of a very good class.

5 thoughts on “Watch your future Hawkeys at Fargo”