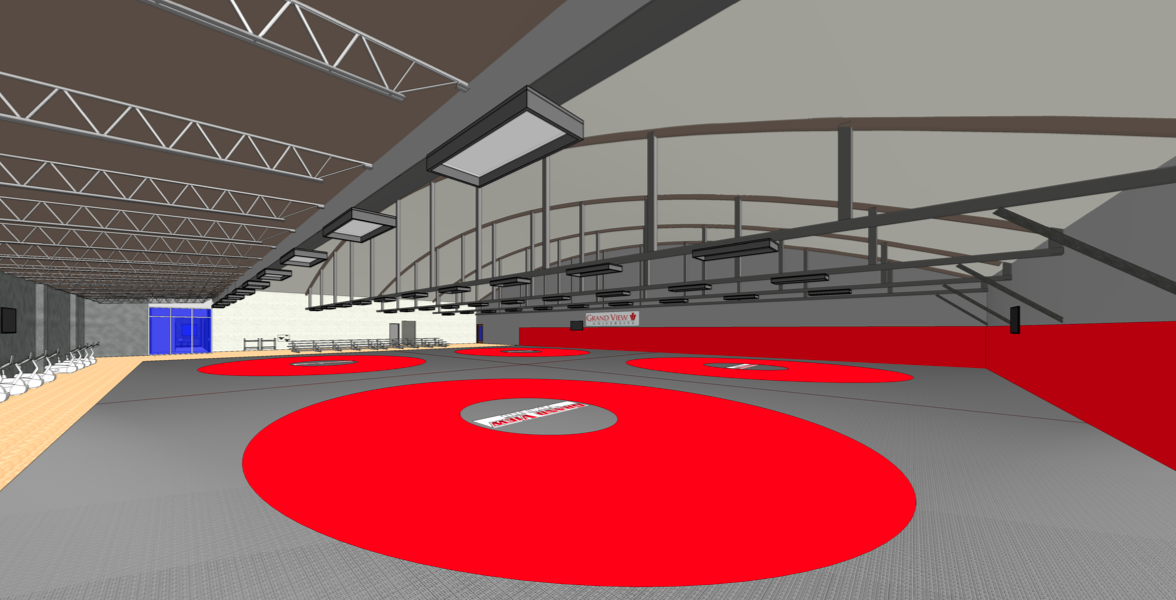 The current practice room of the three-time returning NAIA National Champions is the size of most 1A high school wrestling rooms. According to the Grand View online roster they have 56 man roster wrestling in a room the size of one full mat. It is time for an upgrade don’t you say??? This facility will have four full mats which from my knowledge is the largest college facility in the nation. The plans below are

Coach Nick Mitchell came to Grand View in 2008 and hasn’t looked back since his hire. What Coach Mitchell and his staff have accomplished since then is something coaches dream about when starting a new program.

I was able to sit down with Coach Mitchell for a little Q&A about the facilities and Grand View University Wrestling.

Q: What’s changed the most about your job since arriving on campus?

“There have been a lot of great since I started at Grand View. The campus itself has changed a ton. We have had a lot of growth in student population with the addition of athletic programs. There are new residence halls and lots of upgrades in facilities. We’re also building a new student center right now that will include a skywalk that goes over 14th st. The best thing I’ve noticed though is the overall increase in pride people have in being part of Grand View University. It’s fun to be part of so many great changes.”

Q: You’re very active on social media, especially Twitter and Instagram. What’s the benefit for you and the program of interacting with fans on a personal level like that?

“There are a lot of reasons why we’re active on our social media. The biggest is that wrestling doesn’t always get the press we’d like so it’s a great way for our fans to know what is going on with our program. It also really gives people a glimpse inside what our program is all about. If potential recruits or parents of recruits want to know what GV Wrestling is built around they can go on our Facebook or Twitter or go on YouTube and learn a ton about us.”

Q: Grand View will have arguably the best wrestling facility in the country. Does this move set you guys up for moving to Division II in the future?

“I don’t think so really. I really like competing in the NAIA and it’s a good niche for Grand View. I think sometimes people think moving from NAIA to NCAA Division II is a step up, but I think it would be more of a step over. Wrestling is wrestling. Last year we shut out the team who finished 3rd in the nation in Division II.  Next year it could be the opposite. We don’t get too wrapped up in the whole D1, NAIA, DII, DIII thing. It’s about preparing the same no matter what singlet that other guy is wearing.”

Q: This has to be a huge selling point to those transfers now. But how did you do it with minimal facilities in your first couple years?

“This new facility is going to open up a lot of options for training for us that we didn’t have with a smaller room. It will also be key in keeping us healthy with the additional space. But when it comes down to it, you don’t win a title because of facilities. We have done well in the past because I have a great coaching staff, number one. Our head assistant, Paul Reedy works as hard as any other coach in the nation. We have 9-10 other part-time coaches that love the sport and helping guys reach their goals. The other part is we’ve been able to create a culture here where our guys expect a lot out of themselves. We try to set the bar as high as possible understanding that when you do that, you have to put in a ton of work. We are a small program, but we try to do things on a big scale.”

Q: #1 in NAIA, #1 in facilities, #1 in academics next? With the report on Florida basketball players receiving special treatment how important are academics to the wrestling team and when will you be #1 in academics??

“That’s the goal! In the last three years not only have we won the national title, but we’ve been 4th, 4th, and 5th in the nation in academics. That’s something I am really proud of and I love to brag about. You don’t see that very often in any sport. But, the goal is to win everything, so we have some work to do.”

“If they are people involved in the wrestling community I’d love to hear from them. Ever since we’ve started the program here I have heard from so many people that are just excited to have college wrestling back in Des Moines. We don’t have a large alumni base yet being such a young program so support on this project has to come from the wrestling community. We have been lucky to have some key people step up so far, but we still have some work to do. They can also contact our VP for Advancement Bill Burma.”

Q: What needs to happen for a GVU and ISU re-match??

“If they invite us back we’ll wrestle them again. I have a lot of respect for Coach Jackson and Travis and Trent Paulson. Those guys all have a ton of wrestling knowledge. Wrestling ISU at Hilton was a lot of fun last year.”

I was also able to get some comments from Bill Burma, the Vice President for Advancement at Grand View University.

Q: Could you tell us a little more about the building and when you plan to have it ready?

“Grand View purchased the AMF bowling alley in December, 2013. We began the remodel of 1/3 of the building, which was 15,000 square feet this spring taking out 20 bowling lanes for the project. We plan to keep around 15 lanes for the men’s and women’s bowling team and for student use. The remaining 1/3 of the building use has yet to be determined. The plans are to have the facilities open in September.”

Q: How can gifts be made for the project?

6 thoughts on “A look into Grand View’s New Facilities”