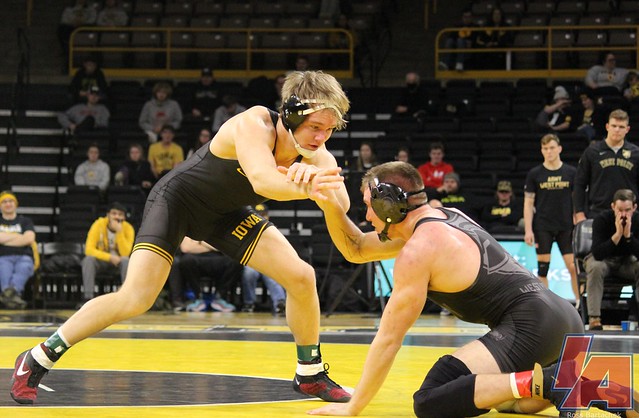 The Collegiate Wrestling Duals hosted by Journeymen Wrestling are upon us and the top ranked Iowa Hawkeyes have traveled down to Niceville, Florida where they will compete in three duals over two days starting Monday (December 20th) and ending with their final dual on Tuesday (December 21st). The Hawkeyes are in a pool opposite of the likes of Penn State and Northern Iowa (which I specifically mention to plug Nic’s UNI Preview).

Iowa’s first dual will be against Central Michigan at 6:00 PM CT on Monday followed immediately by their dual with #21 Lehigh, which is scheduled for a 8:00 PM CT start time. Iowa’s pool also includes #5 NC State and #10 Missouri, one of those two being likely Iowa’s Sunday opponent. The entire event will be streamed on the Collegiate Duals’s Rokfin page and fans who already have a Rokfin subscription need to purchase a one-time PPV of the event to stream all of the action.

Iowa opens as a big favorite in their dual against Central Michigan and comfortable favorites for their second dual against Lehigh. The big caveat is that once again, Iowa is expected to be at less than full strength though this event should put the team one step closer to that point.

Starting with the most obvious, for the first time this season the team listed Spencer Lee in the dual probables and it seems likely that we will see the return of the three-time NCAA champion at 125 pounds. Even with the return of Lee to the probables, from a fan perspective its still best to stay in conservative mode with expectations. It’s extremely possible given the caution that Lee only wrestles one match this weekend, and looking at the known competition, you would probably want to see him match up with #11 Lane to see him face a quality opponent. NC State has #5 Jacob Camacho and Mizzou has #15 Noah Surtain looking ahead to the possible third dual opponent.

The big positive is Jacob Warner being the sole wrestler listed at 197 pounds, which gives the feeling that the All-American is ready to resume his starting role full-time. Neither CMU or Lehigh feature a ranked opponent, but Tuesday’s has the potential for Iowa to see either #4 Rocky Elam (Mizzou) or #15 Isaac Trumble (NC State), both will be a tough match.

After making his season debut against Iowa State, Max Murin delivered a key win in the rivalry dual and once again finds himself in the probables. The Hawks also listed Cobe Siebrecht at 149, so it’s possible that a split duty situation happens at this weight. Regardless on the day one outcomes, Iowa is likely to need Murin for the third and final dual to be in a position to win as a team.

The final note on missing starters is at 174, where Iowa did not list Michael Kemerer as their starter. After hints that the 2021 NCAA finalist could return to the lineup back in mid-November, its a bit of a bummer to see him not listed in the plans for this week’s duals. That upbeat is that Nelson Brands is more than capable as a backup and he should be in a position to go 2-0 to kick off the event, though the potential competition for Mizzou and NC State will pose a really tough test for Brands.

Throughout the rest of the lineup there are a few noteworthy matches to watch for, but Kaleb Young and Tony Cassioppi are the only two wrestlers that have a shot at facing two ranked opponents on the first day. Young will have #19 Lovett followed by #10 Humphreys at 157, while Cassioppi will take on a pair of top ten wrestlers and former All-Americans #9 Stencel and #8 Wood. Both of these wrestlers will be fighting for who has the toughest weekend with all of their projected opponents being ranked.

Outside of that, potentially the biggest match on the first day for Iowa will be in the first dual when Jaydin Eierman faces #7 ranked Dresden Simon it’s the highest ranked opponent for any Hawkeye. That match probably has the biggest juice for Iowa fans outside of the return of Lee. We will go further in depth on Iowa’s final opponent once we know the results from day one of the competition.