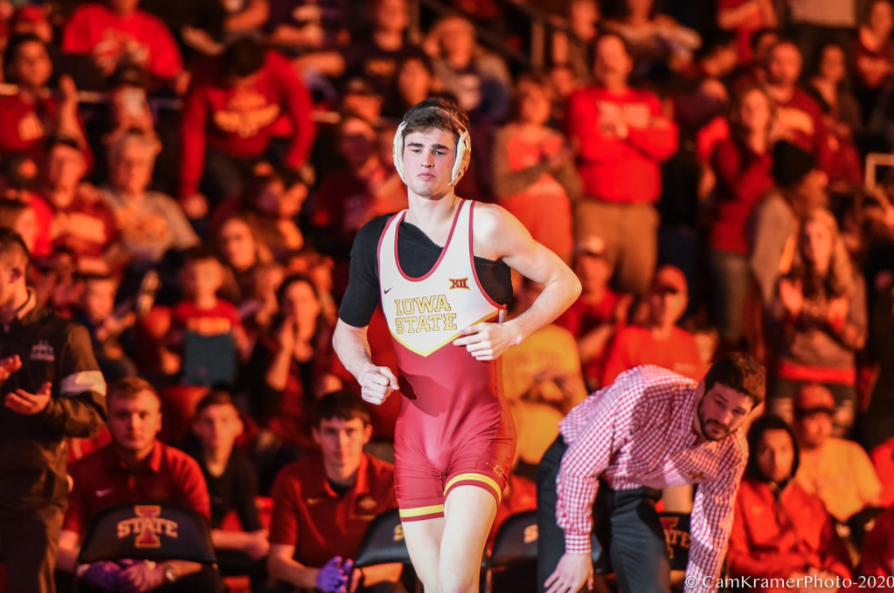 Iowa State brought home a share of the Big 12 dual crown despite not having Austin Gomez (all year), Jarrett Degen (Two months), and David Carr (last month of the season). Austin will be looking to receive a medical hardship year after suffering another concussion just prior to the Harold Nichols Cyclone Open. Degen’s less than 100% but is a warrior ready for battle as always. Carr, as we all know, is an absolute gamer…he’ll be ready to go in Tulsa.

After the Cyclone’s loss to Oklahoma State coach Kevin Dresser offered up some ultimatums to his squad, and they answered the call. The only dual loss after that was to Missouri when many starters weren’t present.

125:  Alex Mackall  (NWCA 14/ RPI 10)
Mackall enters the postseason with a 16-6 record on the year. Alex has got quality wins this year in the Big 12 including, Jay Schwarm, Alex Thomsen, and Christian Moody. With four allocations for the Big 12 at 125 pounds, I don’t see Alex not securing a spot in Nationals. His only Big 12 losses have been to Piccininni and Schwarm this season.

133: Todd Small (NWCA 16/ RPI 19)
To think Small can’t win the Big 12 title is outlandish. A lot will depend on his health after injury defaulting out of his match with Cam Sykora in the Cyclones last dual of the year. His only conference losses on the year are Wittcraft, Madrigal, and Sykora. Wittcraft and Madrigal were by a combined three points. The Big 12 has eight allocations at 133 pounds so unless injury plays a part Small will be wrestling in Minneapolis. He very well could earn an at large bid if unable to go.

141: Ian Parker (NWCA  9/ RPI 7)
Parker is the stalwart of the Iowa State lineup. All he does is win, may not be the illustrious pins and tech falls, but he gets the job done. Demas (Oklahoma) has had his number this year, but Ian has closed the gap. Ian lost by tech fall in December at the CKLV but suffered a 3-1 loss in the dual at Oklahoma. The Big 12 has five allocations at 141 pounds so Parker is undoubtedly in. Even with something unforeseen he’d get an at large bid.

149: Jarrett Degen (NWCA 13/ RPI 7)
Jarrett is a gamer. Sure he gives up the first takedown…generally, but his length and scramble ability negate all that. Degen’s been battling a shoulder injury since December, but still manages to persevere when it matters most. I mean his shoulder slipped out warming up for his match against Max Thomsen (UNI) and still managed to take it into sudden victory losing 3-1. Degen is definitely finishing top five (Big 12 allocation) unless his shoulder dictates otherwise.

165: Chase Straw (NWCA NR/ RPI 30)
Chase is one of those guys that you just sense will be there at the end. Who could forget his run to a Big 12 title at 157 pounds last year? 165 pounds is not a very tough weight, plain and simple. I believe Straw will finish top four at Big 12’s and guarantee his spot at Nationals. If he doesn’t Cyclone nation will have to keep their fingers crossed to see Chase at U.S. Bank Stadium.

174: Samuel Colbray (NWCA 11/ RPI NR)
I’ll be the first to admit Colbray dropping down to 174 pounds was a bit of a mystery. The early going wasn’t kind to Colbray, especially at the Sundevil Duals.  After his loss to Joe Smith (Oklahoma State), Kevin Dresser basically called out Colbray on his weight management. Colbray answered the call taking out Bryce Steiiert (UNI) in Hilton by a score of 7-6.

184: Marcus Coleman (NWCA 28/ RPI 20)
Marcus has been on the cusp of something big for two years now. Going up ten pounds (midseason) has seen it’s challenges. To think Coleman can’t finish top five at Big 12’s is ludacris. His only conference losses at 184 pounds are to Zach Carlson (SDSU), Anthony Montalvo (OSU), and Taylor Lujan (UNI).

197: Joel Shapiro (NWCA 30/ RPI NR)
Joel will need a top seven finish at the Big 12’s if he hopes to wrestle at Nationals. His redshirt freshman season has been…turbulent He’s had some solid wins, but to take the guesswork out of the hands of the “powers that be” Shapiro guarantees a spot finishing top seven this weekend.

285: Gannon Gremmel (NWCA 12/ RPI 10)
Gremmel gets the job done. He will be looking to avenge losses to Tate Orndorff (Utah Valley) this weekend in Tulsa. Big 12 has seven allocations at 285 pounds so Gremmel is definitely in; the question is how far will he go Minneapolis?

In summation, the Cyclones could see all ten at U.S. Bank Stadium or seven…it’s postseason anything can happen. Rankings and records go out the window. One thing is for certain, big dogs eat and pups go home.