Iowa State Heads to Missouri for Final Road Dual of 2020 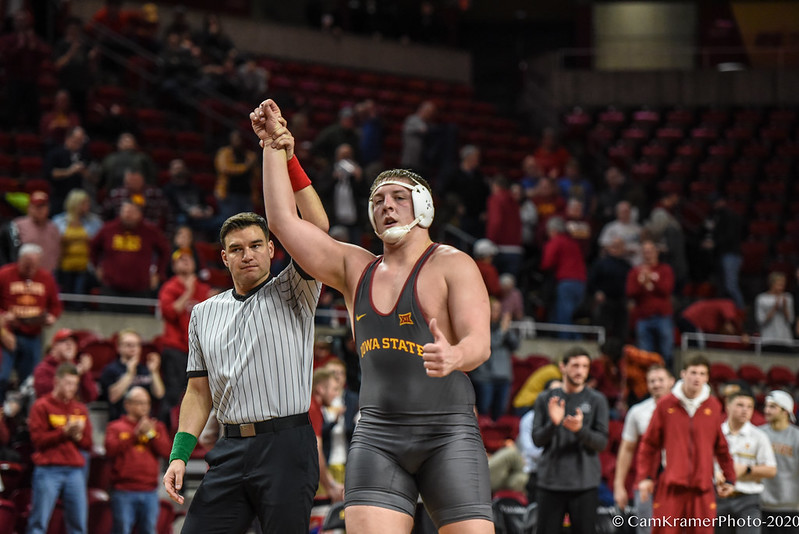 (Note: You can get access to our articles earlier by subscribing to our Rokfin channel)

Iowa State will be heading south on Saturday for the first of two duals this weekend. The Cyclones will look to keep the momentum rolling after picking up a big win last weekend over in-state rivals UNI. That will be no easy task for the Cyclones as they will face off against a very scrappy Missouri Tigers team. The Tigers are coming off of a victory over SIU-E where they clinched their eighth straight MAC regular season title.

Starting off at 125 pounds, #14 Alex Mackall will have Cameron Valvidiez. Mackall will look to rebound from last weekend where he gave up a first period fall. Last year, the match was an 8-5 decision in Mackall’s favor, but Mackall has looked a lot sharper this year, so don’t be surprised if he picks up bonus points.

The next two matches should favor Iowa State pretty heavily. At 133 pounds #16 Todd Small with take on Cevion Sevarado, and at 141 pounds #7 Ian Parker will face Alex Butler. Small and Parker are both coming off of ranked wins in the UNI dual and will look to keep that momentum going. These are both matches where the Cyclones will look to pick up some bonus points to blow the dual wide open.

In the marquee match of the dual, #11 Jarrett Degen will face a familiar foe, #5 Brock Mauller. These two split four matches last year at two matches apiece. Both of these guys are very comfortable in scramble situations and are both capable of putting points up on the board in a hurry. Last year’s match scores were 12-6, 7-4, 11-4, and 10-7 so expect another high scoring affair from the All-Americans. After missing a lot of action in the second half of the season, this match will be crucial for Degen and seeding at the NCAA tournament.

The big question at 157 pounds is whether or not #3 David Carr will be wrestling. If not, Grant Stotts will get the nod against Phyllip DeLoach. Stotts and DeLoach are 1-1 against each other this season so this will be a toss up match. Carr has a major decision victory over DeLoach during his redshirt season, so expect bonus points from the Junior World Champ if he is able to wrestle.

The 165-pound bout will be another toss up match as Chase Straw will have talented freshman Peyton Mocco. Straw won a Big 12 title last year at 157 pounds, but hasn’t had the same level of success up at 165. Both wrestlers can be stingy defensively, so don’t expect more than a regular decision from either guy.

Last weekend, 174 pounder #14 Sam Colbray picked up his biggest win of the year by knocking off #5 Bryce Steiert. Standing in his path this week will be Connor Flynn. Flynn has put together a solid season at 16-7, but Colbray will be the heavy favorite and should be able to score some bonus points for the Cyclones.

At 184 pounds Marcus Coleman will take on Dylan Wisman in a match that could go either way. Despite his loss to Lujan last weekend, Coleman has looked good since moving up to 184 pounds midseason. Wisman will be a solid test for Coleman as the two are pretty evenly matched.

Joel Shapiro will have a tough test at 197 pounds as he takes on #20 Wyatt Koelling. Though Shapiro is currently unranked, he has spent time in the rankings this season. He may be the underdog on paper but this is definitely a winnable match for the Cyclone. Neither guy is known for lighting up the scoreboard, so expect a low scoring match that could be decided late.

Rounding out the dual will be #13 Gannon Gremmel taking on Jake Bohlken. Gremmel will be a heavy favorite as Bohlken has struggled to stay around .500 this season. The Cyclone heavyweight will try to wear down his opponent with his heavy hands and gritty style. If Gremmel can force his will and break Bohlken, you can expect bonus points for the Cyclones.