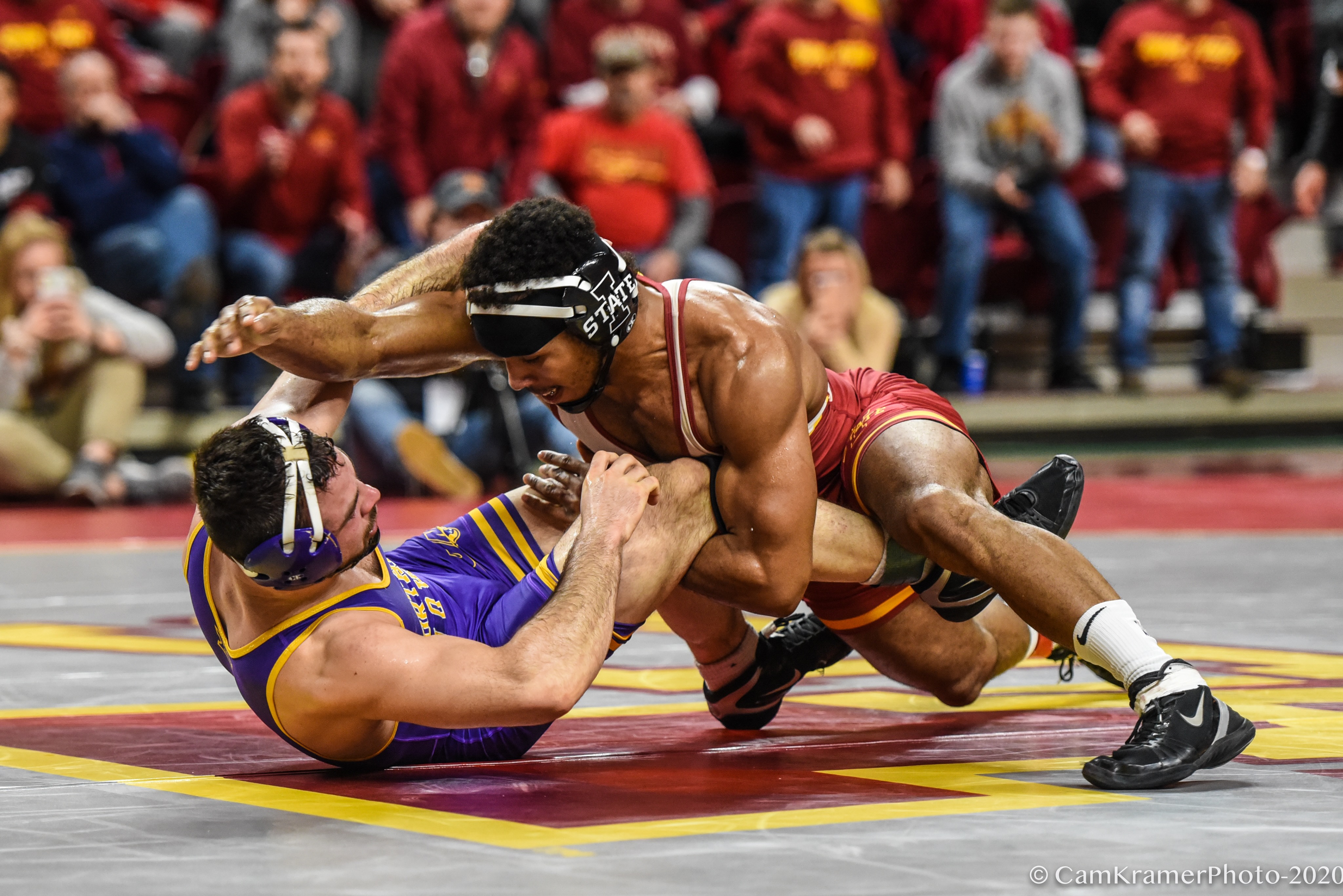 The Iowa State Cyclones took six of ten matches and snapped UNI’s three-dual win streak with a 18-16 win Sunday afternoon. The Cyclones earned a pair of upsets from #16 Sammy Colbray and #14 Gannon Gremmel to power their way to the win.

“We got, in the wrestling world, a little ‘Hilton Magic’ there towards the end there. We got that place loud and it was fun,” ISU head coach Kevin Dresser said. “I tell our guys all the time, you guys are entertainers, and you’ve got to think like an entertainer.”

Gremmel got things loud, closing out the dual against #11 Carter Isley, 4-0. After a scoreless first period Gremmel was able earn a takedown in the second and ride Isley out of that period. Isley took down to start the third and was unable to get up, igniting the crowd for their drive home.

Colbray took down UNI’s #5 Bryce Steiert right off the opening whistle of the match. Steiert fought back with a takedown of his own in the first period, and another in the second to lead 6-4 going to the third period. Following a Colbray escape he was able to connect on a single leg and put Steiert down for the 7-6 upset.

“The moment got big, in a few situations, and you can see it. You’ve got to go back to where you’re good,” UNI head coach Doug Schwab said after the dual. “You’re trained to continue to attack, in situations we didn’t. Things start to get tight, and you start looking at the clock and it’s tight, and you’re like, second guessing yourself.

“We had a few guys, that we had them (ISU) on the ropes, I mean on the ropes and you just gotta, there’s got to be a little bit of a death blow in there, that you put on a guy.

“There was blood in the water and we did not go after it.”

Schwab always wants to start things off with a bang, which is why he is always happy to start at 125 pounds, where his lightweight, Jay Schwarm, can pin anybody, anytime.

Schwarm did just that, taking down #12 Alex Mackall, cradling him, and earning the pinfall in just 2:17.

#13 Max Thomsen and #8 Jarrett Degen wrestled in their 10,000th match of their career (ok, it’s really just their fifth meeting in their college career). The two 149 pounders wrestled to a 1-1 tie at the end of regulation, and Thomsen was able to connect on a takedown in sudden victory to move his record to 5-0 against Degen.

At 157 pounds Paden Moore was able to take advantage of #3 David Carr being out of the lineup, scoring a 5-3 win over Grant Stotts. Moore came from behind in the match, getting a takedown and rideout in the first period to end that 3-1. After another escape in the second, he was able to ride Stotts enough to win the match.

Chase Straw came through for Iowa State in a big way at 165 pounds, taking down Austin Yant in sudden victory for the 3-1 win. The pair had little interest in scoring through regulation, but Straw was able to connect on a single leg and eventually worked over the takedown.

Taylor Lujan earned the UNI’s last victory of the night, a 13-5 major decision win over Marcus Coleman. Coleman came out, much like Colbray before him, ready to scrap with the Panther, but Lujan did Lujan things to work out of Coleman shots, and Lujan was able to overwhlem him in the second and third periods.

Joel Shaprio scored a 6-2 win against UNI’s Isaiah Patton at 197 pounds. Shaprio earned his first takedown in the opening moments of the match, but was unable to get any other offense going until the closing seconds of the third period, after Patton started pressing the action down 3-2. Shaprio was able to throw Patton by and secure the win.

The win for Iowa State is Dresser’s first over UNI since his time in Ames. It’s also the first win for the Cyclones since the Panthers joined the Big 12 Conference. Iowa State needs one more win – next Sunday against North Dakota State – to clinch a share of the Big 12 dual championship.

UNI’s loss drops them to 7-4 overall and 6-2 in the Big 12. They’ll close out their dual schedule this coming Thursday at Wisconsin.