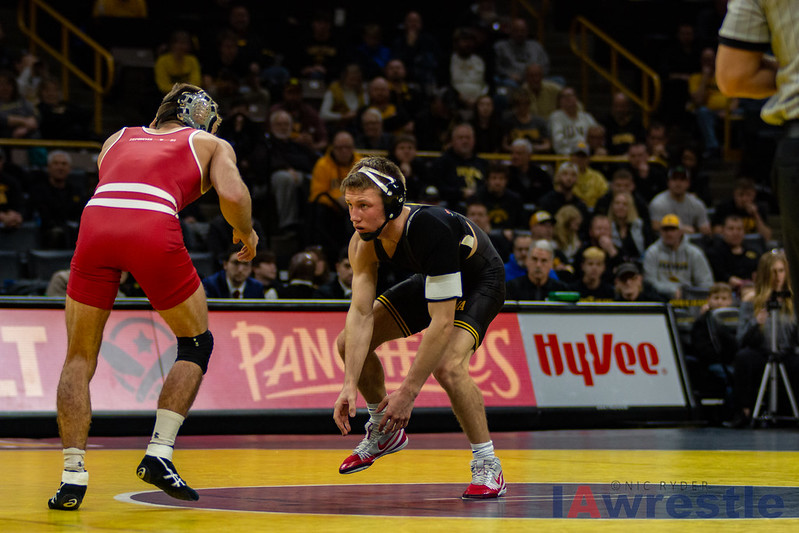 (Note: You can get access to our articles earlier by subscribing to our Rokfin channel)

Iowa vs Oklahoma State is a rivalry that exemplifies what college wrestling is all about. They are the two most storied programs in the sport, and the next chapter of their rivalry takes place this Sunday at Carver-Hawkeye Arena. Last year’s dual was lopsided in the Cowboys favor, so the Hawkeyes have had this dual circled for a long time. A handful of injuries have prevented the Hawkeyes from being at full strength since Midlands, but they should have everyone back in the lineup come Sunday. With a full lineup Iowa is favored in all ten matches, but there are still a few toss up matches that could make this dual interesting.

The dual gets started with arguably the most anticipated match: #1 Spencer Lee vs #4 Nick Piccininni. Spencer leads the series 3-1 but gave up a fall that ignited Gallagher-Iba last year during the dual. Spencer will need to get off to his usual fast start and hold on to that lead, as Piccininni has come on late in their previous matches. Something is different with Spencer this year though; since Senior Nationals, he has outscored opponents 106-3, plus three pins. Piccininni will have his hands full trying to slow down that momentum, but this match will be one that Oklahoma State’s has circled with a chance to win.

At 133 pounds, #3 Austin Desanto will take on Reece Witcraft in just his second match back since injuring his knee in the Penn State dual. Desanto put up 24 points last week against Minnesota and will look to keep his high octane pace against the true freshman Witcraft. Witcraft has a Greco background and will probably look to go big with some throws in an attempt to end the match early. Desanto’s relentless pressure might be too much for Witcraft though, and should result in bonus points for the Hawks.

Another Hawkeye who has been battling injuries is #5 Max Murin. He’ll take on Dusty Hone in a match that he should be heavily favored in. Murin is coming off an overtime victory over #6 Mitch McKee and will look to keep his momentum rolling into the Big Ten’s.

Probably regarded as the second best match of the dual, #2 Pat Lugo will take on #6 Boo Lewallen at 149 pounds. Both wrestlers have spent time at the top of the rankings, and this match will have some big seeding implications come NCAA time. Lugo has been consistent all year but has struggled to get his offense going the second half of the season. Both of these guys are tough to score on, so expect a low scoring decision one way or the other. This is another match Oklahoma State is going to need to win if they want to avoid the shut out.

At 157 pounds, #5 Kaleb Young will take on Wyatt Sheets. Young won by decision last year over Sheets in the dual, and will be the favorite to repeat that result. Young is another guy that has struggled to get his offense going as of late. Sheets is tough defensively, but if Young can get to Sheets’ legs, Young is the better scrambler and will likely come out on top.

Another ranked match up goes down at 165 pounds as #2 Alex Marinelli will take on #6 Travis Wittlake. Wittlake has had an impressive freshman campaign thus far, but has yet to face someone at the caliber of Marinelli. Marinelli has gotten back on track after losing to Joseph at the Penn State dual by winning his last two matches by major and tech-fall. Wittlake may prove too much to bonus, but Marinelli should be able to win comfortably.

The 174-pound bout will feature a matchup between two All-Americans as #1 Michael Kemerer and #13 Joe Smith will wrestle for the third time. Kemerer is 2-0 against Smith, but both of those matches took place at 157 pounds and back in 2017. Kemerer has seemed unstoppable all year and doesn’t seem to be slowing down. Don’t be surprised if Kemerer is able to score bonus points against the former All-American.

Assuming all goes to plan, #9 Abe Assad will be back in the lineup at 184 pounds for the first time since dropping consecutive matches against Penn State and Michigan State. In last week’s press conference Tom Brands referenced the return of his true freshman for this dual. Assad will be looking to get back on track against another freshman, #14 Anthony Montalvo. The two have yet to wrestle in their young careers, and a win would be big for both of their resumes come time for NCAA seeding.

In another matchup between a pair of All-Americans, #6 Jacob Warner will take on #16 Dakota Geer at 197 pounds. Warner has looked good as of late, earning a major last weekend, and will look to keep rolling against Geer. Geer was an All-American at 184 last year and has had some struggles since moving up to 197. Warner is the superior wrestler on their feet, but Geer will likely try to use his top game to his advantage. If Warner can get away without any troubles, it should be a comfortable victory for the Hawkeye.

In the last match of the night #3 Tony Cassioppi will have either Austin Harris or Cornelius Putnam. Both have wrestled multiple duals for the Cowboys, but neither have had much success. This will be a perfect match for Cassioppi to get some momentum back after dropping two straight matches to #1 and #2 heavyweights in the nation. Cassioppi is going to be looking for the fall to finish up the dual on a high note and send the Hawkeye faithful home happy.