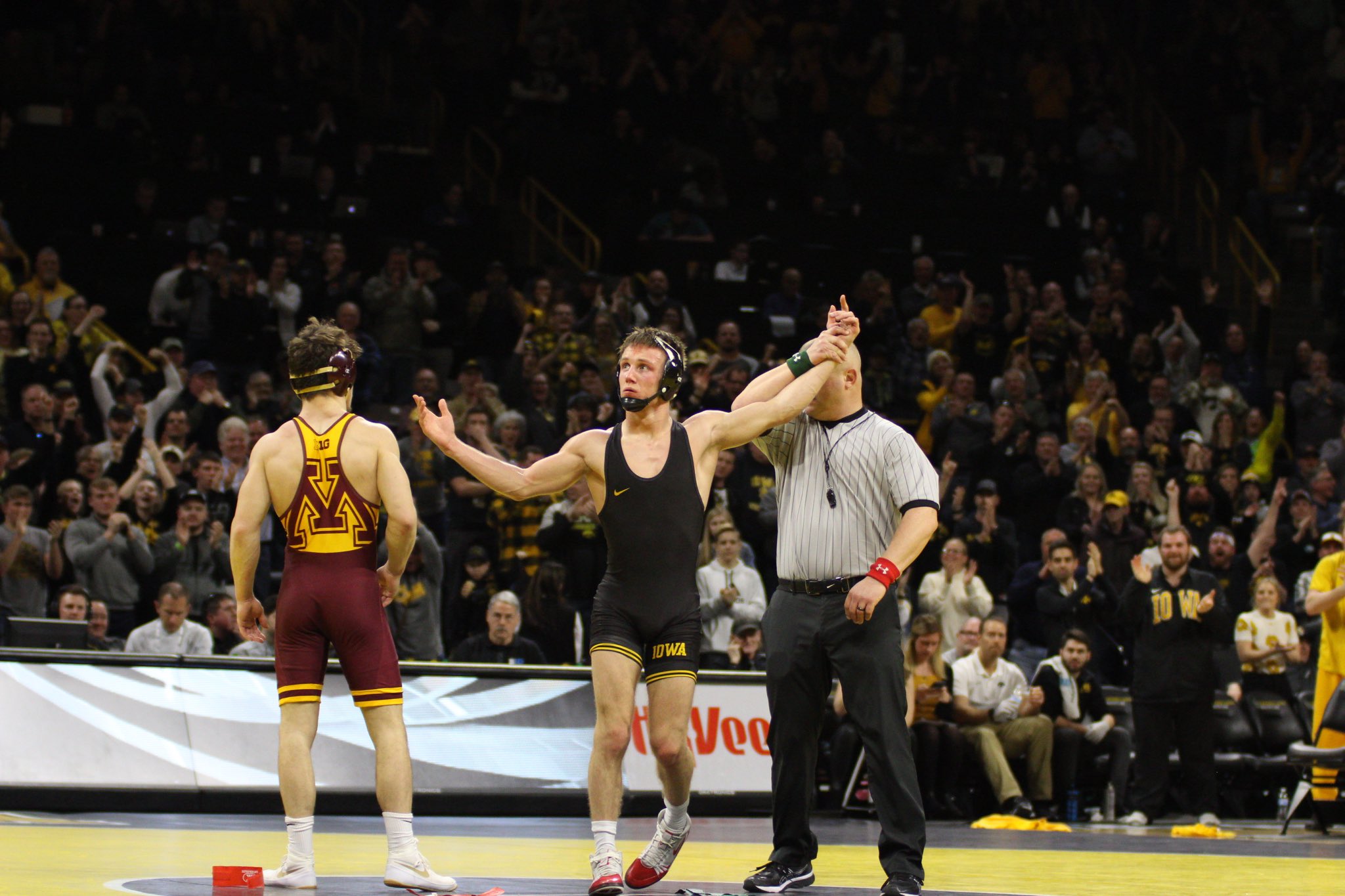 The Iowa Hawkeyes clinched the Big Ten regular season dual title outright with their 35-6 victory over the #18 ranked Minnesota Gophers inside Carver-Hawkeye Arena in front of 12,608 fans. The Hawkeyes took eight of ten matches from the Gophers, including three marquee wins where both wrestlers entered as top ten ranked wrestlers.

The dual kicked off at 184 pounds where senior Cash Wilcke was tapped once again for starting duties over true freshman Abe Assad. After a scoreless first two minutes, the Gopher wrestler was able to strike for a go behind takedown, but he was able to get one back with an escape and then tie it early in the second with another escape after selecting the bottom position to begin the period.

Webster got an escape to go back out front in the third period, and Wilcke secured a body lock looking for a toss, but the two rolled through to their knees and eventually out of bounds. After an onslaught of attacks from Wilcke he was unable to pick up a score and fell 3-2.

At 197 Jacob Warner managed to get his team on the board after he defeated Hunter Ritter. Similar to the first bout of the evening, Warner’s score came off of getting around his opponent and using a mat return to score the takedown. Warner put on a tough ride, but Ritter got an escape after 1:24 underneath. Warner was able to add one more takedown with short time after the two traded shots, and Warner was able to go behind.

Warner added a takedown in the second, and early reversal in the third to make it 8-3, which is when the sophomore looked to move into bonus. After intentionally releasing Ritter twice, Warner tacked two more takedowns on to close with the final score, 13-4.

That set up the biggest head-to-head meeting of the evening, the meeting between #3 Tony Cassioppi and #1 Gable Steveson. There was plenty of action in the first period, Steveson picked up two takedowns, but Cassioppi managed two escapes and received a third point on a penalty by Steveson. After an escape in the second period the match was back to all tied at four points.

In the final period Steveson got an escape, and a double leg to go up 7-4, Cassioppi was able to get an escape for an opportunity to tie the match, but the Gopher held on to win by the 7-5 score.

The Gophers opted not to wrestle their #13 ranked Pat McKee against Spencer Lee, so the two-time NCAA champion accepted a forfeit and the free six points.

DeSanto pushed his lead in the second with an escape, a stalling point against Dryden and two takedowns. He finished the match with a third period takedown followed by four nearfall points to put the match away with a technical fall.

Also returning to the lineup was sophomore Max Murin at 141 pounds, who had been absent from the lineup following the Nebraska dual in mid-January. He matched up with Gopher All-American Mitch McKee, who struck first in the match with a takedown, which was followed by a Murin escape. In the second McKee got an escape to go up 3-1, but Murin was able to add a takedown of his own to tie it at 3-3. McKee got out to end the period up 4-3.

Murin then got an escape of his own to begin the third period to tie the match at four points each. The Hawkeye was on another scoring opportunity at the end of regulation but after the officials looked the match headed to sudden victory. After a front headlock/head pinch situation by McKee was ruled potentially dangerous they headed back to the center of the mat for a restart and the Hawkeye drove through on a double leg to secure the big win.

In the dual’s third bout with two top ten wrestlers meeting it was #2 Pat Lugo who came out with an early strike for a takedown against #7 Bryaton Lee. The Gopher wrestler was able to score back-to-back scores off of escapes, and Lugo got an escape in the third to win the battle, 3-2.

After giving up the first score in the match to Ryan Thomas, Kaleb Young battled back with two escapes and a second period takedown at 157 pounds. Escapes from Thomas kept the match knotted at 4-4 early in the third period, and Young looked to be inches away from scoring but 4-4 is the way regulation ended. Young got in deep on the leg in sudden victory but was once again unable to convert.

In the first set of ride outs Young picked up a stall warning but was able to keep Thomas down for the entire period. With the clock against him, Thomas released Young, but was unable to score.

At 165 pounds Alex Marinelli came out looking to match DeSanto’s first period pace against Kasper McIntosh. Like his lightweight counterpart he racked up six first period takedowns. He was able to put the match away in the second period with an escape and takedown to McIntosh’s back for a six point move. Marinelli then did a cut and release, followed by a takedown to finish off the 21-6 technical fall.

Closing things out was the dual’s fourth and final match between top ten opponents with #1 Michael Kemerer taking on #8 Devin Skatzka.  After scoring two takedowns in the first period, Kemerer locked up a cradle for his third takedown, but he more importantly secured the fall to put Skatzka away.

Up next, Iowa will close out their regular season schedule next weekend when rival Oklahoma State visits Iowa City on Sunday. It will be another night dual that will be televised on the Big Ten Network.