Hawkeyes Cap Off Perfect Season with Win Over Oklahoma State 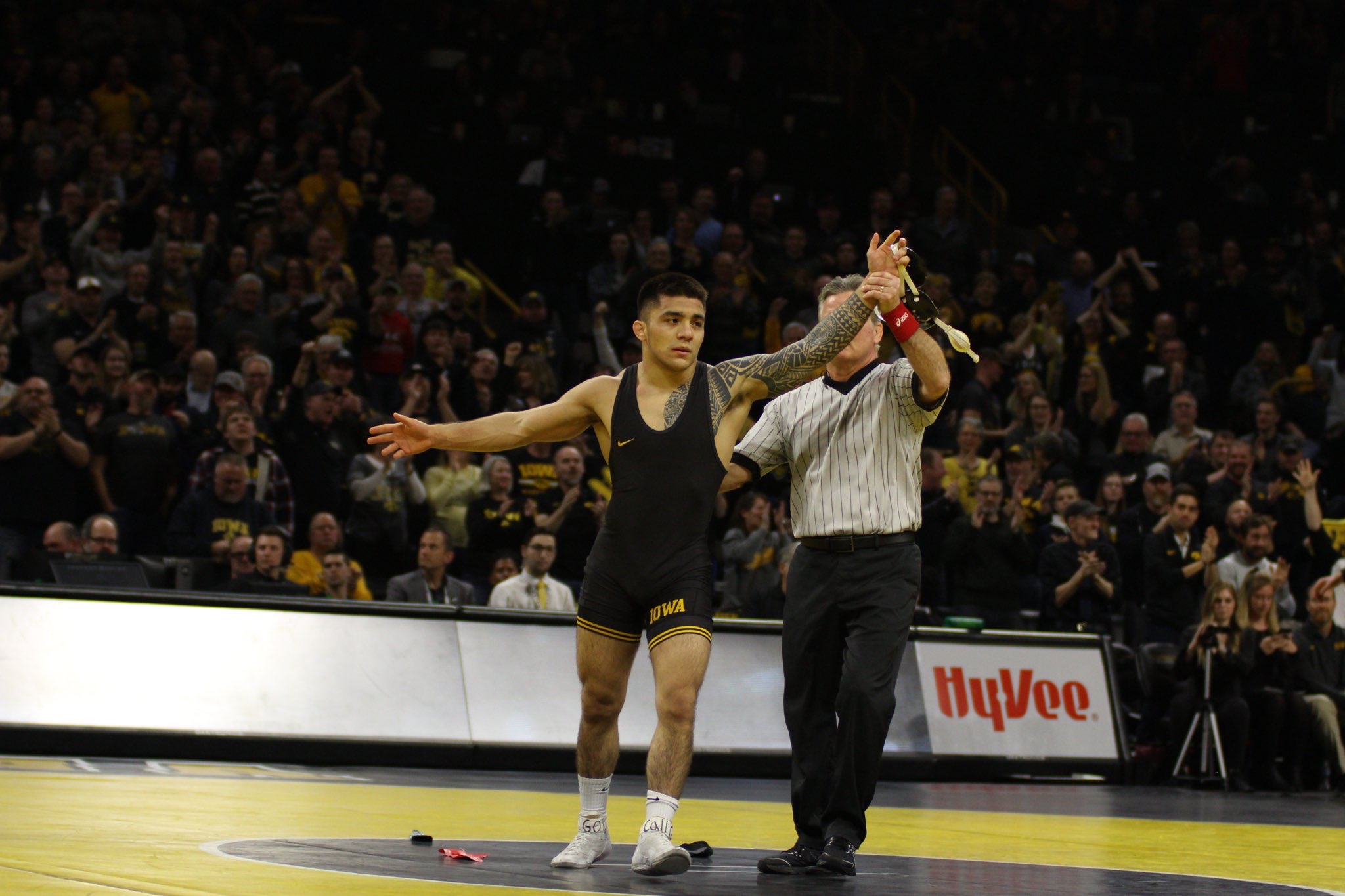 The Iowa Hawkeyes capped off a perfect season moving to 13-0 on the year after a 34-6 win over the #10 ranked Oklahoma State Cowboys. Over 13,000 fans jammed into Carver for the senior day dual and were rewarded with plenty of action. The 13,000 fans also gave the Hawkeyes an average of 12,568 fans per dual, which is a single-season NCAA record. The news all but assures the Hawkeyes to extend their streak of leading the nation in attendance.

The dual kicked off with fireworks at 125 pounds where two-time NCAA champion Spencer Lee faced off with Nick Piccininni. The Cowboy wrestler got the better of Lee at last year’s dual. Lee was able to return the favor with his 12-3 win to open the dual. After dropping in on a single Lee cut across to a double leg finish for the first score. He was then able to flip Piiccininni over for four nearfall to take a 6-0 lead after a rideout.

Lee picked up two more nearfall points in the second period after Piccininni chose down and the Cowboy wrestler was able to get an escape after being ridden for over four minutes. In the third Lee scored off a stalling point against Piccininni, and later added two escapes, the latter after a Piccininni takedown.

After not being able to get to his traditional offense in the first minute and a half of the match, Austin DeSanto got on the board with a bang as it looked like Reece Witcraft was going to try and do a lateral drop on the edge of the mat, but instead, the Cowboy wrestler wound up on his back for six points. DeSanto continued to look to take Witcraft to his back from neutral and added another score off a go behind. In his third attempt, DeSanto was able to put Witcraft away for the first period fall.

The Hawkeye action continued into the 141-pound bout with Max Murin scoring a takedown within 12 seconds of the first whistle against Dust Hone. Murin scored a pair of takedowns in the first and second periods and took Hone to his back in the third with a standing cradle for a six point move.

In the second marquee match between #2 Pat Lugo and #6 Boo Lewallen ended with a Hawkeye exclamation point, as Lugo picked up a fall in the first period. The senior starter caps off his three year Hawkeye career with a 9-4 record inside Carver-Hawkeye Arena.

Wrapping up the first half of the dual was a meeting between Kaleb Young and Wyatt Sheets at 157 pounds where the Cowboys managed to get on the board with an upset. Young picked up the opening score with a takedown, but Sheets got out quick to cut the score to 2-1. An early reversal in the second period gave the Cowboy wrestler the lead. In the third Young chose neutral as the starting position, and gave up a takedown though he nabbed a reversal. After cutting Sheets Young managed to get in on another shot but gave up another takedown to fall to the upset.

In the night’s final top ten match pit #2 Alex Marinelli against #6 Travis Wittlake the Hawkeyes were able to sweep all of the main battles coming into the dual. It was a tight scoring affair with neither guy scoring through the first six minutes of the dual other than escapes. In the last period Marinelli finally able started to fight through Wittake’s hands on his second attempt he managed to hang on to an ankle long enough to use it for a score. Wittlake managed to get out, but the damage was already done.

At 174 pounds we had a battle of former All-Americans with Michael Kemerer defeating Joe Smith 12-2. The Hawkeye timed his first two shots perfectly earning takedowns in the first and second periods. In the third, Kemerer scored his third takedown by blocking off Smith’s shot, and he added a fourth shortly thereafter for the bonus win.

Receiving the call at 184 pounds was freshman Nelson Brands taking on Anthony Montalvo. Brands was the starter for the Hawkeyes in the team’s opening dual against Tennesee-Chattanooga up through the Midlands. In the first period, Brands fired off several shots but was unable to finish. Toward the end of the first Brands was looking headlock, but gave a takedown with short time remaining.

The Cowboy wrestler extended his lead in the second period with an escape and takedown. Brands got on the board in the third with an escape, but Montalvo picked up another takedown.

In the evening’s final ranked meeting it was Jacob Warner who came out on top of Dakota Geer by decision. The match was 2-2 late in the second period when Warner went ahead with a takedown to make it 4-2. In the final period, Warner got an escape, and quick takedown to go up 7-2. With over a minute left Warner cut Geer to push for the major decision, but was unable to add to his lead.

Closing the dual out was a dominating performance from Hawkeye freshman Tony Cassioppi, who defeated Austin Harris by the final score 11-1. Cassioppi scored on three takedowns, and a third period reversal with two stall warning penalties and riding time

Up next for the Hawkeyes will be a week off from competition as they prepare for the Big Ten Championships, hosted at Rutgers in New Jersey.