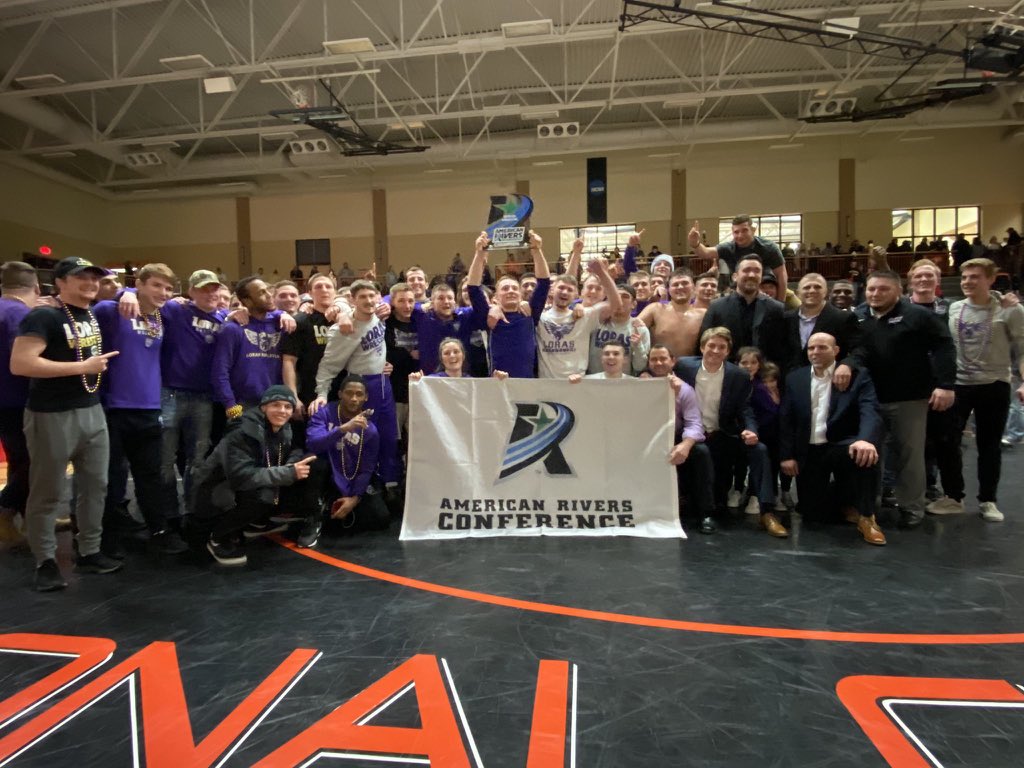 The Duhawk victory snapped Wartburg’s run of 27-consecutive conference titles that dated back to 1994 and also handed the Knights their first loss ever at Levick Arena. Head Coach TJ Miller, who wrestled for Wartburg and was coached by his father, put a high emphasis on the importance of what the win means for Loras College.

“It means a lot to Loras College. I told my team that at some point the streak has to be ended, so why not us” said Miller. “My father started the streak a long time ago. It’s been tough to break. I feel relieved, it means so much to not just our guys, but our alumni, boosters, faculty, staff and administration. It’s awesome”.

The A-R-C championship started on a sour note for the Duhawks, who trailed 7-0 heading into a battle of top grapplers at 141-pounds. Senior and two-time All-American No. 6/4 Clint Lembeck put the Duhawks on the board by defeating No. 4/6 Brady Fritz in a tightly contested match. Facing a 2-0 deficit in the third period, Lembeck used a series of near-fall to complete the third-period comeback with a 5-4 victory at 141-pounds. Continuing the momentum for the Duhawks was Daniel Ruiz who scored a thrilling overtime victory over former National Champion Brock Rathbun at 149-lbs. Locked at two points each after three periods, Ruiz claimed the deciding takedown midway through the overtime period to come away with the 4-2 decision.

Senior All-American No. 4/2 Brandon Murray silenced the Knight crowd by recording a third-period fall over Shea Hartzler at 157-lbs. Murray used a plethora of points to build an early lead over Hartzler before pinning his opponent in the third. The fall put the Duhawks in the lead 12-7, yet Wartburg closed the gap by securing a victory at 165-pounds. After suffering a first-period takedown, returning All-American No. 5/5 Jacob Krakow battled back to claim an 8-2 decision over Warthburg’s Paul Calo. The win for Krakow put the team score to 15-10 for the Duhawks.

Following a setback at 184 lbs., senior and the No.1 ranked 197-lbs. wrestler in the country Guy Patron Jr. kept his undefeated senior campaign intact by cruising to a major decision over No. 3/4 Kobe Woods at 197-lbs. A Wartburg decision at heavyweight closed the gap but it was too little too late for the Knights, who’s 27-year reign over the conference was put to an end courtesy of the Duhawks by a score of 19-17.

After locking up their first conference title in program history, the Duhawks will take two weeks off before kicking off the postseason at the NCAA Lower Midwest Regional. Wrestling will begin from the Five Flags Center in Dubuque, Iowa on Saturday, Feb. 29 at 1 PM.