Iowa Wrestling Community is Second to None 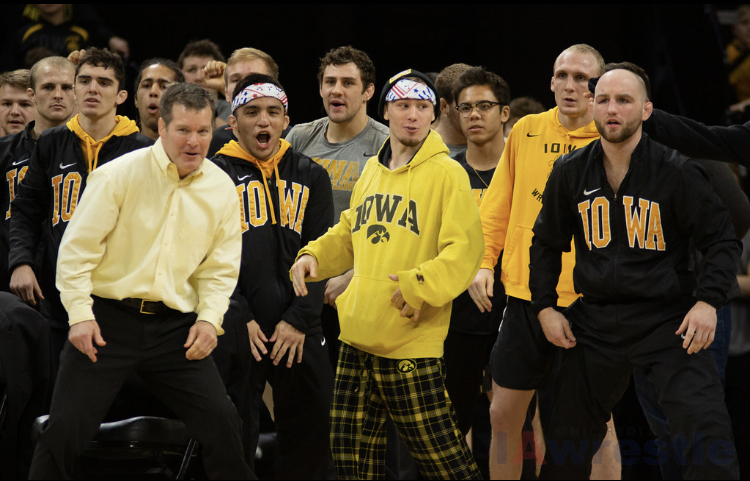 The state of Iowa loves its wrestling. It makes no difference, youth level, high school, or college, men or women. There comes a sense of pride in our wrestling. We strive to be the toughest, well-conditioned, hard-nosed grapplers, on the mat. The scene last Friday night in Carver-Hawkeye Arena exemplified that very pride, and the crowd appreciated every second of it.

The environment at CHA was absolutely mind-boggling. Fourteen thousand, or thereabouts, came together as one. The entire crowd was a part of the Iowa Hawkeye wrestling team on this night when they exacted their revenge at home that’s been seven years in the making.

The dual with Penn State was sold out well before it actually took place, and every soul in the arena was treated to some of the highest level college wrestling in the country. The part I paid particular attention to was the Hawkeye bench throughout. It was hard not to, being right next to them. The passion, not only for their own wrestling but also for teammates is incredible. To see Alex Marinelli return to the arena floor within minutes after a tough loss speaks volumes on his character. No sulking, no feeling sorry for himself, his team was in a dogfight and he was out there cheering till the end. Further proof that wrestling is a team sport.

Raucous crowds and great wrestling occur all over Iowa. In fact, we were just treated to some at the McLeod Center in Cedar Falls not long ago. A party twenty-nine years in the making went down after UNI upset Oklahoma State. Over four thousand adrenaline juiced Panther fans erupted as Carter Isley sealed the deal. When you talk to UNI coaches, wrestlers, and fans you’ll hear the word family mentioned just as much as wrestling.

I take away a couple of things from every event I attend, whether it is a particular match, or performance, or something else that just sticks out to me. For this particular dual, it was watching the entire coaching staff and wrestlers give a long time UNI wrestling supporter a hug one-by-one in their appreciation. You see this special lady has fallen ill with cancer, and Doug Schwab with the rest of his guys right behind, made a beeline to this woman immediately after the horn blew. The Iowa wrestling community rallies for those in need. This hit home with me after losing my mom to cancer, and why it is my biggest and brightest recollection from the dual. Good on you, UNI Panthers!

The second-ever IWCOA Girls State Tournament was held a little over a week ago and what a show those girls put on!

Participation quadrupled from eighty-two to three hundred seventy-eight, and the fanbase is thriving. While Waverly Shell-Rock has been gracious enough to host this event the past two years if numbers continue to climb, the tournament will outgrow the venue. That fact alone is a resounding call on the IGHSAU to sanction this great sport for girls and get involved. This year saw two-time state champions, numerous first-time champions who just started wrestling, and Sydney Park has a shot at being Iowa’s first girls four-timer.

Lastly, Iowa will congregate in Wells Fargo Arena in a few short weeks for the 2020 Iowa High School Dual and Individual State tournaments. This will always be one of my favorites to be a part of. Upsets will shock us, and the pure emotion of it sets it apart from anything else. Winning brings jubilation, losing breeds raw emotion that makes many vow to be back next year and win it all. Something or somethings unexpected always happens at “The Well” in February which adds to the allure that draws massive crowds. Loyal fanbases and great wrestling are the staples. So intriguing to see what storylines will come from the state tournament. One absolute certainty is there won’t be a shortage of them, second Saturday night’s crowd is unlike any other!

The Iowa wrestling community is second to none…