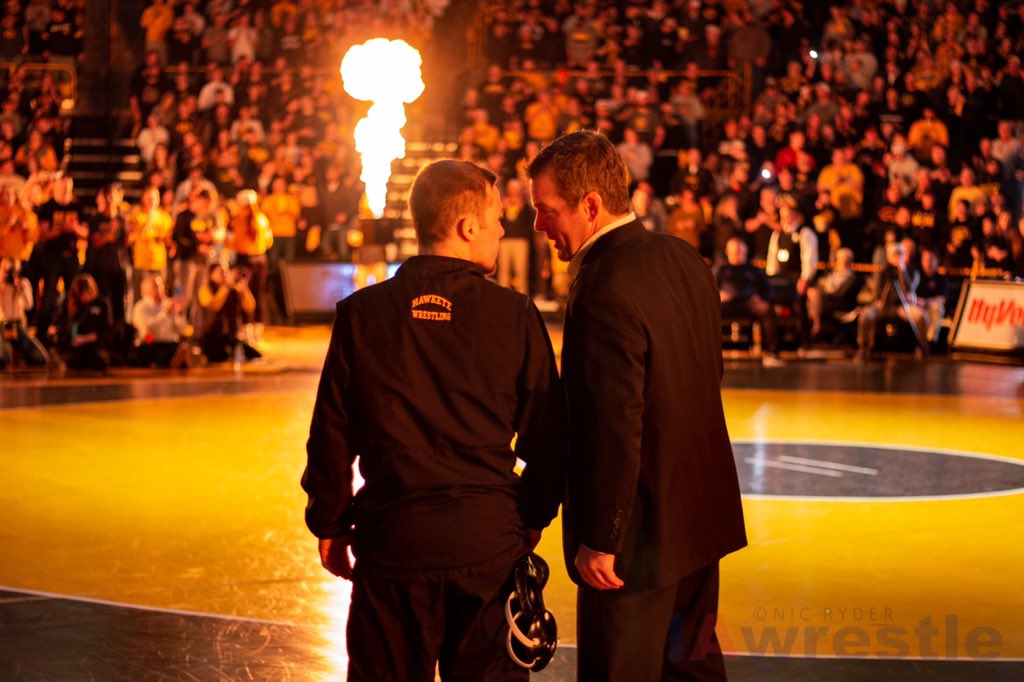 The Iowa Hawkeyes have emerged from their tough home stretch tested, but unscathed. After hosting three straight top ten dual teams, two of which were in the top five. Through the three dual stretch, Iowa outscored their competition 69-33, with the closest dual being last night’s 19-17 performance against the Penn State Nittany Lions in front of a sold out arena.

It was a wild night for the Hawks taking on Penn State. The team won six of the nine bouts contested, with All-American Austin DeSanto forced to injury default in his match against Roman Bravo-Young. The dual also saw some incredible battles in the upper-weights, including a 11-6 win for Michael Kemerer, who upset #1 ranked Mark Hall.

In speaking with Tom Brands after the dual the head Hawkeye said the moment produced one of, if not the loudest cheers he’s experienced as an athlete or coach.

Brands also mentioned that his team would enjoy the win against a tough opponent, but they are also on to the next thing which is Michigan State. This Spartan squad comes into the dual with two ranked wrestlers and they are coming off a loss to Illinois on Friday night.

The first ranked match is featured at 157 pounds where Kaleb Young will face #15 Jake Tucker. The two have never met head-to-head. Last year at the Big Ten Championships when the duo would have faced one another Tucker did not compete and medically forfeited his match.

The other big match is at 184 pounds where Abe Assad will look to try and rebound following his first loss as a starter. After going 4-0 in a varsity singlet Assad dropped a 7-3 decision to Penn State’s Aaron Brooks. Up next for the Hawkeye freshman will be the #15 ranked Cameron Caffey.

Another match of note will be the 165-pound bout between Alex Marinelli and Drew Hughes. The two have never met in college, but they do have a history dating back to high school. Back in 2015, the two faced off in our first ever Night of Conflict event where Marinelli emerged a winner by major decision 17-6. Since arriving on the college scene Hughes has spent most of his career at 174 pounds but made the decision to drop to 165 this season.

It sounds as though the team will be without DeSanto as the team continues to evaluate the junior following his injury default. Brands mentioned that fifth year senior Paul Glynn would be ready to go to step into the lineup and man the 133-pound spot. Glynn was the team’s starter at this weight back in 2018 and does have a history with his probably opponent Garrett Pepple. At the 2018 Big Ten Championships Pepple defeated Glynn 3-1.