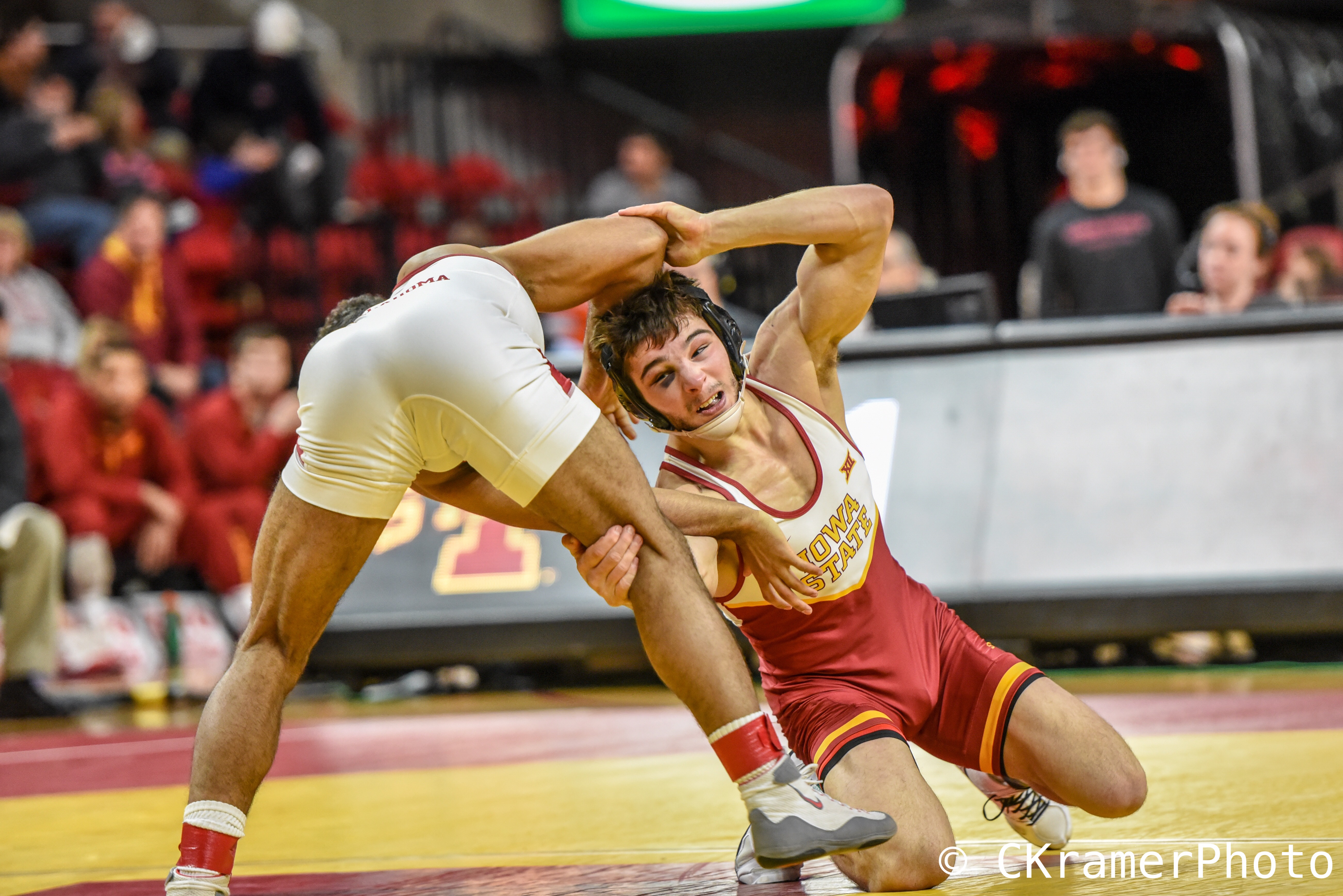 The Cyclones come into Friday nights contest reeling a bit after winning three of ten bouts against, Oklahoma State. This prompted, Kevin Dresser, to make some changes in his team’s approach to the “lifestyle” needed for the body to be ready to wrestle. Here is what Dresser had to say on Tuesday, forty-eight hours later:

Expectations for Iowa State have been higher this year than in the past, after sending nine guys to Nationals a year ago. Injuries, and the aforementioned lifestyle issues, have put a damper on those a bit, but there’s still time. After implementing more weigh-ins for Iowa State, I believe we will see a much-improved performance later on in matches. On paper, this appears to be a dual where Iowa State can get back on track. Of the three ranked matchups (141/157/285), the Cyclones are favored in two, with Josh Hokit ranked two spots higher than Gremmel at heavyweight.

#12, Alex Mackall will be looking to rebound after a suffering a loss against Oklahoma State’s #4 ranked, Nick Piccininni. Mackall, 13-5 on the year, will be looking to open up his offense out West. He’s looked fantastic at times this year, specifically on top. I expect to see the importance coach Dresser talked about on Sunday, come Friday night in Fresno from Alex.

Ian Parker is simply a workhorse in all facets of wrestling. So much so that Kevin Dresser had this to say after the Oklahoma State dual, “He’s the one guy that really, really gets it. He’s a guy that you teach him how to do something, and then he can do it. I’m just talking about lifestyle, toughness, and commitment, and all that kind of stuff.” #6 Parker hasn’t lost a match since early December at the CKLV. Ian will face, #16 DJ Lloren in the first top twenty clash.

As reported yesterday, we could see the return of All American, #7 Jarrett Degen in Fresno. Degen hasn’t wrestled, competitively, since the quarterfinals of the CKLV in early December. It will be Degen’s call to make whether or not he goes Friday night depending on how he feels. Cyclone fans will go threw the roof if Jarrett toes the line. Iowa State will also bring three-time Iowa state champ, Ryan Leisure into Bulldog territory. Leisure fought tough to keep his match with, #1 Lewallen, at a major decision on Sunday.

Earlier this year redshirt freshman, #3 David Carr hinted to the fact that 157 pounds is a bit of a tough cut. It has shown in his last couple of matches. Carr’s third period versus Kaleb Young in November is different than Carr’s third period in the Cyclone’s last couple of duals. Dresser’s comment post Oklahoma State, “He’s one minute away shape-wise of making a really good run this year, but he’s got to get one more minute in him. He worked really hard for the major and do what he needed to do for the team in a dual meet situation, so that was a great effort on David’s part.” David Carr is World level talent, i.e. reigning Junior World Champion. Will he be ready come March…undoubtedly. Carr’s comments on Sunday were, “I’m about doing whatever it takes. I don’t like seeing my team lose so if we have to do high school…I don’t care what we have to do. I’m about winning.” He will face, #12 Jacob Wright in the second, ranked matchup. He’s already beaten Wright 9-0 this season at the CKLV.

Now at 165 is, Chase Straw. Sunday Kevin Dresser had this challenge for Straw, “I just don’t know how important…really, really important it is to him. I think if it really, really was he could contend. I told him all last year what he was capable of, and he was. He believed me and bought in, and I hope he buys in a little bigger this year.” We will see Friday night in Fresno if Chase has made the deposit. After starting the year with a Cyclone Open title, inconsistency has plagued his performance. Look for Straw to begin to “Right the Ship” against, Ricky Padilla.

#12 Sam Colbray decided to cut down to 174 over Christmas break, and of course, it’s proven to be a challenge. I’ve seen the explosive offense Sam possesses, from just several feet away, when he feels good. He wrestled, the then #12 ranked Joe Smith, to a three point match without taking a 100% committed shot. I predict a wide open offense from Colbray versus Fresno State’s, Jackson Hemauer.

Marcus Coleman made the jump up to 184 pounds after Christmas break, due to Colbray cutting down. Going up or down weight in the middle of the season is difficult at any level. A big win against, Hunter Cruz Friday would be huge for Marcus going forward.

197 for Iowa State is still up for grabs, with two freshmen vying for the spot. Francis Duggan came out and got the first takedown against #11 Dakota Geer on Sunday, but it was tough sledding after that. Duggan did manage to fight off the tech fall. It looks to be, Joel Shapiro in the lineup versus Fresno State. Joel has had the ups and downs that most freshmen endure, especially at such a heavy weight. He will look to get to even his record with a win versus, Isaiah Perez.

#14 Gannon Gremmel has been getting pointers from, Willie Miklus on how to wrestle, Josh Hokit. Hokit, a two-sport athlete for Fresno State, and a returning All American. Here is Gremmel had to say Tuesday afternoon on this weekend’s match…