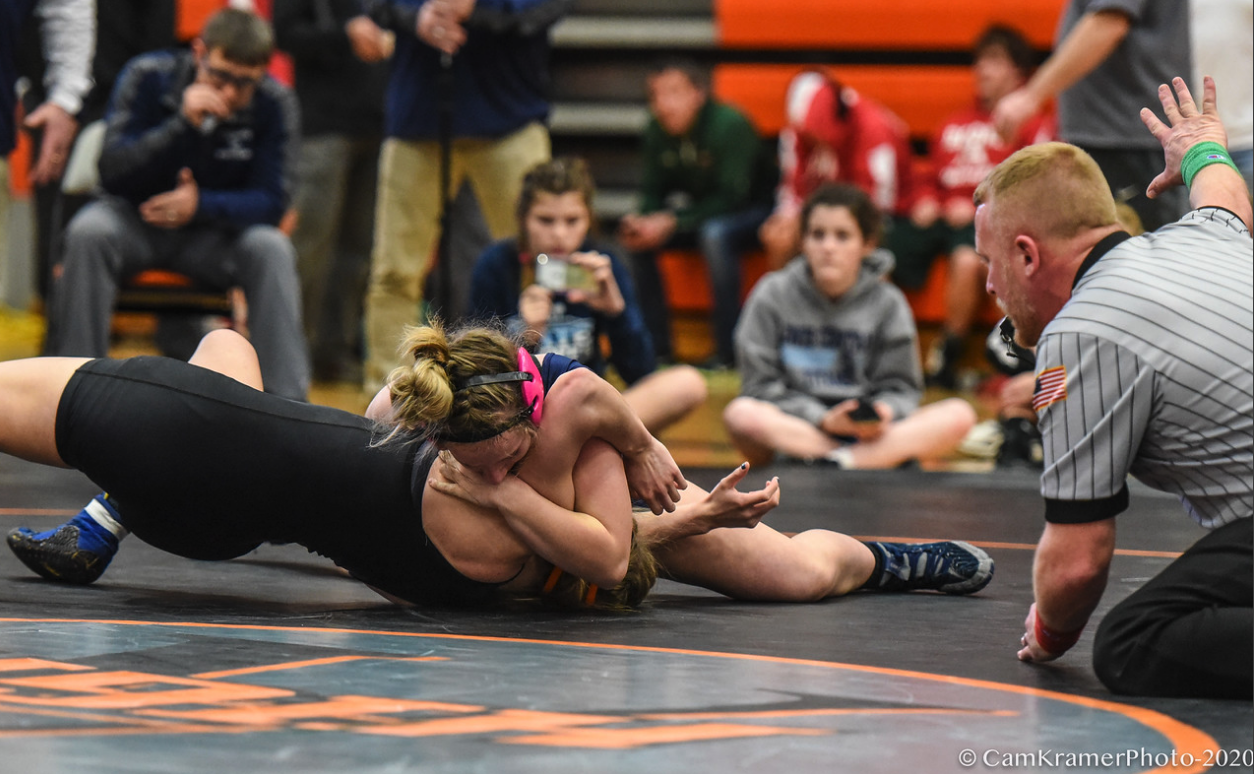 As evident in the total number of girls of last year’s tournament, and this year’s tournament, the push for “sanctioned” girls wrestling in Iowa cannot be ignored much longer. In 2019, 87 girls wrestled in Waverly for the inaugural event, 112 were registered, but the weather kept some from attending. That number has ballooned to 380 this year! It got so large, that it’s now a two-day tournament with wrestling starting this Friday at 5 pm, and starting back up at 8:30 am Saturday morning. A new weight, 145 pounds, has been added this year to give us a total of eleven IWCOA state champions to look forward to.

In this article, we will feature one girl, per bracket to keep an eye this weekend…and maybe a couple of others who could make a splash.

Senior, Ali Gerbracht (AGWSR) comes in as the reigning state champion at 106 pounds. It did not come easy in last year’s finals match against Ella Schmit (Bettendorf). Gerbracht came out on top by a score of, 4-1. Ali also has 110 wins in her high school career versus boys; only the second to accomplish this feat, the other being, Felicity Taylor. It wouldn’t be far fetched at all to see a rematch between No. 1 Gerbracht and No. 2 Schmit come Saturday.

Senior, and top-ranked, Tateum Park (Davenport North) comes into this weekend as the girl to watch at 113 pounds. She beat Meridian Snitker (Waukon) in last year’s final at 113, 8-1. Snitker is up at 120 pounds this year, but No. 2 Kari German (Starmont) and No. 3 Rylee Rodish (Waukee) will try to spoil Park’s plans of being a back to back IWCOA state champion. Tateum has big wins over, No. 1 Ali Gerbracht at the War at West Gym, and No. 1 Chloe Clemons at last year’s AAU state.

Keep an eye on, Indian Hills commit and top-ranked, Chloe Clemons (Pleasant Valley) this weekend. She’s the returning IWCOA champion at 120, as well as an Iowa/USA freestyle champion. The aforementioned, Snitker, and Ashlynn Miller (North Cedar) (No. 8 at 126 pounds) will look to take the title from Clemons this year.

This year 126-pound bracket is stacked, but No. 1 Sydney Park (Davenport Central) will look to earn her second straight IWCOA state championship. Sydney pinned her way threw last year’s tournament in a total time of 5:14. No. 2 Emma Grimm (Osage), and returning 138-pound state champion, No. 3 Avery Meier (Waverly-Shell Rock) stands in her way.

Annika Behrends (Waverly Shell-Rock) won in a barn burner in last year’s state finals over Olivia Diggins (Logan-Magnolia), 10-9.     However, she enters this weekend at the No. 2 spot in the rankings behind, No. 1 Abby McIntyre (Glenwood). Abby was not in attendance a year ago. To further complicate things No. 3 Alexis Ross (Fort Dodge) pinned Avery Meier earlier this season.

Last year’s runner up at 132 pounds has bumped up to 138 this year; she’s also No. 1 in the rankings, Olivia Diggins. The girl to keep your eye on this weekend will be freshman, No. 3 Jannell Avila (Lisbon). Jannell won titles at AAU, and USA state as an eighth-grader. If the last name rings a bell, it’s for good reason. She’s the younger sister of 1A state champ, Robert Avila Jr..

This is a new weight this year. There are three returning placers from last year in the bracket. No. 6 Makayla Mostek (Osage) was third at 138, No. 1 Brittany Shover (Denver) was sixth at 152, and No. 5 Allie Cross was fourth at. 152 pounds. Plenty of ranked girls in this bracket to see who becomes the first 145-pound IWCOA champion?

No. 3 Toyia Griffin (Nashua-Plainfield) is the returning IWCOA state champion at this weight. Griffin earned a tech fall, and two pins en route to her title. It’s Maddy Buffum (Missouri Valley) who comes in as the top-ranked wrestler at 152 pounds though. Buffum finished in second at 138 in 2019.

No. 1 Jacenta Sargisson (LeMars) will be aiming to be a two-time IWCOA state champion this Saturday. She’s the only returning place finisher. No. 2 at 152, Morgan Griffin (Sioux Central), will look to be a worthy adversary. Also, don’t lose track of No. 4, Leah Grimm (Osage), when things get going Friday evening.

In 2019 this weight only had four competitors. This year it’s quadrupled to sixteen. No. 1 Millie Peach (Iowa Valley) returns to defend her crown against all of IAwrestle’s top ten ranked girls. You read that correctly, they’re all registered.

Last year’s runner up, and top-ranked, Iliana Yanes (Riverside, Oakland), would be the early favorite in this weight class. ’19 champion, Rilee Slycord graduated, leaving the door open this year for a new state champ to be awarded. This eight girl bracket will feature all ranked wrestlers. No. 1,2,3,4,6,7,8, and 9 are registered for this year’s IWCOA girls state tournament.