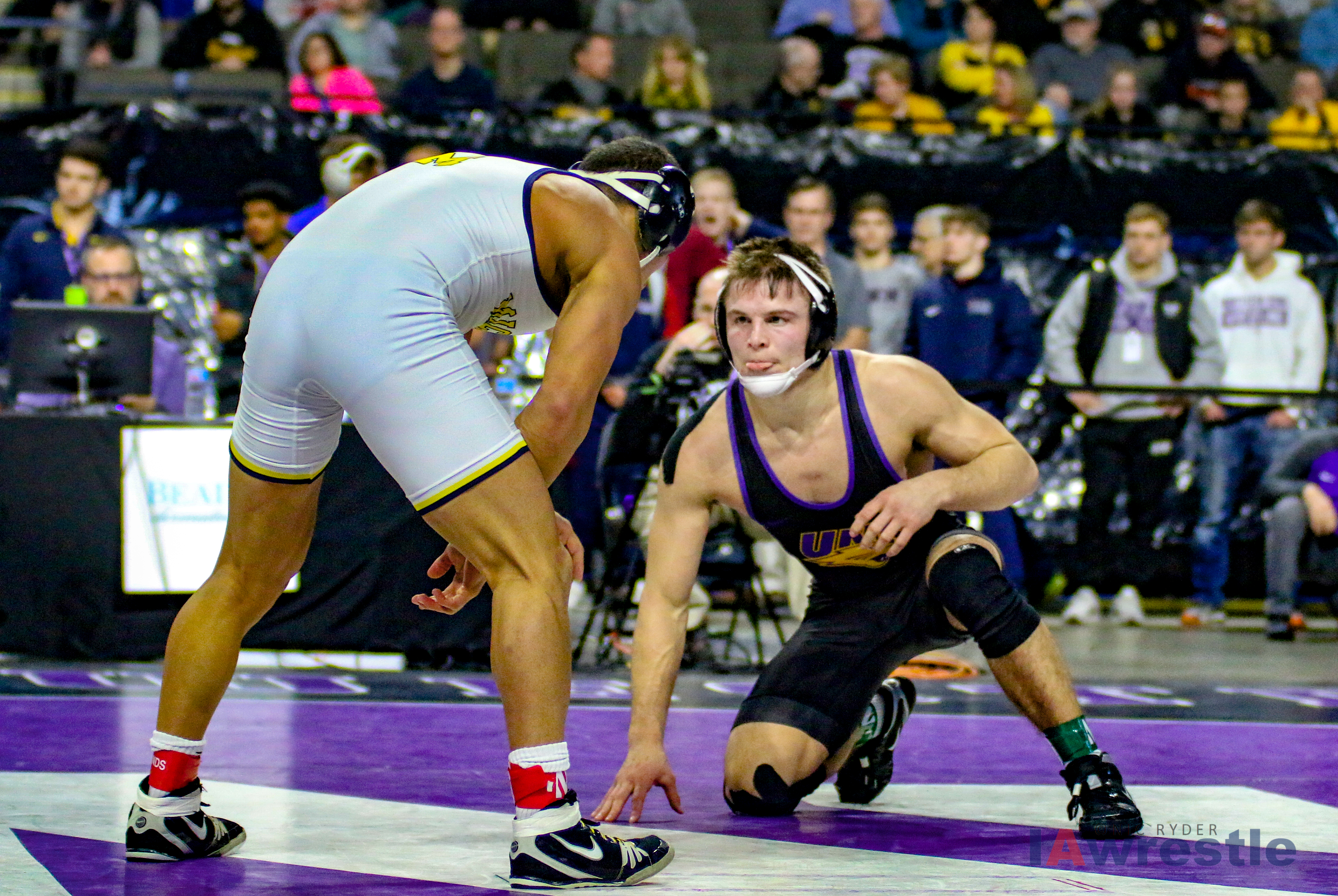 The University of Northern Iowa takes on South Dakota State tonight in dual in the West Gym. The Jackrabbits bring in a squad that’s won 4 duals on the year and is 1-0 in the Big 12.

There are two things to watch for in the dual with SDSU, the first is whether or not Hengry Pohlmeyer takes the mat against Max Thomsen. Pohlmeyer is 2-0 over Thomsen with his first coming in the UNI-SDSU dual meet last year and the second in the Big 12 Tournament. Pohlmeyer was able to secure wins with rideouts in both instances.

The Jackrabbit has been injured this season though, so he may not see the mat tonight. Peyton Smith has been filling in for Pohlmeyer this season.

The second thing to watch for is the only scheduled match between ranked opponents. At 184 pounds #17 Zach Carlson is set to take on #4 Taylor Lujan. The two have never met before, but last season UNI’s 184 pounder Drew Foster defeated Carlson 3-1 in their dual match.

Also Cody Caldwell is back in Cedar Falls with SDSU. You might remember Caldwell from his four years of starting for UNI as well as a 2014 NCAA tournament birth.

The Panthers are 39-5-1 all time against the Jackrabbits, and it’ll be an uphill battle to get to #6 tonight.

As for Missouri, they’ll be a little more of a handful for the Panthers than SDSU, but perhaps not quite as much as they normally are. The Tigers are down a bit this season, but that doesn’t mean there won’t be some matches to look forward to.

Number one on that list is at 149 pounds, where #4 Brock Mauller will take on #7 Max Thomsen. Similarly to Thomsen and Pohlmeyer, these two have met twice, both last season, and both losses went against Thomsen. The Panther dropped a 9-3 decision at Missouri and a loss by fall in the bloodround of the NCAA Tournament.

The second match was a little odd because Mauller scored almost exclusively off Thomsen’s shots. The Panther shot so much he was able to draw three stall warnings from Mauller, the final taking the match to sudden victory. Thomsen was in on a shot but wasn’t able to finish and got taken down and pinned.

Missouri’s bench was very unhappy about how the match was officiated. Below is the tweet that I put out immediately following the match involving then Missouri assistant and current Maryland head coach Alex Clemsen.

So you can pretty much see how I felt about it.

Another match to keep your eye on is at 141 pounds, where Michael Blockhus will take on #13 Grant Leeth. If Blockhus is ready for that next step into mid-ranked status an upset over Leeth would be a big step forward.

The Tigers and Panthers are set for action on Sunday at 2PM. Hopefully there’s not enough snow to keep Missouri from making the trip up north. We should be at both duals so check out my Twitter and the main account for updates!

Intermat rankings used
Sorry for how short the previews are, it has been a busy week