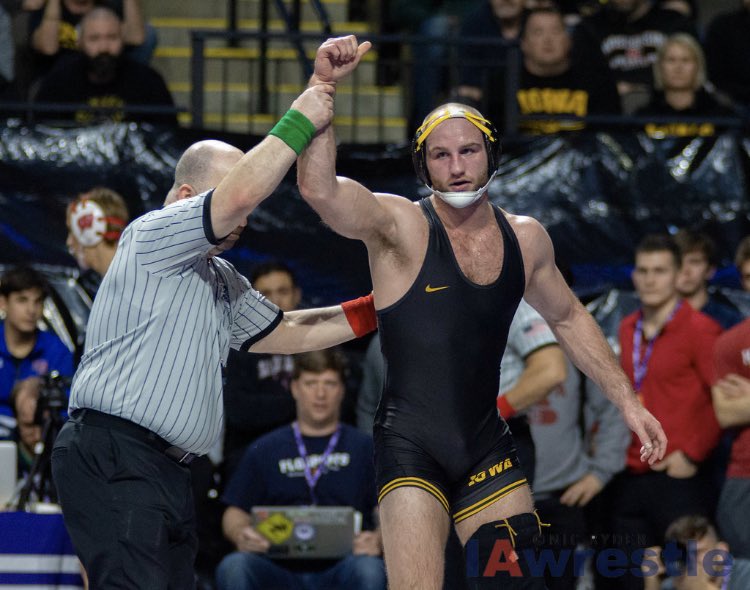 The Iowa Hawkeyes will be leaving Evanston, Illinois with yet another Midlands crown as the program won the tournament for the 29th time and in the process broke the tournament scoring record (a record held by Iowa) ending with 196.5 points. All told the Hawkeyes ended with 5 champions and 12 medalists overall.

With the nation’s #1 and #2 ranked wrestlers slotted to face off for first at 133 pounds, the tournament started the finals at 141 pounds which meant a fast opportunity for Max Murin to earn some redemption. As a freshman Murin reached the finals before falling short of a title to Northern Iowa’s Josh Alber.

Murin would not be deterred in his second attempts as he came away with a 5-3 decision over Campbell’s Josh Heil to win his first Midlands title. It was Heil who got on the score board first with a reversal in the second period, but Murin stormed back with a pair of escapes and a takedown to build a 4-2 advantage. Murin gave up a late escape in the match, but with riding time he finished with his two point margin.

That led into the next Hawkeye taking to the mat in the finals as Pat Lugo squared off with North Carolina’s Austin O’Connor, the top rated wrestler in the country. Lugo was the first to strike in the match earning a takedown midway through the first period.

Lugo increased his lead in the second with an escape and his second takedown. Lugo continued to control the match taking on a final takedown in the third period to earn an 8-4 victory over the Tar Heel.

Iowa made it three-for-three after the 157-pound bout as Kaleb Young took a 5-3 decision from Army’s Markus Hartman. Young got on the board first in the second period with a reversal. Hartman got a reversal of his own in the third and the duo eventually went to overtime tied at three. Young was able to seal the match with a takedown to win his first Midlands crown.

The win also marked Young’s 20th win at the Midlands tournament, which put him into the exclusive 20-in-4 club, which requires a wrestler to record at least 20 wins in their first year of competition. Young is the 10th Hawkeye to earn the honor with the last member being Brandon Sorensen (2013-16).

The Hawkeyes had a repeat champion at 165 pounds where top seeded Alex Marinelli took out Virginia Tech’s David McFadden 5-3. Marinelli notched two takedowns against the Hokie wrestler in the first and second period and the only points surrendered where escapes. It was Marinelli’s third career Midlands title.

The Hawkeyes fifth finalist of the night Abe Assad – wrestling unattached – fell in his finals match to Northern Iowa’s Taylor Lujan, who was the bracket’s top seed. Lujan won the meeting 4-0 with a first period takedown, second period escape, and exactly one minute of riding time.

Bringing home the fifth title for the Hawkeyes on the evening was heavyweight Tony Cassioppi, who defeated Matt Stencel of Central Michigan 5-1 to claim his first ever title. As a true freshman Cassioppi only took two losses, both being at the Midlands tournament. One of those was a first period fall defeat to Stencel, would go on to earn All-America status in 2019. Cassioppi’s win shows just how far the young wrestler has come in one year’s time and cements his status as an All-American contender.

In the last bout of the night the Hawkeyes finished in second as Wisconsin’s Seth Gross came out on top of top seeded Austin DeSanto in a tight 6-5 battle. Gross was able to strike first by attacking right off the whistle which led to his first takedown. DeSanto managed to mount a comeback in the third period, and was in on Gross’s legs near the end of the match, but was unable to convert for the winning score.

Other medalists included Spencer Lee (125), Vince Turk (149), Jaren Glosser (149), Cash Wilcke (184), and Jacob Warner (197). Three of those wrestlers ended their tournaments prematurely with Lee forfeiting all the way to sixth place after he medically forfeited his semifinals bout. Glosser suffered an injury in the consolation semifinals which led to his sixth place finish, while Turk forfeited in the third place bout.

Wilcke dropped his Round 16 match to Wisconsin’s Johnny Sebastian and battled all the way back for third. Warner was the only other Hawkeye wrestling in the consolation medal round and he dropped his third place bout to Princeton’s Pat Brucki.