The Road to Four Titles : Allard and Happel Seek History in 2020 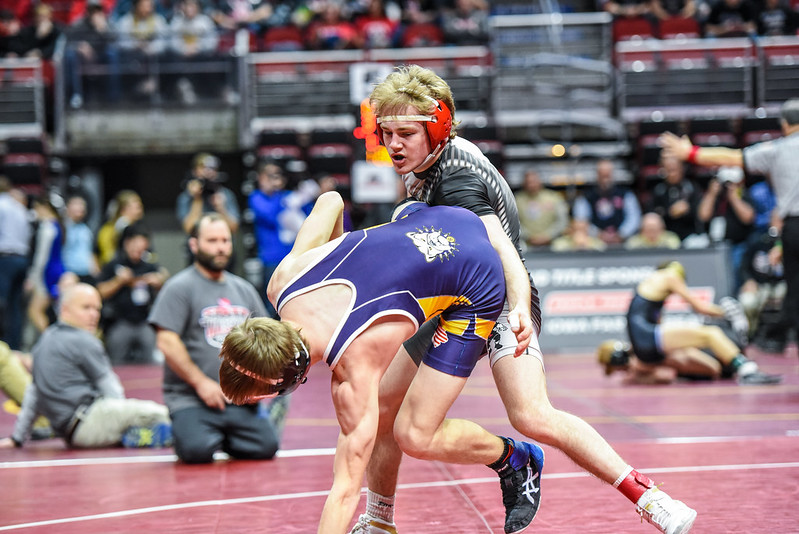 The 2020 State championships are shaping up to a historic season as two Iowa scholastic wrestlers will look to close out their careers as four-time state champions. The 2019-20 season kicked into high gear this past weekend as a number of the state’s more high profile tournaments took place – the Cliff Keen Independence Invitational and the Keith Young Invitational.

With the season now picking up steam it means wrestlers are beginning their climb to the top of the podium on February 22nd in Des Moines. For some wrestlers it will be for the last time and for an even smaller group it will be for a chance at history.

Entering this season there are eight potential wrestlers on track to finish their careers as a four-time state champion. The closest two are Lisbon standout Cael Happel and West Sioux prep Adam Allard. Halfway to the honor is Centerville’s Matthew Lewis and five freshmen were title winners in 2019 which means they still have a long road to navigate.

Iowa’s current four-time state champion club includes 27 members, with the most recent wrestlers to join being Fort Dodge’s Brody Teske and Underwood’s Alex Thomsen who both won title number four in 2017. Having two wrestlers join the group in the same year is not an uncommon trait, almost half of the members won their fourth title the same year as another wrestler.

The first duo to make it in the same year was in 2003 Don Bosco’s Mack Reiter and Hudson’s CJ Ettelson. Those two started a trend that would later include the 2005 class North Linn’s Dan LeClere and Linn-Mar’s Jay Borschel, Southeast Polk’s Cory Clark and Des Moines Roosevelet’s John Meeks in 2012, Creston’s Jake Marlin and Denver’s Brandon Sorensen in 2013, and the aforementioned Teske and Thomsen in 2017.

This year’s senior duo share a few similarities worth noting. Both wrestlers compete in Class 1A and both have signed to wrestle for the University of Northern Iowa next season in Cedar Falls. Happel committed to the Panthers shortly after winning his third title last winter and Allard announced his commitment to the program this fall.

For Happel’s story there is the added community and family component that he will be chasing this February. Lisbon is one of the state’s more accomplished programs in history and has produced a number of individuals that have had successful careers in high school and beyond. Among them are three four-time state champions and six (including Cael) three-time state champions.

That group includes Cael’s father Dean who was a three-time state champion in the 1980’s and Cael’s brother Carter who won his fourth state title in 2016. Cael has already cemented himself as great wrestler, and this season will only continue to add to his growing resume of accomplishments. He already added a tremendous landmark win this past weekend in Independence where he defeated the nation’s #2 ranked wrestler Ryan Sokol of Minnesota.

In contrast to Happel, Allard comes in with a much different story. Almost the opposite. While Happel hails from the eastern side of the state, Allard has been making a name on the western side. While Happel competes for one of the state’s most storied programs, Allard has practically rewrote all of West Sioux’s record books. Lisbon has produced multiple wrestlers who have competed for the likes of the University of Iowa during the Dan Gable era, Allard will be West Sioux’s first Division I wrestler.

While the two have very different stories coming into their final year, both will be chasing this same prize in February.

A lot of the “four-timer” talk will be centered around Happel and Allard (and rightfully so), but there is another wrestler who has reached the midpoint of the accomplishment – Centerville’s Matthew Lewis. This season Lewis will attempt to win his third state title with the eventual prize being Iowa’s 30th member of the four-timer group in 2021.

If Lewis reaches the accomplishment next season he would become the second Centerville wrestler to do so, joining 2006 graduate TJ Sebolt. Most folks are well aware of the Sebolt name as he has assembled one of the top wrestling clubs in the country.

Lewis began this season ranked #1 at 120 pounds and will face competition from the likes of Colby Lillegard (Bondurant-Farrar), Cole Whitehead (Center Point-Urbana), and Kolten Crawford (Union) among others.

The 2019 season also saw five wrestlers from the freshman class crowned as state champions, putting them on the track to win four titles. While these five wrestlers have earned heaps of recognition already, its a rather obvious statement, but there is a long time between now and 2022 to stay perfect.

In Class 3A the lone freshman state champion was Ankeny’s Trever Anderson – who is the current top ranked wrestler at 113 pounds. His weight is chalk full of talent which will make repeating difficult. The top half of the weight features 2019 state finalist Blaine Frazier (Notre Dame – up from 2A) and his finalist opponent from last year Jace Rhodes (Mason City). South Dakota State commit Bailey Roybal (Waverly-Shell-Rock) is also a contender at this weight.

Class 2A features Crestwood’s Carter Fousek and Solon’s Hayden Taylor who are ranked #1 at 113 and 138 pounds respectively. Both wrestlers are coming off of title winning performances in Independence this past weekend. Fousek’s title came against Anderson, while Taylor won at 145 pounds and is expected to be down to 138 well before the postseason.

Carrying top rankings in Class 1A are New London’s Marcel Lopez and Lisbon’s Robert Avila at 113 and 132 pounds respectively. Like several other wrestlers mentioned, Avila won the Independence invite and is quickly establishing himself as one of the top wrestlers in the nation.

2 thoughts on “The Road to Four Titles : Allard and Happel Seek History in 2020”