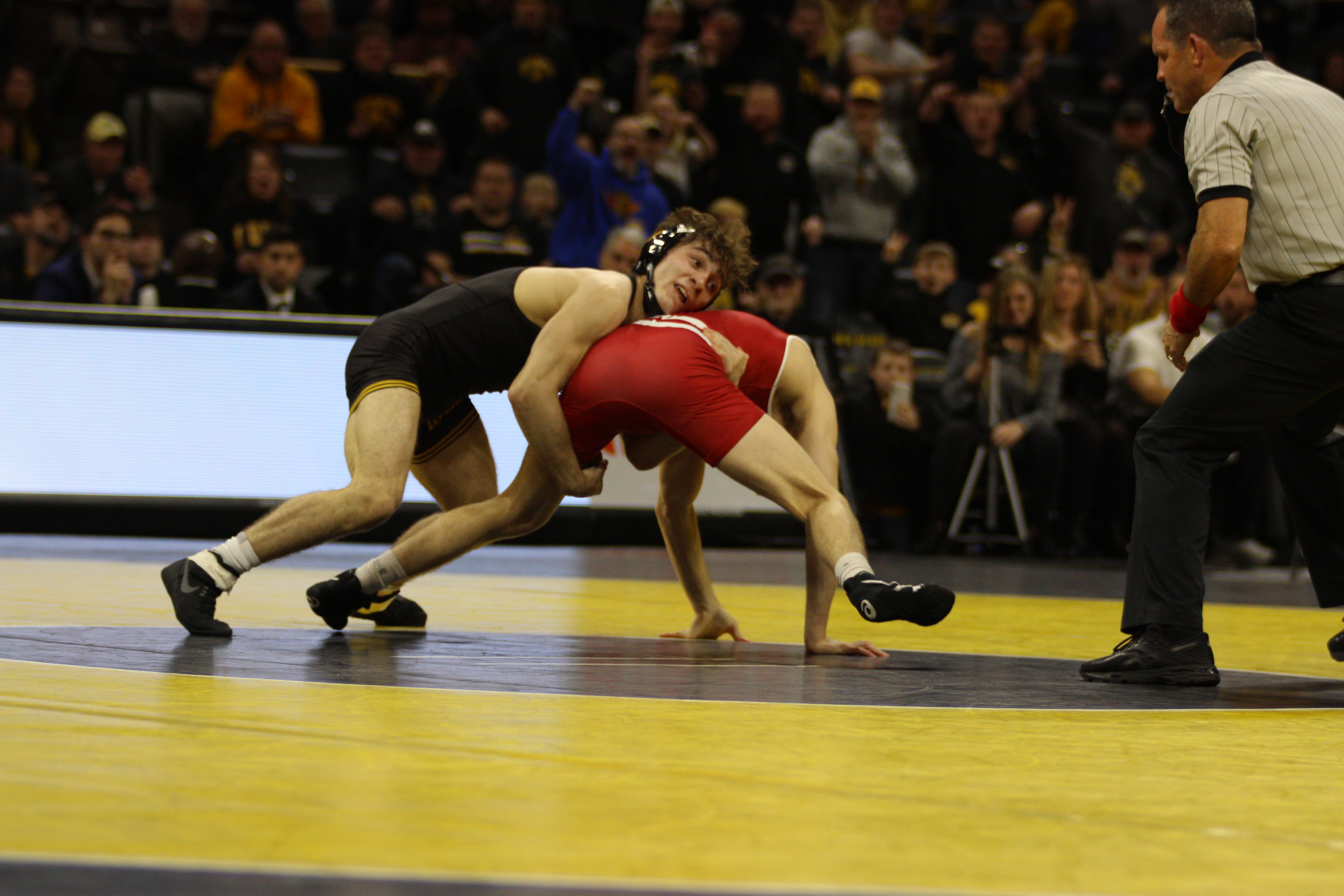 The Iowa Hawkeyes picked up a huge victory at home over the #4 ranked Wisconsin Badger team. The 32-3 win was head coach Tom Brands’s 100th career Big Ten victory.  The meeting featured two marquee matches, including a meeting between the two top ranked wrestlers at 133 pounds Austin DeSanto and Seth Gross and the #2 and #3 ranked wrestlers at 165, Alex Marinelli and Evan Wick. The Hawkeyes managed to come away with both of the highlight matches as they ran away with the dual.

In the night’s opening bout top ranked Spencer Lee faced off against Badger senior Michael Cullen at 125 pounds. In typical Lee fashion he raced out to an early 6-0 lead after a takedown and a four nearfall turn. Lee managed to tack on two more four point turns to end the first period up 14-0. An early second period reversal was all Lee needed to finish off the technical fall, 16-0.

The aforementioned meeting between DeSanto and Gross lived up to the hype as the two wrestlers delivered an exciting match at 133 pounds. DeSanto managed to get in the score column first with a takedown, and was in deep on a second attempt before Gross was able to fight out of the Hawkeyes’ leg lock.

With Gross known for his ability tot turn on top, DeSanto opted to start neutral in the second period and he capitalized by getting a second and third takedown in the period with a key ride out to end the period up 6-2.

In the third Gross picked his strongest position top and worked to turn DeSanto. While the Hawkeye wasn’t able to get out from underneath in the final period, he managed to come out on top 6-3.

Making his dual season debut was sophomore Max Murin which set up a top ten showdown a top ten showdown at 141 pounds with Tristan Moran. Neither wrestler managed to break through for an honest attempt in the first period to remain scoreless after one. In the second Moran escaped quickly to start the period, but a beautiful double leg put Murin on the board as he netted a takedown. Moran escaped to end the period tied at two.

In the third Murin added an escape of his own to retake the match lead. Murin was close on another score midway through the final period, but the final score held at 3-2 in favor of the Iowa wrestler.

In the third straight ranked head-to-head meeting once again it was the Iowa wrestler striking first with an opening takedown at 149 pounds, but Pat Lugo was unable to ride Cole Martin, who was able to escape after five seconds. In the second Lugo added an escape and takedown. Two more Martin escapes were the remaining points added in the match with the final being a 5-3 decision for Lugo.

At 157 pounds Kaleb Young came out firing for a takedown, but failed to maintain control and wound up giving up a reversal and stall warning in the process. After getting back to his feet Young was able to quickly take control back in the match with a standing cradle to a takedown, and a third takedown with under a minute to go in the first period.

A Young escape was the only score in the second, which meant Young needed to push the pace to earn bonus. He managed to net one takedown in the third and was in deep on a leg for a second but fell just short of the major decision, 12-6.

In the night’s co-main event Alex Marinelli managed a first period takedown by controlling the collar tie position and reach in to the far leg for the match’s first score. Like Gross, Wisconsin’s 165-pound starter Evan Wick is also known for being dangerous on top, which is likely why Marinelli chose neutral in the second period though the Hawkeye was not able to add to his lead.

In the final period Wick chose down and got an escape tying the match at 2-2. With time winding down Marinelli’s relentless pace paid off as he secured the match winning takedown followed by a mat return and ride out to win 4-2.

Business as usual for Iowa at 174 pounds where Michael Kemerer ran through Wisconsin freshman Jared Krattinger, pinning him in the third period. Prior to the fall Kemerer was up 17-6 and was in the process of adding four nearfall with well over three minutes of riding time.

Murin wasn’t the only Hawkeye that made his lineup return in this dual as senior Cash Wilcke was given the start at 184 pounds against the ranked Johnny Sebastian. The veteran wrestler came out aggressive scoring a quick first period takedown before Sebastian managed to get out. The Badger wrestler was able to tie the match with a second period escape. In the final period Wilcke retook the lead with an escape of his own, but Sebastian followed with a takedown on the edge to go up 4-3. A Wilcke escape left things tied in regulation.

In the second sudden victory Sebastian was able to win the match, 7-5.

Jacob Warner jumped out to a quick lead in his match at 197 pounds against Taylor Watkins. The match slowed down from there with the duo exchanging escapes in the second and third periods and Warner then adding a tack on takedown with seconds remaining.

In the night’s final bout Iowa freshman Tony Cassioppi faced his stiffest test to date taking on the top five ranked Trent Hilger. Roughly midway through the first period Hilger attempted a shot, but a Cassioppi counter led to the Hawkeye scoring yet another first period takedown for the home team. Hilger eventually earned an escape, though not before Cassioppi crossed the one minute mark for riding time.

Cassioppi took down in the second period and managed to get his escape just past the minute mark. With the match at 3-1 heading into the final period, Hilger took down to try and narrow the gap. The Badger earned his second escape in less than ten seconds to make it a 3-2 match, which was the final score.

The Hawkeyes have one more remaining dual in the 2019 calendar year and they will hit the road east to take on Princeton in New Jersey. That dual will take place next Sunday at 1:00 PM Central Time. The Princeton dual will be the Hawkeyes final competition before the Midlands in late December.