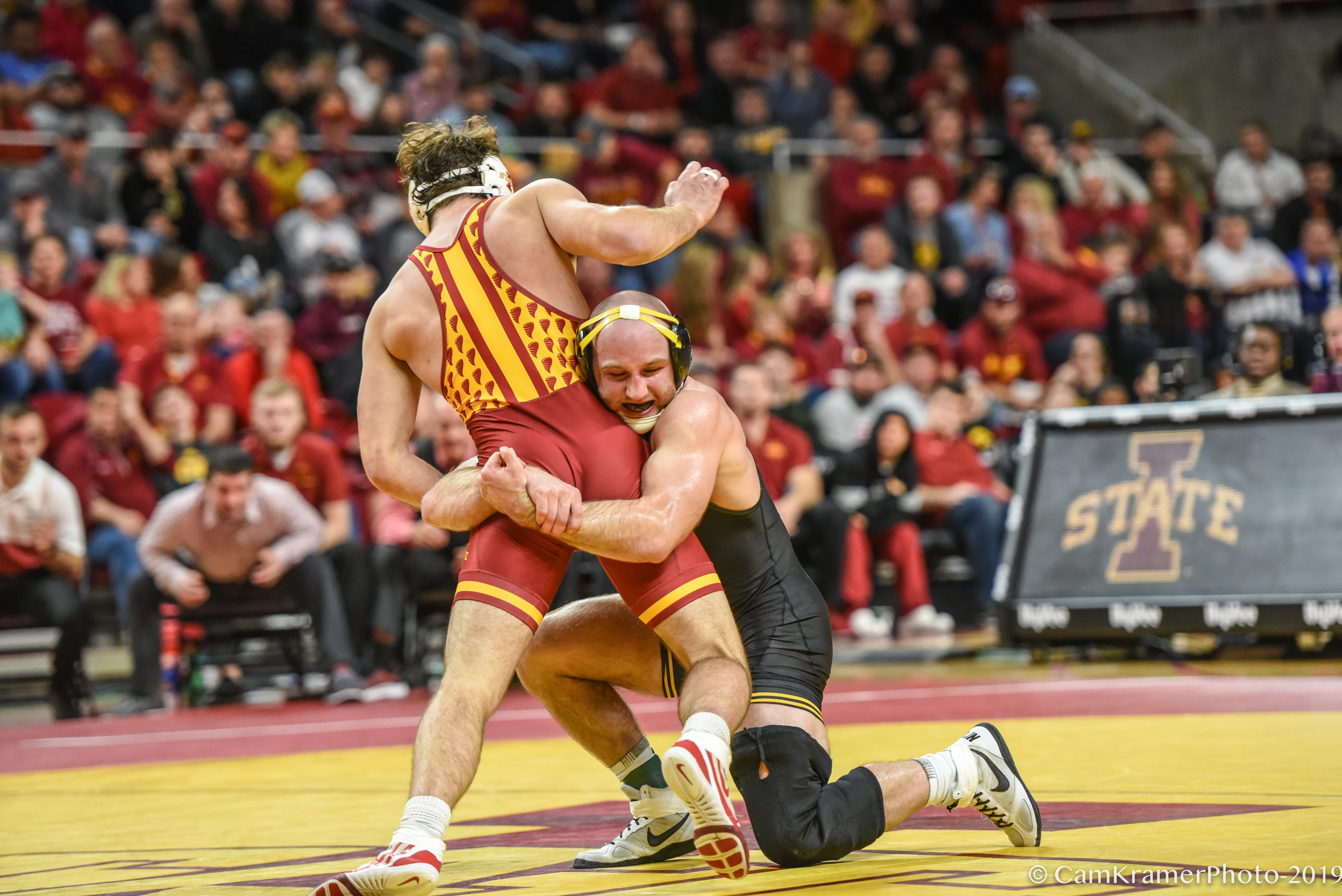 The University of Iowa returns to Carver for their last home dual of the 2019 calendar year. The team will welcome in a much improved Wisconsin Badger program that will tout an undefeated record. The Hawkeyes have won the last eight meetings against Wisconsin, including last year’s 35-2 victory in Madison.

The Badger program is led by a staff with plenty of Iowa ties at the helm. Assistant coach Matt McDonough was a three-time All-American under Tom Brands at the University of Iowa and is a Linn-Mar high school graduate. Head coach Chris Bono and Associate Head Coach Jon Reader are Iowa State alumni that have their own history against the Iowa program as well.

Speaking of Bono and Reader’s former university the Hawkeys are coming off an impressive 29-6 victory over their instate rivals, taking eight of the dual’s ten matches. Among some of the biggest standout performances were Pat Lugo, who managed his first win over Jarrett Degen at 149 and the big hero of the day was 184-pound freshman Nelson Brands, who upset the then top five ranked Sammy Colbray.

Iowa junior Spencer Lee was near flawless in his 17-2 technical fall over Alex Mackall last Sunday and he figures to be as big of a favorite leading into this Sunday’s meeting against Michael Cullen. One big question we will have is whether or not this will be the last opportunity to see Lee compete for Iowa until the Midlands tournament at the end of December.

Earlier in the year we had mentioned that Lee will be attempting to qualify for USA Wrestling Olympic Team Trials this April. The largest qualifier for the Trials takes place in mid-December in Texas and Lee will most likely be headed there to secure his Trials bid. Iowa has one more dual in the month of December – a road trip to Princeton, but Lee may opt to focus solely on freestyle in the coming weeks.

Tom Brands also made the decision to weigh in Aaron Cashman at 125 last weekend in Ames. In his post-match press conference the head coach mentioned it was to give his young freshman the opportunity to get a feel for the one hour weigh in feel. We shouldn’t completely rule out the possibility of seeing the younger Hawkeye this weekend in Carver.

There still aren’t a ton of answers on what the plans for Iowa’s 133 and 141-pound lineup spots. In the team’s first dual Austin DeSanto manned 141, but against Iowa State he dropped down to 133 to face Todd Small. DeSanto was victorious in both matches.

The big lead in for this weekend’s matchup is a DeSanto vs Seth Gross meeting his the potential of being the biggest match of the weekend if these two wrestlers do end up facing one another. As the weight’s top ranked duo this could be the first of many potential head-to-head meetings in the season.

From the matchup perspective Gross is renowned for what he can do in the top position which could be a cause for concern for DeSanto who has struggled on bottom in the past. DeSanto on the other hand is recognized for his ability on his feet and now entering the second half of his career his mat wrestling has had more time to improve from his earlier career results.

If the Hawks opt to send DeSanto back up to 141 for the week that will leave 2018 starter Paul Glynn or freshman Gavin Teasdale as Iowa’s options at 133. Both wrestlers traveled to Iowa State this past weekend. Obviously with Gross being the #1 ranked wrestler Iowa will be viewed as the underdog regardless of which wrestler goes.

How Iowa manages 133 has a direct impact on the 141-pound situation. It’s clear that Max Murin has been at less than 100 percent returning against an opponent of Tristan Moran’s quality would be less than ideal. If DeSanto competes at 133 we could see junior Carter Happel get another start after a tough loss against Iowa State’s Ian Parker this past Sunday.

Coming off his big win in Ames is Lugo, who will face Cole Martin, who he sports a 2-0 record against. Last season Lugo won a tight 3-2 sudden victory match in the dual, but was able to widen the margin to 11-6 by the Big Ten tournament.

Another wrestler looking to bounce back from a tough loss in the Cy-Hawk dual is junior Kaleb Young, who went down to the Cyclones freshman sensation David Carr, 6-1. He will look to rebound against Garrett Mordel, whom he beat 11-2 in their meeting last season.

While the DeSanto-Gross is probably the headliner, the 165-pound meeting between Alex Marinelli and Evan Wick can make an argument for the co-main event. The Hawkeye currently has won the last three meetings against his Badger counterpart, but every one of Marinelli’s wins have been decided by a takedown margin.

These two have always appeared to be separated by a slim margin, as evidence by their box scores, but the trend suggests Marinelli may have figured out a game plan to beating Wick that as long as he executes he can come out the other end a victor.

If there is any wrestler that has picked up right where he left off its Michael Kemerer, who churned out another bonus point performance this past weekend in Ames. While his 174-pound debut was plenty encouraging (a 20 point technical fall) his follow up was a ranked win by bonus. All signs point to Kemerer handling his new weight in style.

The 184-pound meeting still holds a little mystery as to what the team will do. Through the first two duals of the season Nelson Brands has looked terrific for the Hawks at this weight, but coach Brands has also made repeated comments about last season’s starter, Cash Wilcke still being an option. Nelson is coming off a huge win, so the team could continue to ride the hot hand, or they could give Wilcke an opportunity before making a final decision on this weight’s starter going forward (i.e. Midlands).

After a slower-than-expected start against Chattanooga, sophomore Jacob Warner really opened things up last weekend at Iowa State with his 11-2 major decision against Joel Shapiro. The Hawkeye sophomore currently finds himself ranked third in the country heading into this weekend’s matchup.

The final matchup will be a big test for freshman Tony Cassioppi taking on Wisconsin’s All-American Trent Hilger at heavyweight. There are obviously a lot of big expectations for the young Hawkeye, but Hilger is among the top dogs at this weight and is coming a big weekend that moved him into the #3 slot in TOM’s rankings.