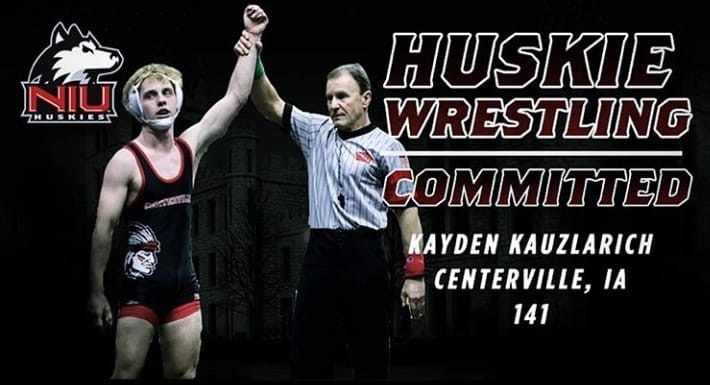 Three-time Iowa state place winner Kayden Kauzlarich of Centerville has committed to wrestle at Northern Illinois University. Kauzlarich placed 7th as a Freshman, 3rd as a Sophomore, and 6th as a Junior. He enters his senior season with a 113-19 career record. Kauzlarich chose NIU over Northern Colorado, Buffalo, and Indiana.

He said that he chose the Huskies because of “The coaches and the atmosphere at NIU was amazing. The guys were like a family there and I loved the campus. Coach Ludwig and Coach Moyer are both very successful wrestlers and I believe they can turn me into the best wrestler I can be.”

He also added “I would like to thank Scott Sebolt, Matt Johnson, my family, and teammates for everything they have done for me because without them I’d be nowhere.”

Kauzlarich said that he plans to wrestle at 132 pounds this season and projects at 133 pounds at the next level.

He joins Josh Vis of Cedar Rapids Kennedy in the 2020 recruiting class. Northern Illinois currently has Iowans Drew and Bryce West on the roster and coach Dominick Moyer is a native of Oskaloosa.