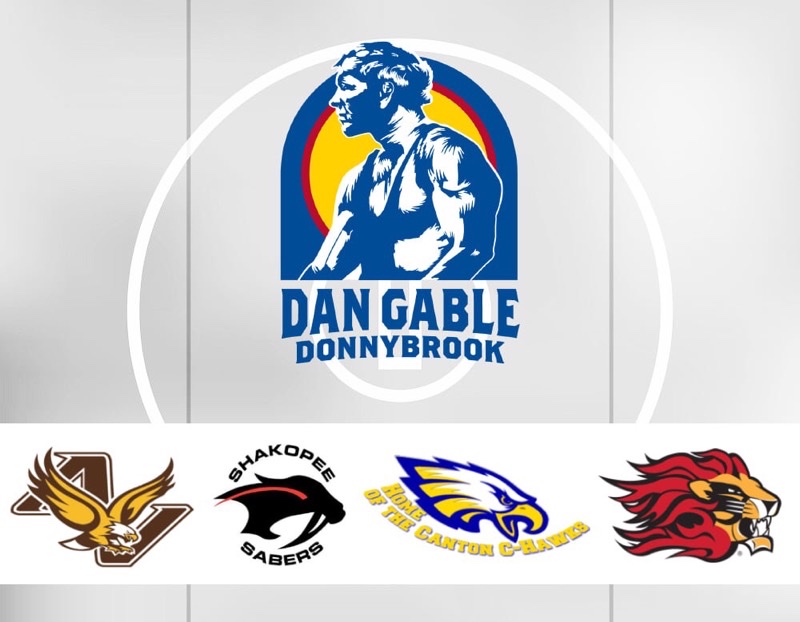 The Dan Gable Donnybrook has announced the first four teams that will be in attendance of the newly formed Iowa City based tournament. The first four teams announced of the planned 32 team field are instate 3A school Linn-Mar, Minnesota programs Apple Valley and Shakopee, and Canton, South Dakota.

Most folks are well familiar with the Apple Valley name, having produced multiple wrestlers that have gone on to perform at the NCAA and even World level in terms of wrestling performance. Some of the most recent alums include Seth Gross and Mark Hall, who have both already won a NCAA title and could add to their respective resumes this coming March.

Shakopee is another Minnesota power that is coming off the 2019 Class AAA state title. They actually nudged Apple Valley by double digits to claim the top spot in 2019.

The Canton, South Dakota program is also a big name program from our state’s western border. They are the defending class B state champions and are led by three-time state champion, and North Dakota State commit, Kellyn March.

And the first instate program announced will be the always solid Linn-Mar team from up the road. The team returns four state qualifiers coming into this season, and three of those wrestlers will still be around for the Donnybrook tournament debut in 2020. The squad’s biggest name is junior lightweight Brandon O’Brien, who has racked up a ton of awards over the past six months including a couple of national titles at USA Wrestling events.

Original Press Release about the tournament:

CORALVILLE – Plans for the Dan Gable Donnybrook wrestling tournament were unveiled by Xtream Arena and GreenState Family Fieldhouse. The 32-team individual format will include some of the best high school teams from Iowa and the surrounding states on December 4-5, 2020. It will include both a boys and girls division and marks the first announced sporting event for the facility.

“A ‘donnybrook’ is a free-for-all brawl,” said one of the new events key sponsors, Josh Schamberger, President of Think Iowa City. “Our hope is that through exceptional event production and top level competition – both attributes that are required with an event that boasts Dan Gable as its namesake – that wrestlers from the Midwest and ultimately the country will put this tournament on the top of their list. My goal as a sponsor and supporter of this event is nothing short of making the Dan Gable Donnybrook the high school aged equivalent of the Yarygin.”

“I am excited to join Josh, Nathan and their teams to help develop this new annual tournament here in Coralville. Josh and his team have played significant roles in producing the Olympic Wrestling Trials and UWW World Cup events so I know it will be a top notch event.” said tournament namesake and wrestling legend Dan Gable.

Any/all annual proceeds of the Donnybrook will be split between two area non-profit efforts. The first is the Veteran’s Liberty Center in Iowa City. This non-profit provides assistance to Veterans with counseling, job assistance, mobility, transportation, and food and clothing assistance. The second beneficiary will be in the form of establishing a fund to better promote and grow girls wrestling in Iowa.

The tournament is co-produced by the same organizations that produced the US Olympic Wrestling Trials, UWW Freestyle World Cup, and the Conflict at Carver.

“The new facilities set to open next August in Coralville are perfect for this event,” said Nathan Eichorst, chief event organizer. “We’ll be utilizing both Xtream Arena and the GreenState Family Fieldhouse. The atmosphere that weekend will be awesome!”

“I’m excited to work with Josh and his team at Think Iowa City,” added Eichorst. “They know how to put on top notch events and our visiting teams will receive the red carpet treatment.”

The tournament format is a team individual invitational. Teams are invited, but wrestlers will be seeded and bracketed to compete individually and earn points for their team.

“This tournament has my name on it. So you better come to compete,” added Gable. “Anyone who wins this tournament will have accomplished something special.”

About Think Iowa City
Think Iowa City is the visitor brand identity for the local Iowa City/Coralville Area Convention & Visitors Bureau. The CVB works to attract visitors, meetings, groups, and events to the area through destination marketing, outreach, and facilitation. A 15-member board representing the city councils of Iowa City, Coralville, North Liberty, the University of Iowa, Johnson County Board of Supervisors, and the area’s hospitality industry guide the private nonprofit.