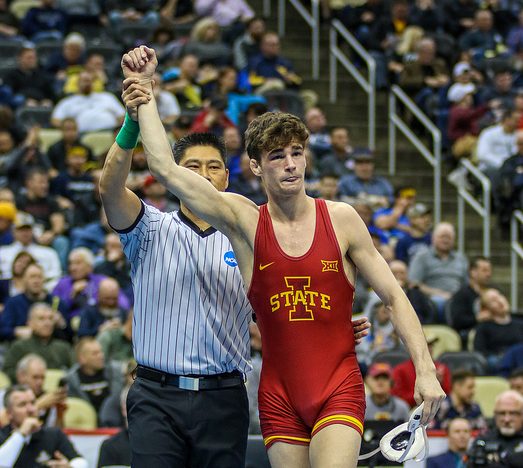 If last year is any indication of the momentum that is building in Ames the fans of the Iowa State Cyclones should be ecstatic about the direction of the program. In just one year’s time head coach Kevin Dresser was able to dramatically improve his team’s performance in just his second full season at the helm. In 2018 the team sent one lone qualifier to the NCAA tournament, and by year two the team sent all but one of their starters to national’s and put two on the podium.

A large credit to the turnaround is directly tied to what Dresser has been able to accomplish since he accepted the Iowa State job. One third of the team’s NCAA qualifiers transferred into the program and a lot of that had to do with Dresser and his staff. Two of those transfers were the same wrestlers that earned All-America honors which gave the team the juice to jump into the top 20 at the NCAA tournament.

Heading into this season the team returns a lot of those same wrestlers from the previous year that played a big role in the program’s resurgence. Only one wrestler, now graduate assistant coach Willie Miklus, graduated from last year’s starting lineup and only one projected starter will be a senior in this year’s lineup.

One of the biggest areas of improvement last year was the addition of Alex Mackall, who took over the starting spot a year ago after transferring from Rutgers. Mackall was 27-12 as a sophomore and qualified for the NCAA tournament where he went 2-2. He enters this season ranked #14 according to The Open Mat. This is a rather top heavy weight so breaking through to the podium will be a tall task for Mackall.

Behind Mackall is an interesting name to watch, and if you follow IAwrestle you should be well familiar with this name, in Albia standout Aden Reeves. A knee injury prevented Reeves from competing at his senior state tournament and has held him out of most wrestling activities until recently. Given his time away from the mat the expectation is that Reeves will redshirt as he transitions back into training. Whenever he does return to competition he will certainly be worth keeping an eye on, as many are hopeful he can contend with Mackall for the starting spot in the 2020-21 season.

One of the Cyclones biggest performers last season was redshirt freshman Austin Gomez who had a breakout season going 24-7 at 133 pounds. There was no questioning Gomez’s talent coming out of high school and in his first year as a starter he looked every bit the part of an All-American caliber wrestler. While his 2019 season didn’t end on the podium, many are bullish (including us) that he will be in 2020 and some are even viewing him as a NCAA finalist contender. The Open Mat lists Gomez at #7 and those rankings (dated October 2nd) still list Daton Fix who announced he will be taking an Olympic redshirt this season.

With no Fix in the picture that should open the door for Gomez to be the front runner for a Big 12 title and if he puts together a strong season he will be in contention for one of the top seeds in March. Gomez is listed at 141 pounds for Iowa State’s inter-squad, Cardinal and Gold dual, but all signs point to the sophomore being at 133 this year. For depth the Cyclones will feature two-time NJCAA champion Todd Small.

One wrestler the staff will be hoping to see a breakout from this season is junior Ian Parker, who enters his third season as a starter at this weight. Parker begin his career at 133, but later moved up in season to 141 where he then took out two-time NCAA champion Dean Heil. Last year Parker earned his first trip to the national tournament where he went 1-2, which he will be looking to improve upon in 2020. Entering the season he is ranked #15 by TOM.

The lone returning All-American for the Cyclones is at 149 pounds, and that is junior Jarrett Degen who comes in with a preseason ranking of #4 at 149 pounds. This weight definitely cleared out from a year ago, which gives Degen an excellent opportunity to go out and establish himself as the top threat in the nation. Degen finished seventh at last year’s tournament, and continues to show signs of progression on the mat. With his unorthodox style of wrestling, Degen put himself into troubling situations as a freshman, but he noticeably improved in that respect last season. If he can continue to tighten up in that area and given his length advantage over his opponents he will be a difficult matchup for anyone in the country.

Speaking of difficult matchups, the staff, fans, and the entire country are excited to see freshman David Carr unleashed on the 157-pound field. One of the top blue chip recruits in the class of 2018, Carr is already being discussed as a title threat and for good reason. While he may only hold the #15 preseason ranking, most are well aware of Carr’s potential and that ranking is a product of his limited schedule. His biggest opportunity to get in some quality wins was derailed when he was ill during the Southern Scuffle tournament. However, while Carr is still looking to prove his mettle in the NCAA ranks, he blew up the freestyle scene this summer by winning a Junior World title. Carr wrestled at 74 kg this summer (equivalent to 165 pounds) which means he dominated a field without needing to cut any weight.

The addition of Carr to the lineup means that 2019 Big 12 champion Chase Straw will need to move up the lineup and battle for the starting spot at 165 pounds. This is the weight that has a lot of bodies contending for a starting spot (the Cardinal and Gold dual listed seven guys wrestling off for the spot), but Straw is definitely the most experienced wrestler in the group and front runner. Last season Straw needed to win a conference title to automatically qualify for the national tournament, and he did so in thrilling fashion edging Oklahoma’s Justin Thomas. This is a weight that has a lot of quality talent, so getting back to the NCAA tournament will be no walk in the park for the senior.

While there is no question that Gomez was the breakout freshman last season, his fellow classmate Marcus Coleman quietly put together a strong first season in the lineup at 174 pounds. Currently ranked #17 by TOM we will now see if Coleman is able to take the next step in his career to go from a guy knocking on the door to the national tournament, to a guy knocking on the door of the podium.

Speaking of progression Iowa State will be looking for 184-pound starter Sammy Colbray to take his next step by making his way on the podium after coming close in 2019. He started his career as a 197, but Dresser was able to convince the former blue chip recruit to cut down to 184 last season and the move paid off. Colbray improved from a 16-13 record to 28-8 record and was one win away from All-America honors as a sophomore. If Iowa State is going to take another step forward as a program it will come from guys like Colbray who continue to progress under the staff.

With Miklus graduating it opens up the 197-pound spot in the lineup and we will see one of two freshmen battle it out for the right to start. The battle will be between former West Des Moines Valley prep Joel Shaprio, who is coming up from 184 pounds and Iowa City West’s Francis Duggan, who is coming down from heavyweight. Both wrestlers had solid redshirt seasons (25-5 and 18-9 records respectively), but nothing in terms of pointing to a clear front runner for this spot. Without a lot of data to go on at this weight for this duo, it’s difficult to judge preseason expectations on anything other than their obvious talent they had coming out of high school that labeled them as top 100 recruits.

Returning for his junior season is heavyweight Gannon Gremmel, who enters his second season as a starter. Last year Gremmel’s preseason expectation was to earn a trip to the national tournament, which he did going 1-2. This season Gremmel is ranked #19 in TOM’s preseason rankings and could be another key cog in the team’s overall progression with another jump.

Iowa State will begin the season with three home dates in November, the Harold Nichols Cyclone Open on November 10th and then they host Bucknell and Iowa on back-to-back weekends. In December they will head out to Vegas for the Las Vegas Cliff Keen Invitational before hosting Chattanooga to close out their 2019 slate. The dual against Iowa will draw attention from fans for obvious reasons, but the following week in Vegas will be the first opportunity for a lot of this starting lineup to put in a breakout performance.