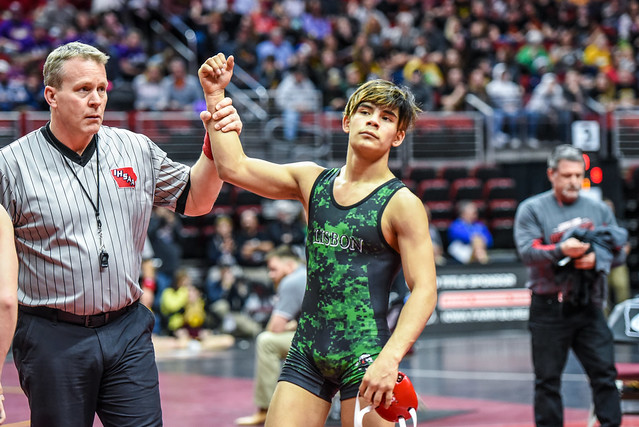 We have added three more great matches to the card for the 2019 Night of Conflict on Saturday, October 19th. The Night of Conflict will take place at the Five Sullivan Brothers Convention Center in Waterloo, IA and will feature some of the state’s top talent. The event doors open at 5:30 PM with first whistle to blow at 6:30 PM.

Avila was a 2019 1A state champion for Lisbon during his freshman campaign and followed that up by becoming a Fargo Cadet Greco All-American this summer. He will face two-time 2A state champion Matthew Lewis of Centerville who has a career record of 87-3. Both wrestlers are on a path to become four-time high school state champions and this is sure to be a fun match!

Genobana has reached the finals of the state tournament in each of his first two years of high school and is a two-time runner up in 2A. He carries a career record of 70-6. Lewis is a two-time state place winner finishing third in 2018 and sixth in 2019. He also placed fourth at the 2019 USA wrestling Postseason Nationals. He has an impressive high school record of 137-13.

Night of Conflict will run alongside Iron Elite’s Fall Nationals that takes place October 19th and 20th. Iron Elite Fall Nationals is the only place to be on Oct. 19 (grades 7-12 boys and girls divisions) and Oct.20 (grades K-6 boys and girls divisions). Saturday’s tournament is expected to be completed by 5:30 PM with Night of Conflict kicking off at 6:30 PM.

One thought on “Three matches added to Night of Conflict”