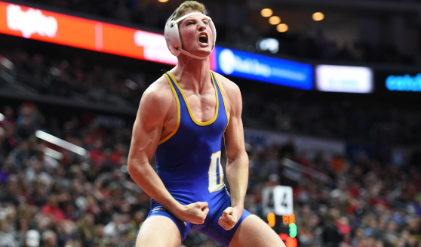 It is never too early to start looking at the Iowa High School wrestling landscape.  Every year we say goodbye to the graduating seniors and they leave a small hole in our heart.  But we are lucky, because there is an enormous amount of talent returning as well.  The 2019-2020 season brings up 371 returning State Qualifiers from 2019.  There are 174 returning State Place Winners, and 18 returning State Champions.

Class 1A is returning seven Champs, 58 Place Winners, and 126 Qualifiers.

Leading the way is a tough Don Bosco team, which is returning 102.5 points from last year’s State Champion squad.  Coach Tom Hogan’s team is returning seven Qualifiers who all made the medal stand in 2019, including two Finalists.

They will be pushed by a couple very solid teams in Underwood and Lisbon.

Underwood is also returning seven Qualifiers, four of whom were Medal Winners, and an impressive three Finalists.

Lisbon has six Qualifiers coming back, with three Placers, and two 2019 State Champions, including Cael Happel who will be seeking to become a Four-Time Iowa State Champion in 2020.

One thought on “Class 1A Top Teams Returning Points from 2019”