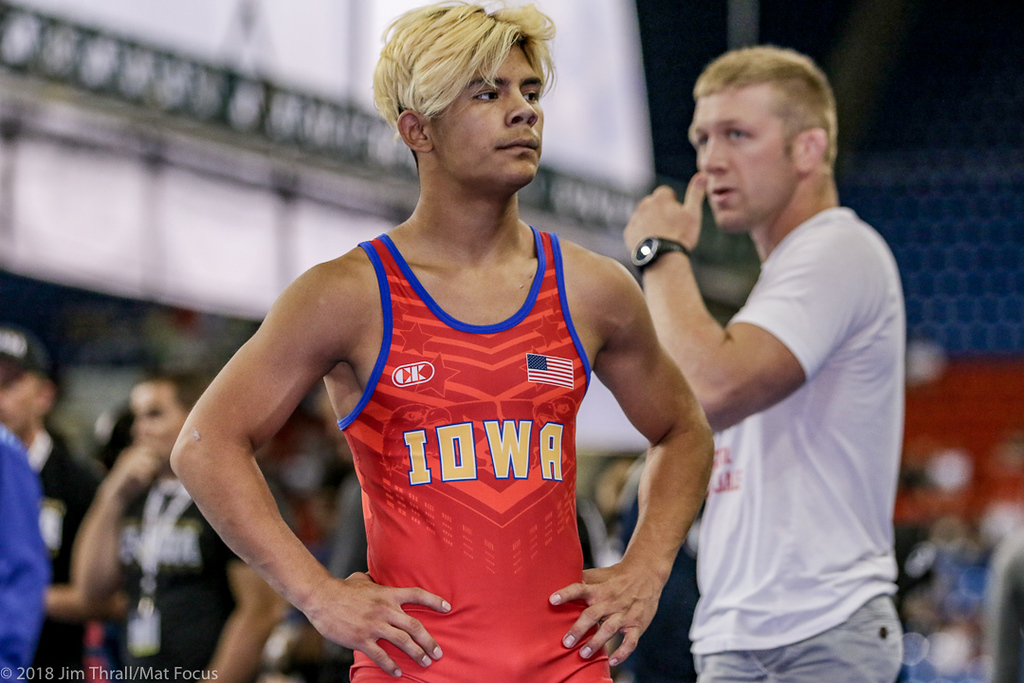 The state of Iowa will pull double duty next week as the 16U team begins their run for a National Duals title in Spokane, Washington. The tournament will be held within the same time frame of the 14U tournament taking place in Indiana. Iowa’s 16U squad definitely has their work cut out if they are going to outperform last year’s output, which included top eight finishes in Greco-Roman and Freestyle. The Freestyle squad brought home a third place finish, and they will attempt to continue Iowa’s long running tradition of finishing in the top ten in both styles.

For more on our 14U team read here.

The current roster is comprised of 27 individuals that have combined for 28 state titles at Iowa USA Wrestling state championships held last month in Des Moines. A total of eight wrestlers hold the distinction of being dual state champions and they are Garrett Rinken (94), Ryder Block (100), Kolten Crawford (120), Nick Hamilton (138), Ben Kueter (152), Adam Ahrendson (160), Jared Voss (170), Wyatt Voelker (195). Two other wrestlers on the team split the freestyle and Greco-Roman titles at 132 pounds, Hayden Taylor and Robert Avila.

In addition to their instate success several team members competed in USA Wrestling’s Regional tournaments, which serve as a qualifier for the National Championships that will be held later this summer in Fargo, North Dakota. One member of the squad captured both a freestyle and Greco-Roman title at the Northern Plains Regional and that was 94-pound standout Rinken. Other champions of the Northern Plains Regional were Rex Johnsen (220) and Hamilton, who both won Greco-Roman. Hamilton was also a runner-up in freestyle and other runner-ups include Riggins (freestyle) and Kueter (Greco-Roman).

The 2018 squad also returns seven members from its 2018 team. Among the top performers a year ago was 106-pound team member Carter Fousek, who was 7-1 in Greco-Roman and 7-0 in freestyle for the team. Both Stevie Ray Barnes (113) and Ahrendson each logged 15 matches a year ago, while Taylor, Avila, Voss, and Walker all alternated starts with other team members on last year’s team.

This is a strong Iowa group heading out to Washington, and several of these wrestlers on this squad are already well recognized names having wrapped up successful high school seasons this past winter. Five wrestlers competed on Saturday night in the IHSAA state finals in February and many others ended their tournament on the podium as well. This 16U team has a tough road ahead of them to match the 2018 team’s success, but the talent is there to surpass even that team’s accomplishments.