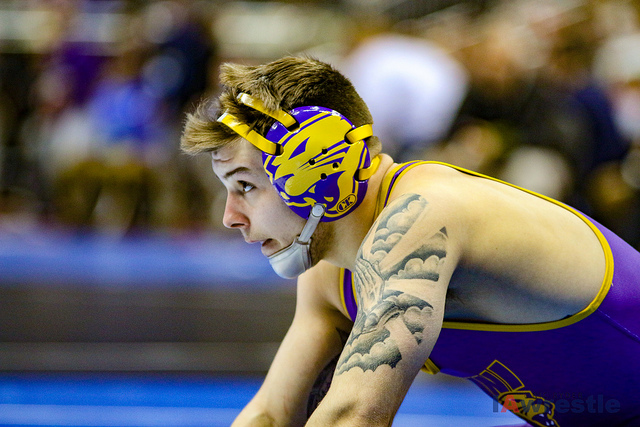 Back in 2015 our top rated wrestler was Northern Iowa’s Josh Alber, followed by Marcus Harrington of Iowa State, and Sam Stoll of Iowa. I think it is more than safe to say my list was far away from perfect, but the positive news is the top three wrestlers all truly did leave an impact on their individual programs.

Back in 2015 we were sky high on Alber, for a variety of reasons. The two biggest being he had the ability to enter the lineup right away (check), become an instant leader of the team (check), and he had a high ceiling (check).

Alber closed out his career a four-year starter for the Panthers splitting time equally between 133 and 141 pounds and he managed to qualify for the NCAA championships all four seasons. His impact in the lineup was immediate. He wrestled in the Midlands finals as a freshman, and book-ended that feat by winning the tournament as a senior. He was also UNI’s highest seeded wrestler at the 2019 NCAA tournament at #4. He will leave a lasting impact on the program as his 109 career victories is good enough for 15th all time at UNI.

Looking back now I think Alber was justified in his top spot. His contributions to the team were vital, and he displayed remarkable consistency throughout all four years. Factor in the hard-to-quantify leadership quality and I think he’s still potentially had the most impact of any wrestler from this class.

The next name on the list was Harrington, who came into Iowa State with a lot of promise after winning a Fargo title as a senior at 220 pounds. As a freshman he was stuck behind All-American Pat Downey at 197 pounds, so he wasn’t able to assume a starting role until his sophomore season. It was in that first year as a starter he qualified for the national tournament at 285 pounds.

As a junior Harrington finished 2-2 at the Big 12 tournament and just missed qualifying for nationals. With one year remaining of eligibility Harrington opted to graduate from Iowa State and enter the workforce stating he was ready to move on from his days as a competitor. He obviously had the talent of being a NCAA qualifier so he would have likely been in contention for another berth this season, but since he ended his career early, we are left with a little bit of what could have been.

Speaking of missed opportunities, that leads into our next wrestler Stoll, who had the most successful career in terms of postseason accolades. Unfortunately, injuries played a big role in why Stoll didn’t have a more successful career.

As a freshman he held a top eight ranking before an ACL tear severely limited him in his first trip to the NCAA tournament. Then after missing the first half of his sophomore season Stoll returned to the lineup only to have another ACL tear cause him to miss almost all of that season.

He finally competed a full season as a junior, and with that he thrived earning All-American status in his second NCAA berth. Stoll then suffered more leg injuries leading into his senior year – including a gun shot wound – though he still managed to qualify via an at-large selection for his third NCAA berth.

Heavyweight can be a difficult weight class for a younger wrestler to break into, but as it turns out the edge stalling rule which was put into place early on in Stoll’s career was a big benefit for him. As a wrestler with a known Greco-Roman background Stoll was obviously comfortable in looking for holds he would tie up in in Greco. His competitors, knowing his background, would immediately back out of those ties. This led to many opponents to having to back all the way out of bounds to clear the tie, which cost them a stalling warning.

Looking back at our original impact review we knew Stoll had a high ceiling coming into the University of Iowa, but he wrestled a limited schedule his true freshman year, which didn’t give us a whole lot of data to go on. He did manage to defeat one NCAA qualifier, but both Alber and Harrington’s resumes were much stronger following their true freshman seasons.

The final two wrestlers in the top five, Nathan Boston and Burke Paddock, both transferred out of their respective schools. As a redshirt freshman Paddock was stuck behind the likes of Alex Meyer and Patrick Rhoads, both of whom were NCAA qualifiers that season. As a sophomore he figured to be a contender for the starting spot at 165 pounds before he left the program.

Boston also transferred out of Iowa State after his redshirt freshman season landing back closer to home competing for Campbell University. Boston was originally viewed as a 125-pound recruit, but he ended his freshman season competing up at 141 pounds for Iowa State. He spent his remaining three years at Campbell competing at 133 pounds, though he never qualified for the NCAA Championships.

Other names from this class:

The Hawkeyes had another senior in their starting lineup this season, and that was North Scott product Mitch Bowman, who wrapped his career as a two-year starter for Iowa and NCAA qualifier. Bowman was likely considered to make the top five back in 2015 to make the list given his high school credentials, Fargo All-American and top 20 ranked wrestler at his high school weight class, though back then his starting opportunities looked limited.

For starters he projected at 174 and 184 pounds, which meant being behind two guys that were eventual All-Americans Alex Meyer and Sammy Brooks. Overall he had a fairly limited record as a redshirt, but he was a real solid contributor to the lineup the last two years of his eligibility.

Now it is time to address the elephant in the room. Of all of the fifth year seniors graduating there is one glaringly obvious wrestler that we haven’t discussed, and that of course is Northern Iowa’s Drew Foster. He is undeniably the most decorated wrestler from this class: a two Big 12 conference titles, two NCAA All-American finishes, and a NCAA title.

So did I just completely whiff on Foster’s potential impact? I don’t think so. By now you have probably read about Foster’s incredible story. Never won a state title, losing record as a freshman, now NCAA champion. I admit it’s pretty storybook and a really fun story. But whether or not Foster was a state champion didn’t even enter the equation when I compiled the redshirt impact back in 2015. He had a 3-5 record against Division I competition as a redshirt, and at the time he was competing at 165 pounds which meant he looked to be destined to be stuck behind then starter Cooper Moore.

The real kudos deservedly go to Foster, who was the man putting in the effort to where he is today, a guy that has reached the top of the podium, and the UNI staff for believing in Foster’s ability and developing an “unknown” into their first champion in almost two decades. Foster is the type of wrestler that every program wants. He’s an obvious example of how far you can go in this sport if you are willing to put in the time and work hard.