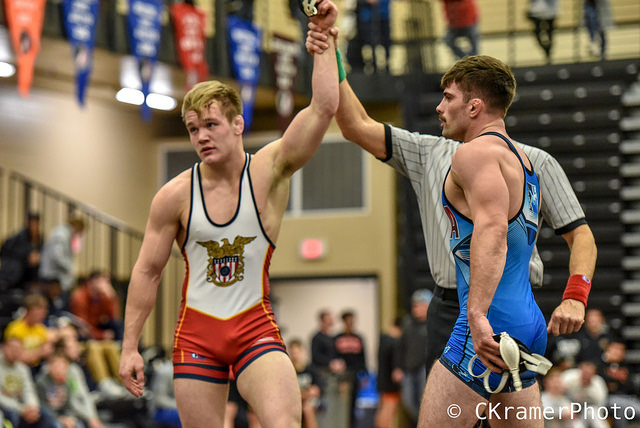 Another season is in the books which means we can already start looking ahead to next year as this crop of seniors graduate and make new openings in the lineups for Iowa, Iowa State, and Northern Iowa. In the past we have always examined the top performers across the three Division I universities and given our thoughts on the top five wrestlers who redshirts looking to make an impact  next season.

This year will be no different, although with Iowa State and UNI having bigger classes and a couple of holes to fill the honorable mention list is bigger than previous years.

The top three redshirts looking to make an impact were the easiest to identify as each of the three schools top recruit from the 2018 class performed exceptionally well in their redshirt season. The difficulty from there was slotting them in order trying to find the right balance of reflecting how well they performed this season, their likelihood of making the lineup next year, and their potential impact assuming they do ascend to starting roles by time next season rolls around.

The top spot went to Iowa’s potential star heavyweight in the making, Tony Cassioppi. His resume speaks for itself when it comes to his performance, with a 20-2 record most would be happy with that sort of production out of one of their redshirts. The real eye popping fact is Cassioppi put 14 of his opponents away by way off pinfall. His losses were to Campbell’s Jere Heino and Central Michigan’s Matt Stencel at the Midlands Championships. Heino was a round of 12 finisher at the NCAA tournament in 2018 and Stencel is a two-time MAC champion and NCAA All-American.

Also working in Cassioppi’s favor was his potential transition into the lineup next season with senior Sam Stoll graduating (though freshman Aaron Costello will still have his say) and his bonus potential that he will bring to the table if he manages to enter the lineup.

Coming in second is Iowa State legacy wrestler David Carr, who has already shown he has the ability to live up to his last name in the early going’s of his career. With a 23-1 record, it’s safe to say Carr had a successful season competing at 157 pounds unattached. His only loss of the year came in his first career match though since that lone blemish he has looked near untouchable.

The knock against Carr is that he didn’t get an opportunity to face elite Division I competition. His best opportunity would have been the Southern Scuffle, but an illness prevented the young Cyclone from taking the mat in Chattanooga. That’s not to say that Carr hasn’t been seeing some of the best wrestlers in the World as he has medaled at the Cerro Pelado International, a Senior level freestyle tournament.

He competed this past season at 157 pounds, which is the same weight that is occupied by reigning Big 12 Champion Chase Straw. He has the frame to move up to 165, which was a weight that was primarily manned by fellow true freshman Logan Schumacher this season. Carr will likely be favored no matter which weight he goes, but it remains to be seen how that will shake out as Dresser looks to improve on what was an extremely impressive 2019 campaign.

Another impressive redshirt this past season was Northern Iowa’s Michael Blockhus who compiled a 20-4 record at 141 pounds this season. As UNI’s highest rated recruit in last year’s class it should come to little surprise that he has the most impact potential for the Panthers. His season highlight no doubt came at the Midlands championships where he won four matches on the way to his fourth place finish.

Heading into next season he will be the likely favorite to take over for the since graduated Josh Alber.

Next, we head back to Iowa City where Nelson Brands completed an 18-0 season at 165 pounds. Because this weight is currently occupied by veteran Alex Marinelli it makes Brands’s potential impact that much more of a question mark on where he fits into the lineup. Previously the most likely path was viewed at 157 pounds where he could challenge Kaleb Young for the starting spot, though Young just earned All-American status at the big show.

While his varsity future remains uncertain what we do know is that he has already notched a couple of solid victories thus far. He downed multi-time NCAA qualifier Joey Gunther and also defeated Minnesota freshman Jake Allar, who was a former Fargo national champion.

The last wrestler in the top five is lightweight Kyle Biscoglia, who was another freshman that had a strong season for the Panthers. While its true the Panthers already have a talented wrestler and NCAA qualifier Jay Schwarm returning for his senior season in the purple and gold we fully expect Biscoglia to come out and push for the starting spot. Schwarm has made a living on his top wrestling, scoring 12 falls in 2019. Biscoglia is almost his counterpoint. While Schwarm can be a nightmare for wrestlers that go underneath, most of Biscoglia’s compeitition often come away frustrated with his ability to hand fight and control ties in the neutral position.

Another reason we are confident in Biscoglia’s potential is his true freshman Midlands performance where he was the seventh place medalist. Four of his wins at the Midlands came over a 2019 NCAA qualifier (Michael McGee – Old Dominion, Trey Chailfoux – Army, Drew Hildebrandt – Central Michigan, and Elijiah Oliver – Indiana). McGee was also the MAC champion at 125 pounds. Biscoglia finished the season with 24 wins and 5 losses.

One of the more difficult decisions was to not include Cyclone upperweight Joel Shaprio in the top five, but with the emergence of Sammy Colbray at 184 he finds himself in a little bit more difficult situation to find his way into the lineup next season. He put together a 26-5 record this season, including a 5-2 showing at the Southern Scuffle. With All-American Willie Miklus now graduating it creates an opening in the lineup at 197, which may be where Shapiro moves to.

The final two honorable mention wrestlers come from UNI where Cayd Lara and Drew Bennett who each deserve to be pointed out after their seasons. For Lara its a similar story to his high school teammate, Bennett in the fact that he a solid season (20-7) and next season we expect him to challenge for the starting spot in the UNI lineup. This season’s starter was Paden Moore, but the soon-to-be senior has had a rough go of staying healthy enough to compete a full season in the lineup.

That leaves Bennett who will look to be a factor next season at 133 for UNI. It’s been a tough couple years for the Panthers who have struggled to find consistency at this weight after Alber made the move to 141 pounds. Bennett will look to change that next season by challenging this year’s starter Jack Skudlarczyk.

Overall the Hawkeyes had a pretty small class in 2018, likely due to the fact that they loaded up in 2017. There were four other wrestlers that redshirted for Iowa this past season, but overall they didn’t get a lot of mat time. The two biggest names are Aaron Cashman and Jason Renteria, but of the two Cashman competed in one tournament (he went 3-1) and Renteria did not register a match.

The other two redshirts were Cam Shaver and Joe Kelly who had a combined six tournament appearances between them.

The Cyclones brought in a huge haul in 2018…like a lot. We’ve already discussed two of their redshirts, and two more true freshman competed this year – Logan Schumacher and Zane Mulder – which made them ineligible for the “redshirt list”.

A lot of the talent remaining to be discussed is still pretty raw, but there is definitely still some good potential in this group. For instance Francis Duggan could legitimately challenge for the heavyweight spot, but with NCAA qualifier Gannon Gremmel cemented as the current starter he will have his work cut out to break through.

Anthony Sherry was a fairly decorated high school wrestler coming out of Glenwood, though he will be hard pressed to beat Marcus Coleman out at 174. Hunter DeJong and Tyler Buesgens may factor into the competition to replace Willike Miklus at 197 pounds next season as well.

So far it looks like UNI’s 2018 class has the makings of being a really good one. We’ve already discussed standouts Blockhus, Biscoglia, Bennett, and Lara and who they will look to impact the roster next season. The Panthers also saw true freshman Tyrell Gordon make an impact in the starting lineup this season at 197 pounds.

What they are then left with is four additional wrestlers that redshirted this season . One of the four was inactive this season, and that was Noah Glaser at 174 pounds. The remaining trio competed fairly regularly this past season, but due to the starters ahead of them they will have a difficult time cracking into the lineup. Gable Fox was 16-7 at 149 pounds and Bryce Esmoil and John McConkey were 12-9 and 12-5 respectively at heavyweight.