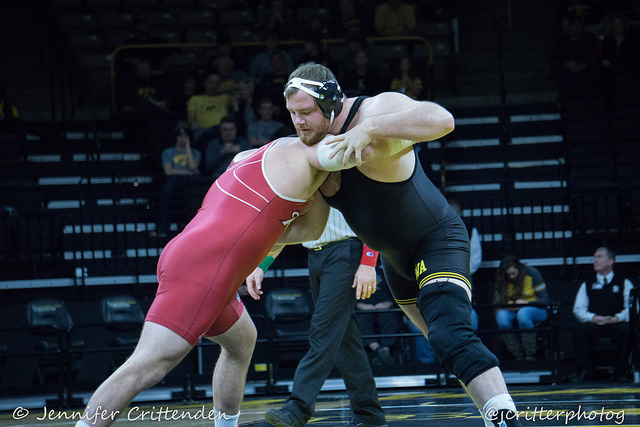 Iowa rolled to a big victory, 37-9 over Indiana on senior night in Iowa City. The Hawks were lead by six wrestlers getting into the bonus column, highlighted by falls from Spencer Lee, Pat Lugo, and Alex Marinelli.

Lee blitzed out to a ten nothing lead in the first period with a takedown and pair of four point nearfall turns. In the second period Lee picked the bottom position and was able to get out, score a takedown to Elijah Oliver’s back that ended with a fall.

It wasn’t all roses for Iowa in the dual as Indiana did manage an upset at 141. Freshman Max Murin looked to be in control of his match getting an early takedown, which he then opted to cut Kyle Lugis shortly after. Things started to fall apart in the second period when Murin gave up a takedown, which tied the match at 3-3. Murin was able to retake the lead to end the period with an escape. Then in the final period Murin started on top, gave up a flurry of points and found himself trailing 8-7. Lugis was able to get to Murin’s legs for the first time in the match, and tripped the Hawkeye on to his back for the pin.

It was then up to junior Pat Lugo to answer the bell and he did so with a first period fall, pinning Division II All-American Fernie Silva off a tilt in 1:22.

It was Jeren Glosser who filled in for regular starter Kaleb Young at 157 pounds. Glosser was defeated by former NCAA qualifier Jake Danishek, 5-1. A takedown in the first and third periods by the Hoosier were the difference, and Glosser was unable to get to his offense in the match.

Coming out of the break Marinelli made short work of Dillon Hoey earning a first period fall in the time of 2:10.

That set up our first match featuring a Hawkeye senior, with Mitch Bowman facing Jacob Covaciu at 174 pounds. Throughout most of the match neither wrestler were able to get their offense going as the only scores were escapes throughout most of regulation. Then with time winding down Bowmman got in on the legs of Covaciu and continued to put the pressure securing the takedown in the final seconds to take the match 3-1.

After failing to get on the board in the first period Cash Wilcke picked up takedown in the second and third periods, and added an escape to defeat Norman Conley, 5-2 at 184 pounds.

Jacob Warner completely controlled his match versus Jake Kleimola at 197 pounds. A pair of takedowns in the first put him up 4-1. He was able to add a reversal and takedown in the second period along with a technical violation to go up 9-2 after the second period. With a bonus win now in sight Warner poured in on in the third with a takedown clinic, making the final 16-5.

Fittingly enough the dual was ended by the other Hawkeye senior in the lineup, as Sam Stoll took on Fletcher Miller at heavyweight. The All-American took a 4-1 lead after a pair of takedowns in the first period. In the second Miller was hit for stalling twice, followed by a Stoll takedown which put the Hawk up 7-1.

Most heavyweight matches are considered boring, but this one was anything but. Stoll got a takedown in the third, followed by a Miller getting his first offensive points with a takedown of his own. Stoll was able to get out and answer with a couple more takedowns and ended with a 16-6 major decision.