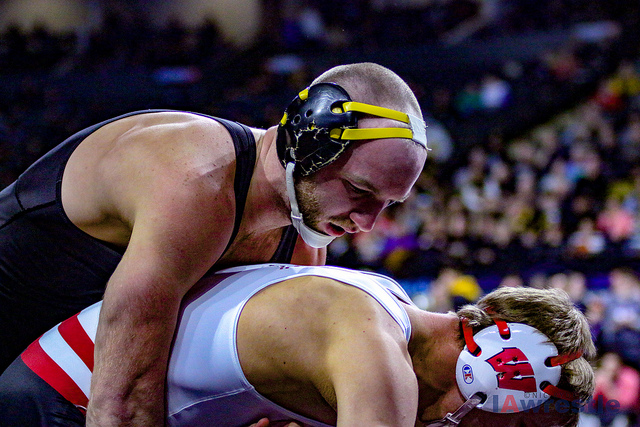 Following their XX-XX win over Indiana on senior night, the Iowa Hawkeyes will head to Wisconsin to close out their conference slate as they meet the #19 ranked Badgers for a Sunday showdown. A dual victory means the Hawks will clinch at least a share of the Big Ten dual title, as Penn State is the other undefeated team in the conference.

The Badgers notably have a new coaching staff that has the program on the upswing. The team was previously led by former Hawkeye Barry Davis, but after the Cedar Rapids native stepped down from the program last spring the university brought in former Iowa State standout Chris Bono to take over the reigns. Bono tapped longtime assistant Jon Reader to join him in Madison and plucked former Hawkeye Matt McDonough out of the Hawkeye Wrestling Club to fill out his staff.

There will be several key matches to keep an eye on in this dual, but none may be more important than the 165-pound meeting between Alex Marinelli and Evan Wick, who are ranked #2 and #3 respectively in the rankings. The duo have met twice in college with Wick winning at last year’s NCAA’s and Marinelli answering in the 2018 Midlands finals. Both wrestlers are expected to push two-time NCAA champion Vincenzo Joseph as title contenders, which means this should setup to be a very important matchup.

It will be interesting to see on how Iowa’s Max Murin will respond after losing by fall to Indiana’s Kyle Lugis on Friday night. Murin has been on the cusp of winning several big matches this season, so despite his uncharacteristic loss he should be in this match against the #9 ranked Tristan Moran.

Another key battle will occur at heavyweight where there will be a top ten meeting between #5 Sam Stoll and #10 Trent Hilger. Stoll has looked great since suffering his upset loss to Nebraska’s David Jensen several weeks ago, including his multi-takedown performance on senior night earlier this weekend.

They may be unranked, but Iowa should be wary of their opponents at 184 and 197 pounds respectively. At 184 pounds Cash Wilcke may carry a 3-0 record against his opponent Mason Reinhardt, though two of those matches were decided by a two point margin. Freshman Jacob Warner will take on Beau Breske, who is a recent transfer out of Nebraska for the Badgers. In their last meeting Warner won 5-3 over Breske at the Midlands championships.

The dual will also hold a special significance for both teams, with the Badgers honoring one the late Eli Stickley at the dual, who lost his life in a car accident in 2018. Eli’s twin sister Moriah is a manager for the Iowa program and is engaged to Marinelli, who was a teammate of Eli on their high school team, St. Paris Graham.