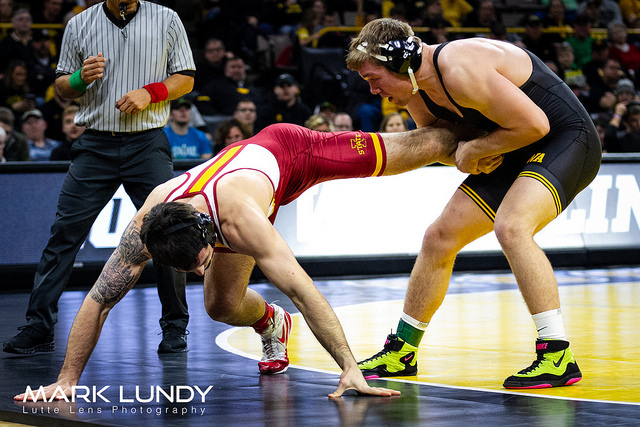 For the third time in 2019 the Iowa Hawkeyes will hit the road in search of another Big Ten victory against one of their border rivals. This weekend it will be none other than the #9 ranked Nebraska Cornhuskers who feature a total of seven top 20 ranked wrestlers, including five of those in the top ten.

Last weekend Iowa had a double dual road trip in Illinois facing the Fighting Illini on Friday night followed by Northwestern on Sunday afternoon. The Hawkeyes came home with two victories winning by the combined margin of 63-15 against their eastern neighbors. Iowa was led by sophomore Alex Marinelli at 165 pounds, who scored ten of the Hawkeyes 63 dual points on the weekend. The All-American is now 15-0 on the season, and has won by bonus in every dual he’s appeared in this season.

Nebraska comes into this weekend’s meeting having won two of their last three duals with that one loss coming to top ranked Penn State. The Huskers will have the opportunity to pick up one more win prior to their Sunday showdown with the Hawkeyes, as they are scheduled to take on Rutgers Friday night, also on their home mat.

The strength of the Husker lineup is without a doubt their upperweights. All five of their top ten ranked wrestlers appear in the lineup from 157 pounds through 197 pounds. With Iowa featuring three top ten ranked wrestles of their own in that stretch, it should come to little surprise that those rate as the most anticipated matchups and should have the biggest impact on the outcome of the dual team score.

It is up for debate on what is the top matchup this weekend, but our argument is the 165-pound bout between #2 Marielli and #6 Isaiah White. This match has a lot of factor’s in its favor to make it the top one to watch. As mentioned above Marinelli is currently undefeated and has been the most consistent Hawkeye in duals, winning every appearance by bonus. With the Big Ten also featuring four wrestlers ranked in the nation’s top six, this match could also have some implications for seeding decisions made in March. Perfect record, dual race, postseason implications, book it as our top match.

The second big match to watch will be a battle of big men as Iowa freshman Jacob Warner finds himself just behind #5 Eric Schultz in The Open Mat’s rankings. This match will be Warner’s biggest test of the season going back to his debut against Iowa State’s Willie Miklus. Since his Midlands stumble Warner has looked solid in his last four dual appearances, but a win over Schultz could be the starting point for the freshman’s season to really take off.

The final meeting between two top ten ranked opponents is at 157 pounds where #7 Kaleb Young is slated to meet #2 Tyler Berger. Last weekend we saw Tom Brands opt to rest Young rather than have him face the #3 ranked Ryan Deakin. That doesn’t look to be the case this weekend, as Young was the lone wrestler listed at 157 pounds for this weekend’s matchup with the #2 ranked Tyler Berger. Young has had a strong start to his sophomore campaign, but he has so far failed to crack the upper echelon of 157, but this weekend presents him with another chance at doing so.

Another young Hawkeye enjoying some early season success is 141-pound redshirt freshman Max Murin, who will be facing the #17 ranked Chad Red. Last weekend Murin got his first opportunity at a top five opponent and came within seconds of beating Illinois’ Mikey Carr. While Murin enters this weekend’s dual as a slight favorite over his opponent, it will be an important match to win as these two are currently in the same tier among the Big Ten competitors. A head-to-head win in this dual will be important come seeding time in March.

Like Murin, last weekend also saw Cash Wilcke get an opportunity to face a top five wrestler at his weight class. Wilcke dropped a 4-1 decision to then #2 Emery Parker, but he then rebounded with a win by fall against Northwestern two days later. This weekend Wilcke will once again be tested with a top tier wrestler facing #4 Taylor Venz. Known for his top wrestling, Venz’s last match out was a win by fall over Parker. Wilcke will likely be wary about picking bottom against his Husker opponent, which places a lot of empahsis on what Wilcke can get done on his feet in this dual.

The remaining ranked matchup is between a pair of Pennsylvania natives, #2 Spencer Lee and #15 Zeke Moisey at 125 pounds. Lee was dominant his last time out, pinning his ranked opponent from Illinois in the third period, though Moisey’s resume is a bit more polished than Travis Piotrowski. Lee should be favored by bonus in this weekend’s contest.

This dual will likely have a lot of emphasis on the “lopsided matches” (i.e. the one’s where only one wrestler is ranked), which Iowa holds the advantage two to one. Both Austin DeSanto and Sam Stoll are more than capable of picking up bonus wins this weekend, which will be important for this dual.