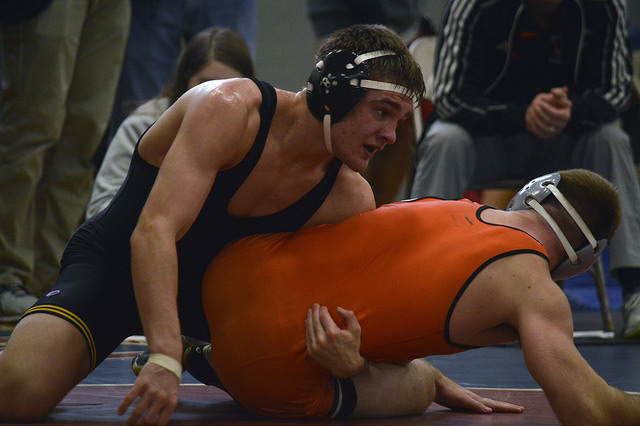 The Iowa Hawkeyes cruised to a big 32-7 victory over the Northwestern Wildcats on Sunday afternoon. The dual started off slow for Iowa, dropping two of the first five matches, and seeing only two of their wrestlers manage to score a takedown. Things ratcheted up in the second half of the dual when the Hawks swept the Wildcats over the last five weights, including three wins by bonus.

We did not get our much anticipated bout between the nation’s top two ranked wrestlers at 125 pounds. Instead it was Perez Perez who took the mat for the Hawkeyes against #1 Sebastian Rivera. The Hawkeye backup did a good job fighting off several offensive attempts by Rivera, but after Perez took down in the third that is where the nation’s top ranked wrestler was able to extend his lead. A pair of near fall turns helped increase Rivera’s margin to a major decision 11-1.

After getting the night off against Illinois the #4 ranked Austin DeSanto made his return to the Iowa lineup to face Colin Valdiviez at 133 pounds. DeSanto wasted little time in pouring on the points picking up four takedowns in the first period. DeSanto continued to push the pace in the second adding three more takedowns and a stalling point to push his lead to 15-7 heading to the final period. DeSanto wasn’t able to widen the gap beyond that and wound up finishing with the 18-8 major decision win.

Things were rather slow at 149 pounds where #12 Pat Lugo needed overtime to beat Yayha Thomas. Both wrestlers traded escapes to end regulation tied 1-1. After a scoreless sudden victory period, the match headed to the rideout period. Lugo go out from underneath quickly to re-take the lead 2-1, and then successfully rode Thomas in the next thirty seconds for the win.

The dual’s other ranked matchup was scheduled to occur at 157 pounds, but instead of usual starter Kaleb Young taking the mat to face #3 Ryan Deakin, Jeren Glosser got an opportunity to start. Throughout most of the match Glosser was able to keep the score within a takedown, but while the Hawk was in desperation mode late he surrendered another takedown to go down, 6-1.

Coming out of the break Alex Marinelli picked things up for the Hawkeyes. The Bull built his lead early with three first period takedowns and one in each of the second and third periods. Morland nearly managed to avoid giving up a major decision by scoring an escape with less than 30 seconds left, but a hands to the face technical violation gave Marinelli the 12-4 win.

Southeast Polk native Keegan Shaw made his second appearance at 174 pounds this time taking on Johnny Sebastian. After giving up the match’s first score to Sebastian, Shaw stormed out to a 6-2 lead midway through the second period thanks to a pair of takedowns and escapes. Two more takedowns, one in each of the second and third periods, improved his finish to a 11-6 win.

There wasn’t a lot of scoring in the 184-pound matchup, but that was due to junior Cash Wilcke’s quick work. With a takedown in the opening minute Wilcke was able to work Brendan Devine over to his back for the fall in 1:20.

In the final match of the afternoon it was top ranked Sam Stoll looking to close things out for his team against Conan Jennings. The match eventually went to Stoll in the third period as Jenning was forced to injury default out of the match. Prior to the match ending, Stoll was leading by eight points.