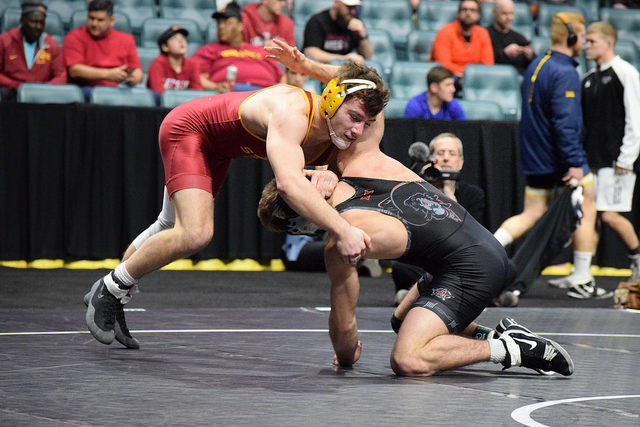 The dual started at 157 pounds and a Cyclone victory. Chase Straw was pitted against Wyatt Sheets. Straw struck first, earning a first-period takedown off a single-leg attack. At the end of second period, they were tied at 2-2. Straw began the third with an escape and held off Sheets to win the match 3-2.

The Cyclones dropped matches at 165, 174 and 184 pounds before Willie Miklus got the Cardinal and Gold back on track.

At 197 pounds, No. 6 Willie Miklus jumped out to a 4-0 lead over No. 10 Dakota Geer after one period. The Cowboy chipped away at Miklus’ lead, securing two takedowns to eventually tie the match at 6-6. Miklus started the third period with an escape and secured the 9-6 victory with a takedown at the end of the third period.

A rematch from the Southern Scuffle finals lived up to the hype. No. 9 Austin Gomez squared off with No. 3 Dayton Fix. Gomez earned the first takedown of the match, but Fix fired back. Gomez was called for locked hands in the third and Fix reversed him following that. Gomez got a late escape to tie the match at 4-4. He fired off a single leg attack late in the match but was unable to bring Fix to the mat. Fix took the match 5-4 on riding time.

No. 14 Ian Parker earned his second victory over a top-15 opponent on the weekend. No. 13 Kaid Brock notched the first takedown of the match, but Parker got to his feet and finished the first on top, 3-2. At the end of two periods, the match was tied at 3-3. Parker scored an escape in the third and iced away the win with a takedown to take it by 6-3 decision.

No. 12 Jarrett Degen won his match by injury default over Boo Lewallen to finish the dual.

Next Up
The Cyclones return to Ames for a pair of Big 12 contests next weekend. The Cyclones are set to host South Dakota State on Friday night at 7 p.m and Utah Valley on Sunday at 2 p.m. Both of those duals will be available on Cyclones.TV and FloWrestling.