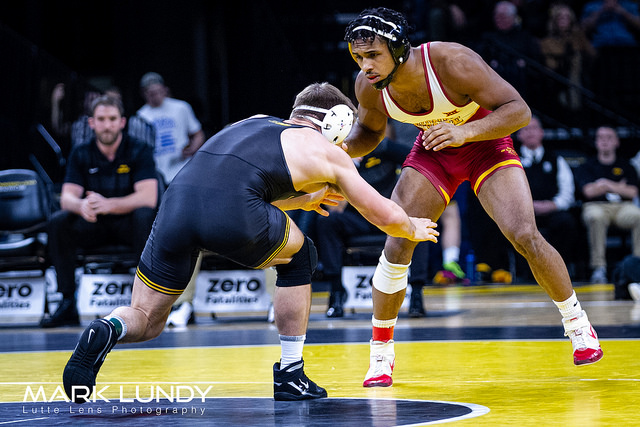 Forty-one hours and 552 miles after the Cyclones win against Oklahoma; they are in Stillwater for a showdown with the Cowboys! Oklahoma State is the second best measuring stick in the country.

Iowa State comes in as the favorite at two weights, 141 and 197 pounds. Oklahoma State’s whole lineup is ranked in the top twenty, if Chandler Rogers gets the go. As we all witnessed in Iowa City, being an underdog doesn’t phase this group. Ian Parker, Marcus Coleman, and Sammy Colbray all bring an undefeated dual record to Stillwater on Sunday.

I think we can all agree that we’re ready for another installment of No. 10 Austin Gomez vs. No. 3 Daton Fix. In the finals of the Southern Scuffle, Fix came out on top 6-3. Gomez will certainly be looking for redemption, and to quiet the crowd at Gallagher-Iba Arena. To quote Austin, “Scared money don’t make money!”Fix comes in to Sunday’s contest after suffering his first loss of the season last time out.

No. 10 Ian Parker comes into Sunday’s match with No. 12 Kaid Brock on a hot streak. With seven seconds left in sudden victory, Parker was awarded a stall point to take the win over No. 15 Dom Demas Friday night 4-3.

So great to see true freshman, Logan Schumacher notch his second win Friday night. When asked about Logan’s performance this was Coach Dressers reply, “I think we found us one there. He’s gonna win some matches at Iowa State before he leaves here.”

While it’s not advised to spot your opponent twelve points, it does send almost 4,000 fans into absolute pandemonium when you come back and win 17-15, as No. 19 Marcus Coleman did Friday night. He scored thirteen points in the third period to earn win number nineteen. He’ll have a tough test in No. 5 Joseph Smith in Stillwater.

At the Southern Scuffle, No. 18 Sammy Colbray lost a tough 6-3 decision to No. 10 Jacobe Smith. Since then, he’s been on a five match win streak. Four of them being of the bonus point variety, one fall, one tech fall, and two major decisions.

The first meeting this year between No. 8 Willie Miklus and No. 10 Dakota Geer will be another must see. It really looks like Willie is soaking it all in, in his last year of college wrestling. Giving kids high fives on his way to the mat Friday night was so cool to see.