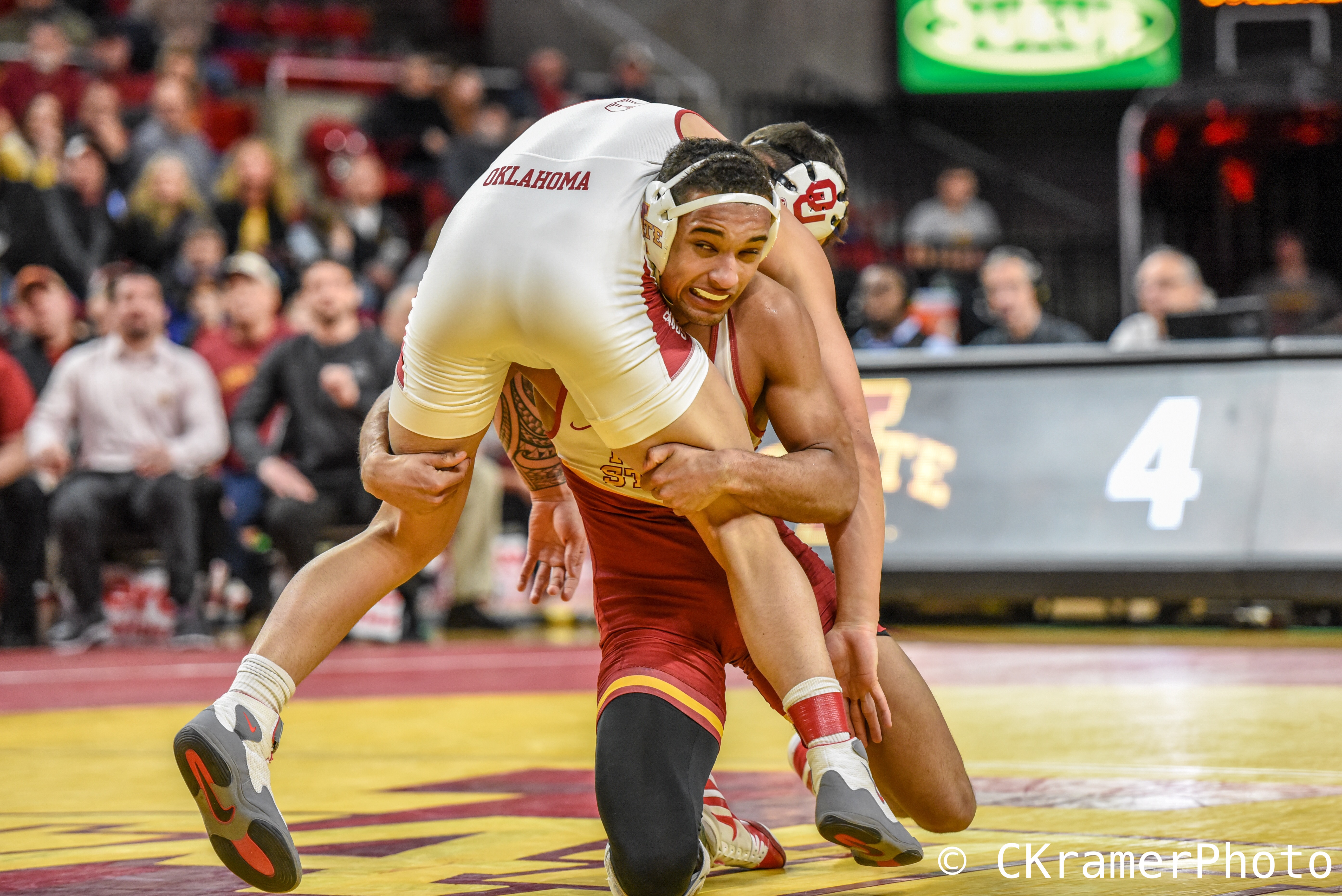 The Cyclones won eight of 10 matches and increased their dual winning streak to six matches, the best string since 2010-11.

Alex Mackall got the Cyclones on the board first with a 10-4 win over Christian Moody at 125 pounds. Mackall jumped out to an early 6-0 lead in the first period with a takedown and a four-point near fall and cruised the rest of the way.

Austin Gomez improved to 14-2 by defeating Tony Madrigal, 8-2 in the 133-pound match. Down 2-0 to begin the second period, Gomez rode Madrigal the entire frame and picked up a pair of four-point near falls along the way.

The 141-pound match featured two ranked wrestlers in No. 14 Ian Parker and No. 11 Dom Demas. Demas led 3-1 in the third period until Parker got a huge takedown with 53 seconds left. Parker then claimed the victory (4-3) when Demas received his second stall warning with seven seconds remaining in the sudden victory period.

Logan Schumacher registered a 5-0 decision over Hayden Hansen at 165 pounds behind 2:50 of riding time to get the Cyclones back on track.

The 174-pound match was epic and downright crazy. ISU’s Marcus Coleman gave up a first-period takedown to Anthony Mantanona, who proceeded to ride out Coleman and record a trio of four-point near falls to mount what appeared to be an insurmountable 12-0 lead after period one.

Coleman started to chip away, getting a reversal and takedown in the second period to cut the deficit to 12-4. Coleman then produced an amazing third period with four takedowns and a pair of two-point near falls. Coleman was down 14-13 with 31 seconds remaining, but got a takedown at the 14-second mark and followed it with a two-point near fall to close out the match and a 17-15 victory.

Coleman tallied an incredible 13 points in the third period to improve to 19-6.

Sam Colbray registered the only bonus points in the match with a 14-4 major decision against Kayne MacCallum at 184 pounds. Colbray had three takedowns and a reversal in the match.

Willie Miklus and Gannon Gremmel capped off the Cyclone victory with a pair of decisions. MIklus defeated Jake Woodley 6-5 on 3:23 of riding time. Gremmel tallied two takedowns, an escape and a point for riding time in his 6-1 victory over Jake Boyd.

Next Up
Next up for the Cyclones is a matchup at No. 3 Oklahoma State on Sunday. First match is at 2 p.m.