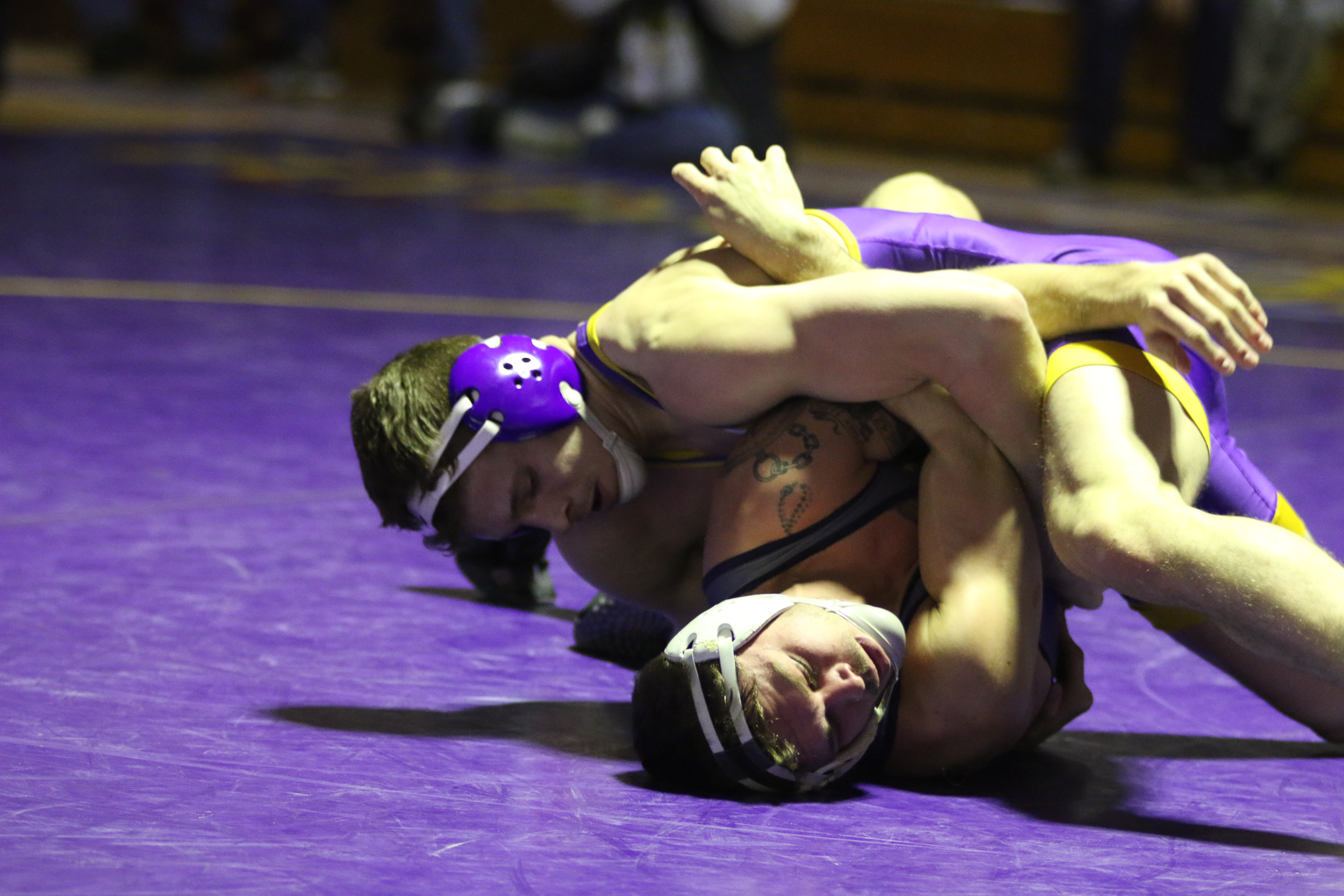 The Northern Iowa Panthers were perfect through seven matches, and took eight of ten from the Northern Colorado Bears in a Big 12 conference dual Friday night. UNI stayed undefeated and moves to 4-4 overall and 4-0 in conference duals with the victory.

Jay Schwarm started things off with some fireworks as he took down #19 Rico Montoya and immidently turned him for a four point nearfall, then locked up and cradle and appeared to have a fall, but instead was awarded a two point nearfall. UNI Head Coach Doug Schwab lost a team point for control of the mat area when he tried to ask official Matt Zeitz about the two point nearfall.

Schwarm didn’t miss his opportunity in the second though, choosing the top position to start things out and then locking up another cradle for the pinfall win in 4:10.

The newly ranked number three wrestler in the land had a bit of a slow start against Chris Sandoval, trailing 2-1 going into the second. The Panther found another gear though in the second and third, scoring three more takedowns from neutral to win 9-6. The win is Alber’s 100th victory as a Panther, and he joins 19 others on that list at UNI.

Max Thomsen used a punishing ride in all three periods, securing over four minutes of riding time before the end of the second period. He used a series of tilts in the first and third to push his lead and secure the technical fall.

At 157 pounds the Panthers stayed perfect as Paden Moore made his dual debut on the year. Moore came out and scored a quick takedown, and used a third period takedown to secure the win, 5-4, over Jordan Robinson.

If fans weren’t in their seats right after the break, they probably missed a match. Bryce Steiert didn’t mess around coming out of the intermission, he scored a quick takedown and immediately went for the fall, securing it just :59 seconds into the first period.

Taylor Lujan, not to be outdone by his teammates Skudlarczyk and Thomsen, also won by tech fall against Seth Bogulski. Lujan nearly had a fall faster than Steiert, but he settled for a four point nearfall and a ten point first period. He scored eight more points in the third period alone on his way to the win.

Carter Isley made his return to the mat after having suffered a knee injury at the UNI Open a couple of months ago in a big way. The heavyweight scored a takedown and then ran Robert Winters over for the pinfall win.

Austin Yant saw his first dual action of the season but was unable to come away with the win. Northern Colorado’s Dalton Robertson was able to come back from a 2-0 hole after the first period with a rideout in the second and a takedown of his own with three seconds left in the period. Yant was hit for stalling once each in the second and third period.

At 197 pounds Northern Colorado saw one of their two ranked wrestlers, Jacob Seely, secured a 8-2 win over Tyrell Gordon. Gordon never got to his offense, and Seely used an effective ride in the second and third periods to keep Gordon away.

The Panthers are next in action on Sunday at 2PM in the West Gym.