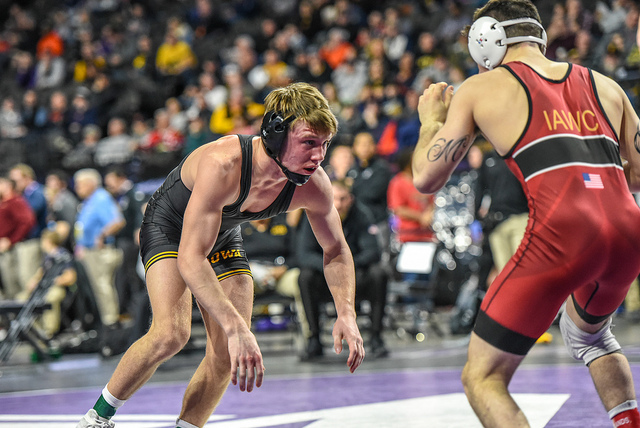 Coming off a 30-6 beat down of Rutgers on their home mat, the Hawkeyes return to the road life as they face a double dual road trip in the state of Illinois. On Friday night the Hawks will face #19 Illinois at 8 PM in a dual that will be featured on TV’s Big Ten Network. The Hawks then turn around and wrestle again on Sunday afternoon where they will be back in Evanston for a dual against Northwestern.

Last weekend’s performance will be a tough one for the Hawkeyes to top, taking eight of ten matches from a top 15 ranked team. That of course includes Austin DeSanto’s upset of the formerly #3 ranked Nick Suriano, who’s last second takedown continued what has been a strong start to the 2019 year for the sophomore.

Last weekend’s dual against Rutgers also marked the return of top ranked heavyweight Sam Stoll to the lineup. So far this season Stoll has now featured in two duals, and he competed in two matches at the Midlands.

The first dual will feature five top 20 matchups among the ten bouts, with the highlight matchup being at 141 pounds. Iowa’s redshirt freshman Max Murin is off to a strong start to his career, but this weekend could have a major impact on his postseason seeds if all goes well. Illinois’ Mike Carr is currently ranked #5 in the nation, which is second in the Big Ten. The pair have met on one other occasion in their careers at the 2017 Midlands. The match went to Carr, 3-2.

In the familiar faces department we have Joey Gunther who will match up against former teammate Alex Marinelli this weekend at 165 pounds. Gunther was a two-time NCAA qualifier for Iowa in 2017 and 2018. He made the decision to transfer back to his home state last summer where he has made an immediate impact on the Illini lineup.

Another big matchup will occur at 184 pounds where the Illini’s #2 ranked Emery Parker will look to defend his home mat against the #11Cash Wilcke. Since dropping to 184 pounds Wilcke has put together a 12-2 record, but is still seeking his first marquee victory at his new weight class.

After making his dual lineup return last weekend many fans will be hoping to see Stoll take the mat once again this weekend. His Friday night opponent Deuce Rachel may not be ranked, but many remember the last time the duo clashed during the teams’ dual a season ago. With Iowa trailing Illinois in the team score, the Hawkeyes could only secure a team victory if Stoll managed to pin Rachel. Instead of playing it safe Rachel went for all the marbles by attempting to toss Stoll to his back for an upset. Stoll, who is a World medalist in Greco-Roman wrestling was able to counter, and wound up pinning Rachel. That led Iowa to a 18-17 victory.

Among other matchups in this dual both Spencer Lee and Austin DeSanto are currently 1-0 against their projected opponents Travis Piotrowski and Dylan Duncan respectively.

It will then be a short turnaround for the Hawks wrestling two days later against a tough Northwestern team who despite being 3-6 overall, the Wildcats did manage to upend Wisconsin this past weekend. Unlike the Illini, Northwestern doesn’t feature as many ranked wrestlers, but those who are ranked rate among the best in the country.

Of course I am talking about Sebastian Rivera and Ryan Deakin, who are both ranked in the top three nationally. Both wrestlers were Midlands Champions last month downing their Hawkeye counterparts in the finals.

Naturally all eyes will be on the Lee-Rivera match at 125 pounds, as the two wrestlers will battle for the nation’s top spot in the rankings. Lee currently supports a 2-1 record all-time against Rivera, though many wonder if Rivera’s Midlands performance could perhaps signal a new budding rivalry at a weight that many expected Lee to control. We may get to see this match several more times this season and so far each installment of the series has delivered on excitement.

The other big match is the Young-Deakin rematch at 157 pounds, but unlike the dual’s other top ten meeting, this one will not be considered a toss up. Last time out Deakin controlled his match against Young, but an important thing to watch for may be to see what adjustments the Hawkeye has been able to make since December that will allow him to close the gap.