Iowa vs Illinois Play by Play 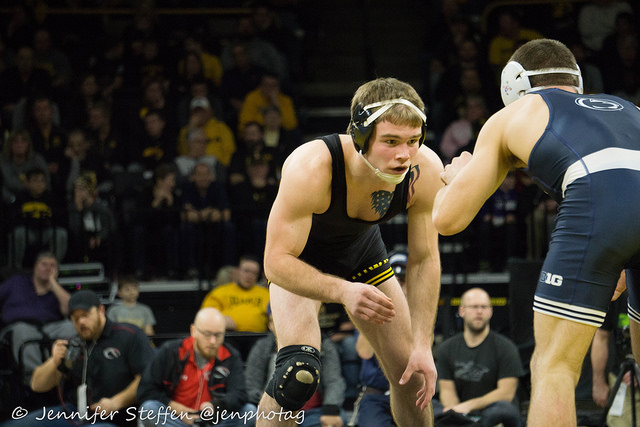 1st: Stalemate about a minute in, nether able to fight through hand control. Piotrowski scores first, he was able to slip down to the leg and caught Stickley. Stickley tries to come up but they go out of bounds. Off the restart Piotrowski riding and bellies Stickley out. Looks like he’s got a leg in. He finishes the ride out, 1:10 RT.

3rd: Stickley starts down, Piotrowski puts the leg in and Stickley tries to catch it but gets flattened out instead. Piotrowski goes over 1:00 RT with 1:18 to go. Stick finally gets out with :33 to go and goes right in on a shot but can’t catch the leg so they go back up to neutral. Piotrowski able to hang on.

1st: Highlight of the first minute: Extended shot for Duncan that Laux counters with some offense of his own, goes now where. One minute left and Duncan in on a shot. He’s on his knees trying to come out the back door, Laux gives up 2 NF in the danger position. Trailing 2-0. Correction this was a takedown but the announcer called nearfall.

2nd: Duncan starts down and is up and out. Laux takes a low ankle show and is trying to come around, the ref rules potentially dangerous for Laux knee. Duncan looking for more points, gets called potentially dangerous again. Inside single shot for Duncan, Laux now in a front headlock trying to go behind, but Duncan comes up to his feet. Period ends Laux down 3-0

3rd: Laux starts on bottom and gets out after :30. Laux takes a shot but Duncan gets him extended. He break Laux grip and comes around for a takedown. Duncan finishes the rideout.

1st: Straight on double off the whistle for Carr and he scores an early takedown. Turk comes out for an escape after :26. Carr gets in on a single and brings it up to his feet, he trips Turk for another takedown. Turk gets another escape with 1:48 to go, Carr with :44 RT. Another straight on double attempt by Carr this time Turk fights out of it. Turk tries a shot but can’t clear the hands, now Carr in on another single he brings to his feet, he’s able to catch the far leg for another takedown. Period ends 6-2 Carr

2nd: Turk starts down and gets out in :12, cuts the score to 6-3 now. With short time in the period Turk goes desperation double off the whistle and able to power through for a score. 6-5 Carr lead.

3rd: Carr starts down and gets an escape, important thing is he erased RT. Stopping for blood time. Turk starting to open it up with under a minute to go, looking to push the pace. Can’t get anything going, Carr warned for stalling with :03 left.

1st: Scoreless first period. Neither guy with a committed offense until about :30 left Sorensen tried a snap go behind.

2nd: Barone starts down. He’s up and out in :05. Rest of the period is scoreless.

3rd: Sorensen is up and out in :05, now he gets in on a single and he brings it up to his feet, trying to trip and gets the takedown on the edge. Looks like Sorensen might have said a little something to Barone after they went out too. Barone comes to his feet, Sorensen unable to return in time and gets hit with stalling.

1st: Kemerer in on a single with his head on the inside, he finishes for a takedown. Kemerer cuts with just over a minute to go. Kemerer looking for more, but Langenderfer able to defend. Period ends 2-1 Kem

2nd: Kemerer starts down and Langenderfer with quite of few returns out of bounds, Kemerer finally gets out with under a minute to go and now has a 3-1 lead. Period ends.

3rd: Langenderfer starts down and Kemerer rides him the whole period.

1st: Young going for some early offense, IMar able to slip behind and scores a go behind takedown early. Young out in :11, comes right back to his offense and gets a single. Picks it up of the mat and looking to finish, but IMar able to funk out and go behind for a takedown. Young is out for an escape. IMar drops to a single, Young able to get his leg back, now IMar scores on a double to end the period. 6-2 IMar w/ 1:03 RT.

2nd: Young starts down and gets his escape in :09. IMar with another single leg finish for two more. Young gets an escape and IMar adds a takedown on the edge, 10-4 now. Escape Young, IMar gets a little careless on a shot and Young counters into a single of his own. IMar able to come around and locks up a cradle for another takedown. 12-5 lead for IMar.

3rd: IMar starts down comes to his feet and standing roll to his escape. IMar finishes a go behind and Young gets an escape, another quick takedown for Imar. Young escape, takedown IMar. Escape Young, takedown IMar, gets a quick 2NF count.

1st: Scoreless period. Not a lot of action to speak of. Gunther tried a shot with :18 left but never really got to the legs.

2nd: Gunther starts down. he’s up and out in :06 for the first score. Snap on the edge and Gunther drops and picks up the leg, he tries to trip Riojas, but he gets his leg back. Riojas warned for stalling for backing out of the circle. Gunther drops down and catches both ankles in a lace for a takedown, switch attempt by Riojas, but Gunther fights it off for the rideout. Crowd appreciating the action by Gunther at the end of the period.

3rd: Riojas, he comes up and Gunther lets him go. Gunther in on a leg on the edge, but unable to score. Riojas hit with stalling again for backing away. Gunther comes to the side picks up the leg and finishes for another takedown

2nd: Parker starts down. Escape Parker in :14. Maybe a duck for Bowman? Either way he scores a takedown with just under a minute left in the period. Parker to his feet and gets his escape. Tied 2-2. Shot Parker, re-shot Bowman, no score but he’s getting after it.

3rd: Bowman starts down comes up to his feet and is out, comes right to his offense, Parker able to score on a re-attack single. Crowd trying to urge Bowman to get up and out. Stall warning on Parker riding on top. Bowman tries a roll doesn’t get out, now Parker working a half with the legs in trying to get some near fall. Bowman bellies out.

1st: Cash tries a shot with 1:15 remaining about the only action this far in, but doesn’t score. Cash drops down and picks up an ankle unable to finish, blood time for Lee. Period ends scoreless.

2nd: Cash starts on bottom, spins around and picks up Lee’s leg. Tries to finish, but Lee gets away. Cash still gets his escape to lead 1-0. Cash shoots in again low ankle and Lee just about scored on a go behind, Cash counters and they are back on their feet. 1-0 Cash lead.

3rd: Lee starts down, comes to his feet, Wilcke rides him out of bounds. Lee gets his escape. RT not a factor. Looks like we are headed to SV.

SV1: Lee takes a shot but doesn’t touch Cash’s legs, now he’s in on a single, but Lee breaks his grip back to their feet. Duck under Wilcke for the win

1st: Stoll has a bear hug, Rachal breaks it. Stoll wants the body lock real bad, and he tosses him to his back for the fall.