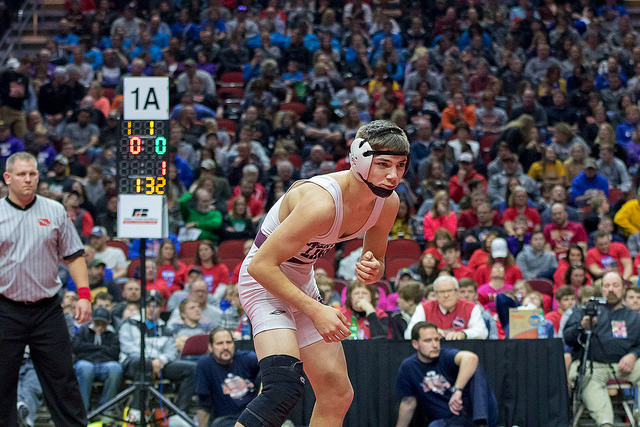 It’s been a happy New Year for Coe College as the Division III power has added two standouts in the class of 2019 in Riley Wright of Denver and Brady Henderson of North Linn. Both wrestlers are Class 1A standouts and are expected to be in the hunt for a state title next month in Wells Fargo Arena.

I’m very excited to announce that I have committed to Coe College to continue my academic and athletic career! 🔴🐤 pic.twitter.com/0RpQrZu6Ig

As a freshman Wright had a standout fourth place finish in Class 2A, before finishing third a year later with his only loss that year being to the eventual state champion. A year ago his high school program split away from Tripoli, and Wright took him a fifth place finish in his first showing in Class 1A. He is currently ranked #2 at 138 pounds, behind the nationally ranked Cobe Siebreicht of Lisbon and with his team currently ranked second in IAwrestle’s team rankings, Wright figures to play a big role in the 1A team race. Wright projects at 141/149 pounds.

I am extremely excited and proud to announce that I will be continuing my academic and athletic career at Coe College! I would like to thank everyone who has helped me to get to this point and GO KOHAWKS! 💪🏻 pic.twitter.com/jXvXkLtJ4N

Brady also looks to join his brother Brock, who is currently ranked 10th in nation at 133 pounds for Coe College.