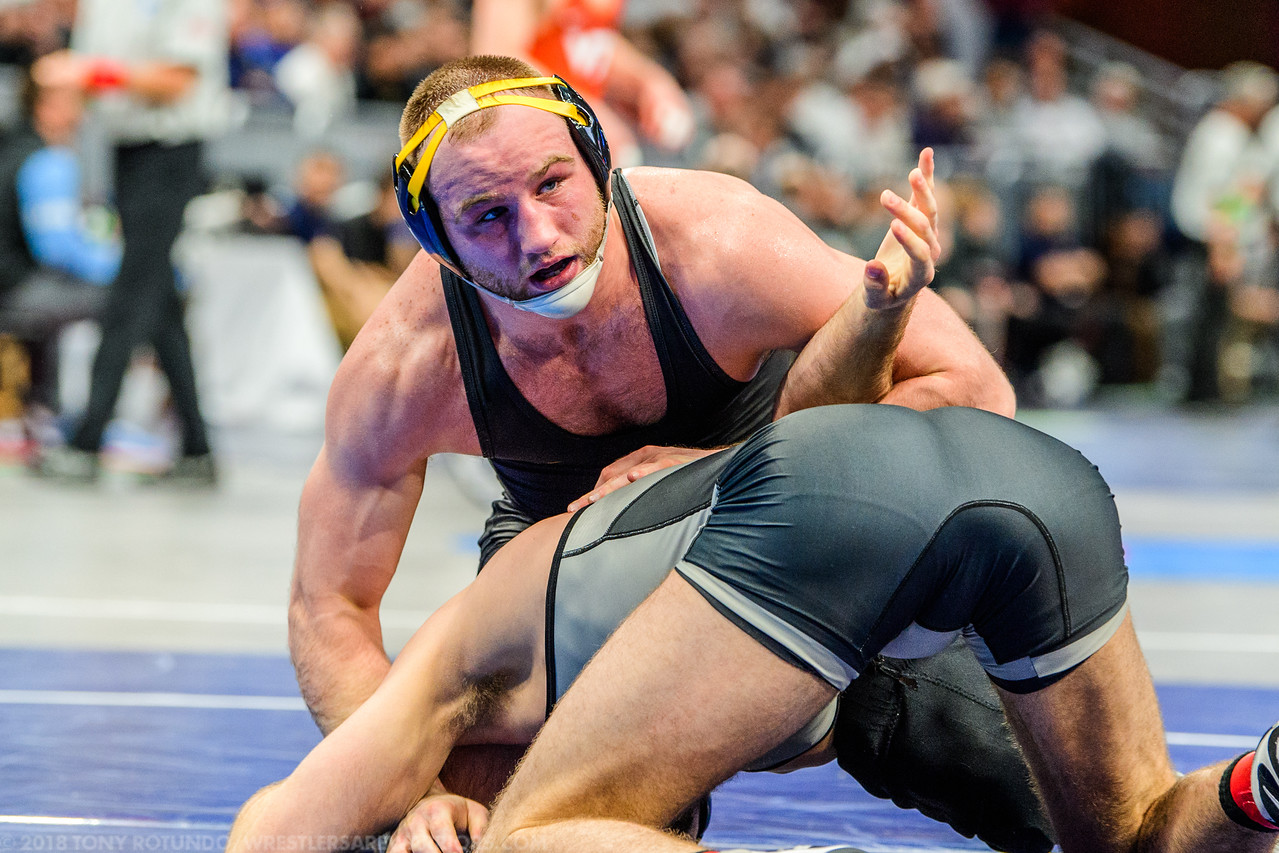 The Iowa Hawkeyes continued a now 15 match winning streak against their instate rivals the Cyclones of Iowa State. It was a very tight dual with the Hawkeyes margin for error at a razor thin level. In the end the Hawkeyes scored two key bonus point victories which was enough to keep their winning streak alive. Iowa head coach Tom Brands remains undefeated against his rival.

The dual lead off with one of the marquee meetings between Iowa freshman Max Murin and Iowa State sophomore Ian Parker. After a scoreless first it was a Murin dominated second period with the Hawkeye scoring a reversal and takedown to take a 4-1 lead. In the final period Parker staged his comeback with an escape, penalty point, and late takedown to steal the match in Carver-Hawkeye.

Making his return to the lineup was junior Pat Lugo who faced off against Cyclone sophomore Jarrett Degen at 149 pounds. This was one of three ranked head-to-head meetings and this one went to the upset minded Cyclones. Lugo managed a first period takedown but Degen was able to get out for an escape and then added another escape in the second to tie the match. In the third Lugo was able to get an escape of his own but a Degen takedown followed by Lugo escape sent things to overtime.

After a scoreless sudden victory period the wrestlers headed to the tiebreaks where the match was ultimately decided. Degen was able to ride Lugo out in the first 30 second period, and in the second he scored an escape and takedown to end the match, 7-4. The loss prevented Lugo from earning his first victory in his home arena.

The Hawkeyes were finally able to enter the win column after the 157-pound bout when Kaleb Young was able to defeat Chase Straw by a score of 8-3. It was a match that was entirely controlled by Young as he picked up takedowns in each period and totaled over three minutes of riding time.

The Hawkeyes then took the lead in the team score after 165 pounds with Alex Marinelli earning a second period fall against Brady Jennings. Marinelli built a huge first period lead scoring 12 points in the first period which already had the Hawkeye in bonus territory early in the match. In the second Marinelli was able to whip Jennings over to close out the match early.

Moving the dual’s midway point was an odd turn of events as Myles Wilson was staging an upset of his own, leading Marcus Coleman 4-3 after the first period. While walking around the center of the mat between periods Wilson’s leg buckled and after discussion with his trainers Wilson had to injury default out of the match.

The result put Iowa State back in front of the Hawkeyes in the team score, 12-9 at the midway mark.

There was plenty of action in the first period as each wrestler picked up a takedown and escape to make the match 3-3 heading into the second period. Wilcke won the second period with an escape which gave him a 4-3 lead to begin the third. Colbray knotted things once again early in the final period with another escape, but Wilcke shot a nice low ankle double leg which caught the Cyclone flatfooted. With short time remaining in the bout Colbray continued to pursue the winning score as he wound up getting a takedown off a Wilcke shot at the end of the match.

Things got wild in the 197-pound bout between Iowa’s Jacob Warner and Iowa State’s Willie Miklus as the officials had the review the end of the match to confirm the outcome, but in the end the Hawkeye freshman scored his first career win inside Carver-Hawkeye. Trailing late in the third period Miklus was able to come around Warner for a takedown to go up 4-3. With less than 30 seconds remaining Miklus attempted to cradle and turn Warner over to his back, but Warner kicked out and spun around for a reversal to win, 5-4.

In a surprise move at heavyweight Brands pulled out his big gun, sending out the #1 ranked Sam Stoll to face Cyclone sophomore Gannon Gremmel. The nation’s top ranked wrestler picked up a first period takedown and proceeded to ride Gremmel for a majority of the match. Stoll ended with over four minutes of riding time in route to his 5-1 victory.

With the dual once again tied, this time at 15 points a piece Iowa turned to their other #1 ranked wrestler to put the Hawkeyes back out front. Spencer Lee blitzed out to his typical early first period lead building a 10-0 lead against Alex Mackall. From there things turn to the unusual as Lee was unable to continue his scoring barrage and Makall worked his way bac into the match. Lee ended with enough for a major decision with the final score, 13-4.

The dual now on the line for both wrestlers each team turned to their Austin to try and bring home the win. The Hawkeyes featured #9 DeSanto versus Iowa State’s unranked freshman Gomez. It seems fitting that one of the duals most anticipated matchups would be the bout to close this rivalry dual and the match definitely delivered on action.

The wrestlers traded scores throughout the entire match, with things even after the second period. DeSanto began the third period in the bottom position and escaped quickly to take a 6-5 lead. Gomez then added a takedown, but was immediately reversed by DeSanto. After a challenge by Iowa State Gomez was awarded an escape to tie things back up at eight points each.

With Iowa State needing bonus Gomez went for the whip over and put DeSanto on his back looking for a fall that would win his team the dual. Gomez would settle for an individual upset as DeSanto eventually worked off his back and to his feet for an esacpe. Gomez won the match 14-9.

One thought on “RAPID RECAP: Hawkeyes Hold Off Upset Minded Cyclones in Carver”