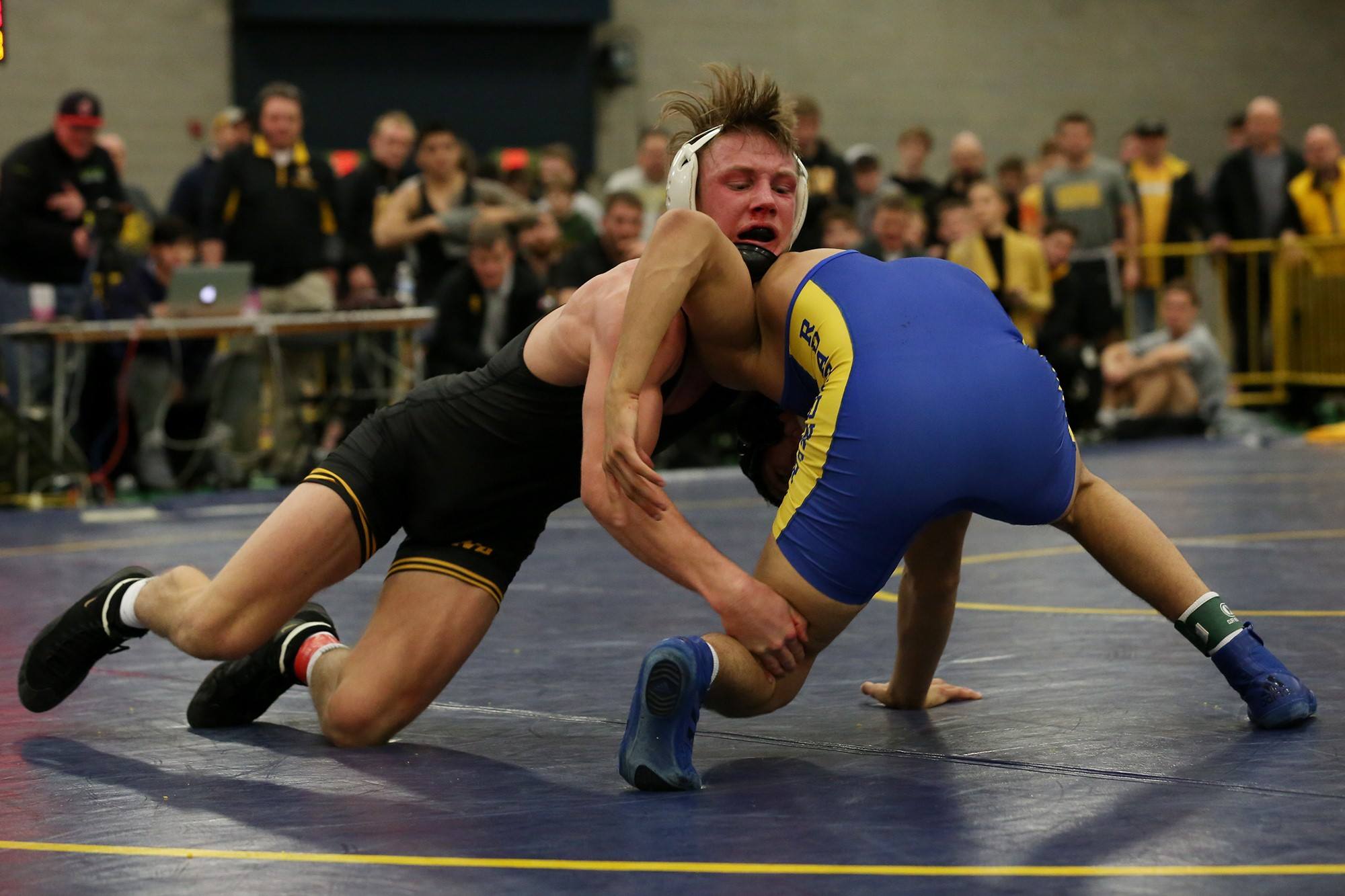 The Iowa Hawkeyes improved to 3-0 in what was their first dual against ranked competition when they downed #18 31-10 inside Carver-Hawkeye Arena. The Hawks picked up four bonus point wins, including falls at back-to-back weight-classes 133-141. Iowa also came out on top of both matches that featured a pair of ranked wrestlers.

Things were business as usual for sophomore Spencer Lee, who earned yet another technical fall at 125 pounds. The win was his third straight technical fall victory for the returning NCAA champion.

That kicked off a string of three straight Hawkeyes making their Carver debut, beginning with sophomore and #9 ranked Austin DeSanto. In his first career home match it was all DeSanto as he piled up a 5-1 lead in the first period, surrendering just one escape. In the second DeSanto chose the down position and scored a reversal off the whistle which put his opponent, Jon Gomez on his back. DeSanto then secured the fall just 23 seconds into the period to put an exclamation point on his night.

Not to be outdone, Max Murin also marked his Carver debut with a fall of his own. Like DeSanto, Murin built his lead on a steady diet of takedowns-and-release before securing a fall in the second period to put Iowa up 17-0.

Fans got their money’s worth during the 149-pound bout as #10 Pat Lugo looked to knock off #1 Matt Kolodzik in his Carver debut. It was a tight match all the way through with Lugo scoring a third period takedown to tie things at three points apiece, but Kolodzik managed to reverse Lugo and then scored again with time running out to take the match 7-4.

Sophomore Kaleb Young was able to get the Hawkeyes back on track with his 7-4 decision over Quincy Monday at 157 pounds. Monday had the advantage in the first period where he managed a pair of takedowns, but Young scored a reversal and completed the ride out. In the second Young tied the match with an escape in the second, and scored a takedown via a cradle to pull ahead 6-4. Riding time pushed Young’s victory to 7-4.

The Hawks notched their third fall of the evening when sophomore Alex Marinelli took the mat at 165 pounds. It was all business for the returning All-American as he piled on four first period takedowns to build an early lead. In the second Marinelli worked on his top game, whipping Tiongson over for the second period fall.

Princeton got their second victory of the night in the 174 pound matchup as it was freshman Myles Wilson making his Carver debut against Travis Stefanik. With a big first period, Stefanik opened the match with a takedown to Wilson’s back to take a six point lead he never looked back from. The match final was a 15-3 major decision.

That led into the night’s second and final ranked head-to-head meeting between Iowa’s #10 Cash Wilcke and #18 Kevin Parker at 184 pounds. It was Wilcke that struck first picking up first period takedown, and that was all that separated the two wrestlers until midway through the third period. With just over a minute to go Wilcke scored another takedown, and tacked on one more late to secure his ranked victory. With riding time the final score was 8-3 for the Hawkeye.

The Tigers #7 Patrick Brucki spoiled Connor Corbin’s home debut winning 10-3 over the freshman. Brucki controlled the whole match from start to finish and had nearly secured a bonus point for his team, but a late escape from Corbin took that away.

Closing things out was the final Hawkeye making his home debut as freshman Aaron Costello blanked Obinna Ajah 5-0 at 285 pounds to seal the dual to a 31-10 win. Costello scored the match’s only takedown, and also scored via escape, a stall penalty point, and riding time.