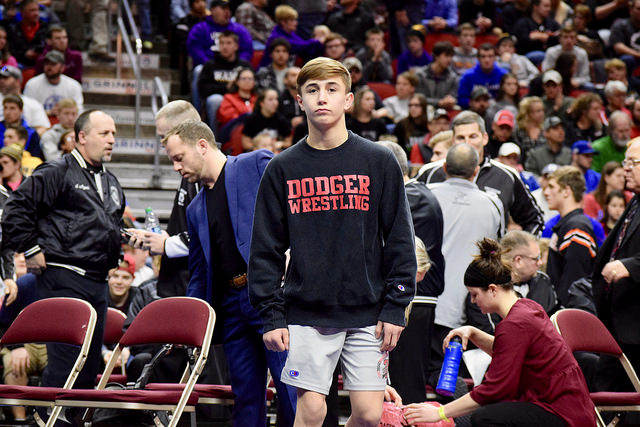 The secret is officially out. Drake Ayala is good at wrestling.

This past weekend the Fort Dodge sophomore put in a second place showing at the famous Super 32 tournament in Greensboro, North Carolina. That performance came off the heels of Ayala notching a big 9-5 win over the then #3 ranked Braxton Brown of Texas at the Agony In Ames event a week prior.

The truth is “the secret” about how good Ayala is wasn’t a very well kept one to start. While he is only entering his sophomore season for the Dodgers, Ayala has made his presence known nationally the last two summers competing at USA Wrestling’s freestyle nationals in Fargo, North Dakota.

A year ago Ayala lit the tournament up by tearing through the 88-pound bracket in the Cadet division on his way to a national title, and he followed that up with a third place showing at 106 pounds in July. If you are keeping track that’s three top three finishes for Ayala at two of the toughest high school tournaments.

Not to mention that in his freshman season for Fort Dodge he was the state runner-up at 106 pounds, with his losses coming to Mason City’s Cullan Schriever – who is considered the best prep in the state and potentially one of the best the state of Iowa has produced.

Given all of Ayala’s accomplishments it’s little surprise that’s Flowrestling ranked Ayala as the #2 wrestler at 106 pounds following the Super 32 performance. There is no denying that at this point he is certainly deserving.

As we head into the 2018-19 regular season we expect to see Ayala slide up a weight for the year and he should be the preseason favorite to win the 3A 113 crown.