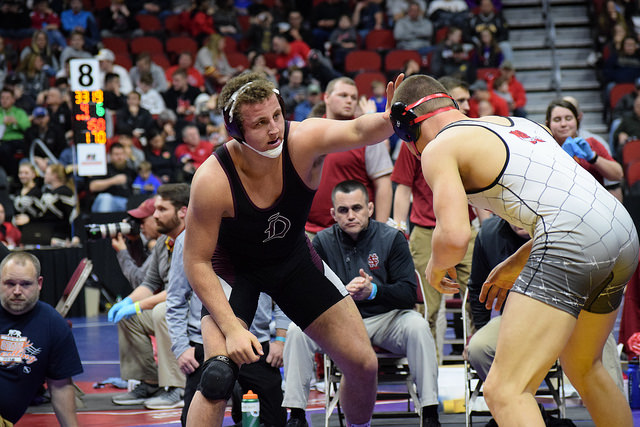 Dowling Cathloic’s standout Greg Hagan has made his college decision, as he informed IAwrestle last night that he had committed to Angel Escobedo and Indiana University. Ranked #38 on IAwrestle’s Fab 50, Hagan picked the Hoosiers over Old Dominion, Maryland, Augustana, and Grand View.

According to Hagan the relationship with Indiana began when Associate Head Coach Mike Dixon began recruiting Hagan while he was on the Old Dominion staff. Dixon continued interest in the Iowa prep paid off with Hagan taking his official visit last weekend, followed by his commitment last night.

“The relationship started when Dixon was recruiting me at Old Dominion.” Hagan told IAwrestle of his decision, “When he got the job at Indiana he continued to recruit me and I fell in love with the program and Escobedo’s way of coaching the Hoosier mentality.”

A bit of a late bloomer, Hagan peaked many fans interest when he reached the 3A state finals at 220 pounds last winter. He then was selected to compete for Team Iowa at the AAU Disney Duals where he went 10-1 including several big wins.

“I realized I could go Division I by the caliber of opponents I was facing. I took sixth at USA Wrestling’s Folkstyle Nationals and went to Disney Duals and beat the #5 kid in the nation by six points.”

Hagan concluded the interview by giving IAwrestle some insight on his season goals and by thanking all of the individuals that helped him reach this point in his career.

“My goal this year is to win a state title, go undefeated, and compete at the national level to get my place in the rankings. I would like to thank my parents, my family, coach Stanley, Ty Knowler, Pablo Ubasa, Tom Wilson, Brant Parriott, TJ Moen, and all the coaches that helped me along the way to achieve this goal.”