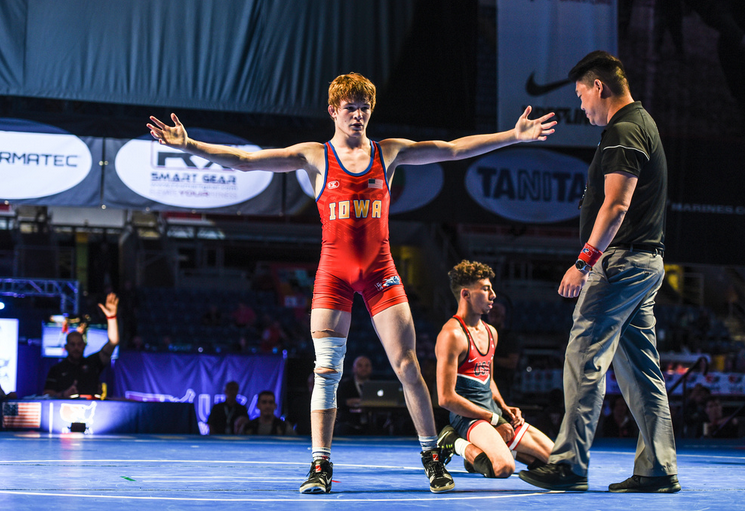 The Hawkeyes have hit the mother lode adding a two more wrestlers to their 2020 recruiting class as Mason City star duo Cullan and Colby Schriever have announced their verbal commitment to the the University of Iowa. This news comes off the heels of Arizona prep Jesse Ybarra committing to Iowa earlier today.

He’s only heading into his junior year of high school, but Cullan Schriever is already one of the state’s most accomplished wrestlers as far as credentials go in our history. Last fall Cullan became the first Iowan to ever win the Super 32 high school division, which rank as one of the nation’s toughest folkstyle tournaments (some consider it as the pinnacle of elite folkstyle tournaments). In addition to that the prep has captured freestyle national titles in both the Cadet and Junior division out at Fargo, and he also has a pair of state titles to add to his resume.

That’s not to say that Colby isn’t accomplished in his own right, as the larger twin Colby placed seventh at last year’s state tournament, with one loss coming to Brody Teske of Fort Dodge and his other loss a tight decision that went to Des Moines East’s Brock Espalin. Colby has several freestyle and Greco-Roman state titles to his name, and was a Cadet All-American at USA Wrestling’s Folkstyle Nationals.

The Hawkeyes have had many successful brother duos come through the program, but they have also developed twin brothers to tremendous success. The most glaring example of course is Tom and Terry Brands, the team’s head and associate head coach. The pair won five NCAA titles as Hawkeyes back in the 1990s, and both won gold medals at the sport’s highest level of wrestling. Two other famous twin brothers that experienced a heft amount of success while at Iowa were the Steiner brother Troy and Terry, and the Banach duo of Ed and Lou.

The Schriever brothers join Ybarra and Minnesota native Patrick Kennedy in the class of 2020. As far as rankings go Iowa now has three wrestlers in the class of 2020’s top 30 according to The Open Mat’s rankings. Kennedy (#10) and Schriever (#12) are inside the top 15, while Ybarra (#26) falls just outside the top 25. Iowa is also heavily pursuing New Jersey’s #2 ranked Robert Howard. If they manage to land the east coast native’s talents as well the Hawkeyes will be hard pressed to move off the top spot for #1 overall recruiting class in 2020.

Proud and excited to announce that I have committed to the University of Iowa to wrestle and further my education! Thanks to everyone who’s brought me to this point! #FightForIowa 🐤 pic.twitter.com/KObin9CVWz

Proud to announce that I’m going to be a Hawkeye! Go Hawks! pic.twitter.com/OovzxOSVMj