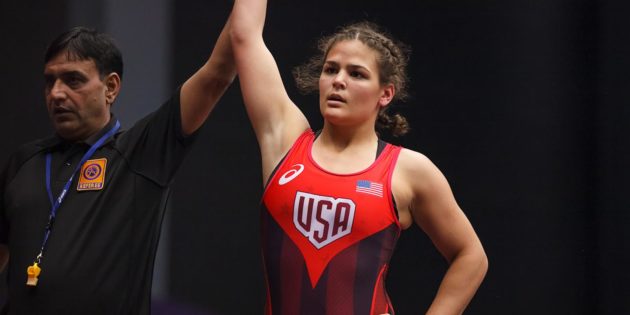 “It’s exciting to add four World Class athletes. All four are here for the right reasons. They are here to win titles. It’s that simple. Landing in Iowa City was an easy decision for them because they know what we are about and the dedication it takes to win at this level. I expect them to make a big impact on the program as a whole. Their passion and energy for wrestling will cross over like many other great examples we have throughout the program.”

“The quality of athletes we are adding to the HWC is in line with the philosophy of the entire program. We want the best partners for the best wrestlers in our wrestling room. Alli Ragan reached out to Forrest, Michaela and Kayla and the three of them were excited to join the quest to be the best wrestlers they can be in Iowa City.

The same is true of Nodirjon. He adds to what we are doing!”

Nodir is originally from Uzbekistan. He wrestled Thomas Gilman in the Worlds last year and he will be attending Kirkwood Community College this fall. He will be a great workout partner for our lower weights. He has hopes of World and Olympic medals.

Nodir will compete for Uzbekistan at 57kg in Budapest. Nodir finished 8th in the World Championships last year in Paris, reaching the quarter finals. Took 3rd and 5th in the Junior Worlds.

From Nodir: “The Hawkeye Wrestling Club is known to the World as having some of the top wrestlers and top lightweights on the planet. My experience alongside Thomas Gilman, Cory Clark and Spencer Lee, along with the other great workout partners in the room gives me the best chance of achieving my lifelong goal of winning an Olympic title. I’m grateful for being able to compete under the HWC banner and ready to prepare with these studs for Budapest in October.”

Forrest is a World Team member on the women’s freestyle team in 2018 @ 65Kg. Forest will Represent the USA in Budapest at 65KG. She is ranked #3 in the World by United World Wrestling Rankings. She will compete for another world title in November at the U23 World Championships in Bucharest, Romania

Forrest: “I am very excited to be joining the Hawkeye Wrestling Club. This is an amazing opportunity for the girls and me. We are grateful for the coaching staff opening up their program to us. I think making the move here before Worlds is going to give me the competitive edge I need to bring home a medal. I love the energy in the room from the team, the Brands, Mark Perry, and Morningstar. Everyone, really… The coaching staff here is phenomenal and so is the amount of knowledge they have about the sport. They have been so welcoming and helping us jump right into the mix. I can’t wait to represent team USA and HWC in Budapest!!”

Michaela is an elite level women’s freestyle wrestler. She finished 2nd in the World Team Trials. Finished 2nd in the Senior US Open as a 18 year old Senior in High School. Lot of promise. Michaela’s mother is a University of Iowa Graduate. Big impact player on the women’s scene with age.

Michaela: “I have always been an Iowa Wrestling fan and especially fans of the Brands brothers. But after seeing the room in person and working out in the room, I knew right away it was a special place and THE place for me. The mentality of the program training and competing wise is everything that I believe in. I believe it will get me to reach my goals. I also thrive being around intense and passionate people like Coach Perry, the Brands and the overall environment of the team. I know this team and staff will push me to my limits and help me develop into the person and wrestler that I need to be to become successful at the highest level.”

Kayla just finished college, winning her 4th National Title. She is already ranked #1 in the World at 62kg by United World Wrestling Rankings. She will compete for a U23 World Title in November in Bucharest, Romania.

Kayla– “I’m expecting this room to be very technical but also intense at the same time. Iowa has a style that not many rooms in the world can match. The passion and drive that all the athletes bring to practice is just incredible to be part of. The HWC coaches are World Class and I can’t wait to start picking their brains. The men’s side of the HWC is obviously filled with studs, but now we have a strong team of women as well. I cannot wait to start the journey to the Olympics with my new teammates.

My dad, Lee Miracle, has been my college coach, and its been quite a ride. No words will be able to express how much he has done for me in the wrestling room or in life. He has shaped me into someone I am proud to be today. I’ve been at Campbellsville University for four years now and have seen some success, especially on the college scene. Now that chapter of my life is over and all my focus needs to be on the World and Olympic Championships.”